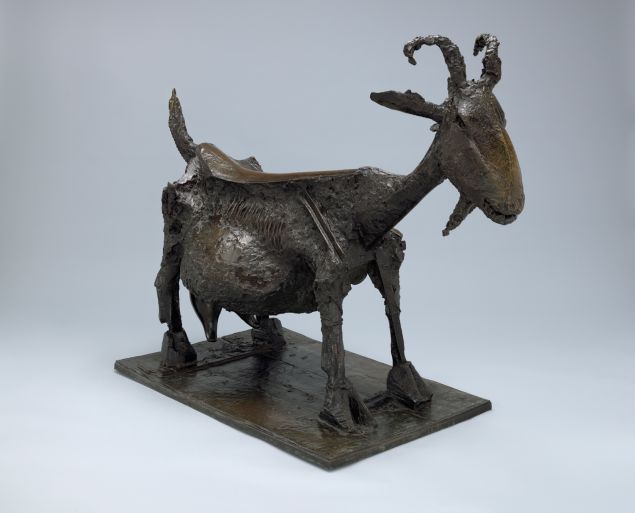 Even the most avid and knowledgeable Picasso aficionados are in store for some surprises in “Picasso Sculpture.” The Museum of Modern Art’s sprawling fall blockbuster exhibition, which runs through February 7, 2016, is the most comprehensive U.S. exhibition of Picasso’s sculptures since a 1967 exhibition at MoMA.

There have been seismic changes since then, in the world in general, and in art. Picasso is gone, but his posthumous reputation has grown tremendously, particularly in the area of sculpture. This landmark show of some 140 works, some never before shown in this country, will no doubt add significantly to his legacy.

During his lifetime, Pablo Picasso (1881-1973) rarely showed his 3-D works. According to some experts, either he felt they were too personal, or he was insecure about their importance relative to his paintings. There was certainly no cause for the latter concern. As evidenced by this revelatory show, the conceptual breadth and scope of his 3-D works is on par, at least, with his game-changing achievements in painting. 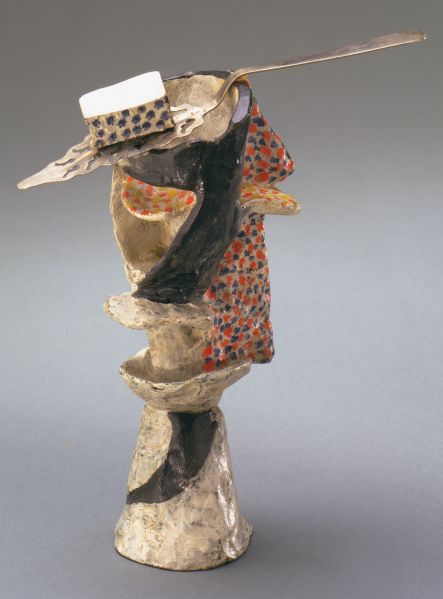 After Picasso’s death at age 91, his estate began to donate the sculptures to various public art institutions, primarily to help offset the enormous inheritance taxes owed to the French government. As more of the sculptures eventually came into public view, the unique inventiveness and sheer beauty and power became clear. Among the major beneficiaries of these gifts, often administered by Picasso’s widow, Jacqueline, were MoMA, and the Musée national Picasso-Paris, which collaborated on the current exhibition, co-organized by MoMA curators Ann Temkin and Anne Umland.

While Picasso almost never lent his sculptural works to galleries or museums for exhibition, let alone offered them for sale, he cared deeply for them. He kept them close at hand, like pets. For that reason, many of his experiments in 3-D art were well known to friends, artists, colleagues and confidantes—sculptors Alberto Giacometti, sometime-collaborator Julio González, and the photographer Brassaï among them—who saw the works in Picasso’s home or studio. Brassaï’s photographs of sculptures in Picasso’s studio fill one of the exhibition’s side galleries.

Trained as a painter, but self-taught as a sculptor, Picasso demonstrated a certain sense of wild abandon in 3-D works that sometimes trumped his most radical experiments in painting. As more insiders recognized these accomplishments, Picassoid elements soon appeared in sculptures by a number of his artist friends and acquaintances. 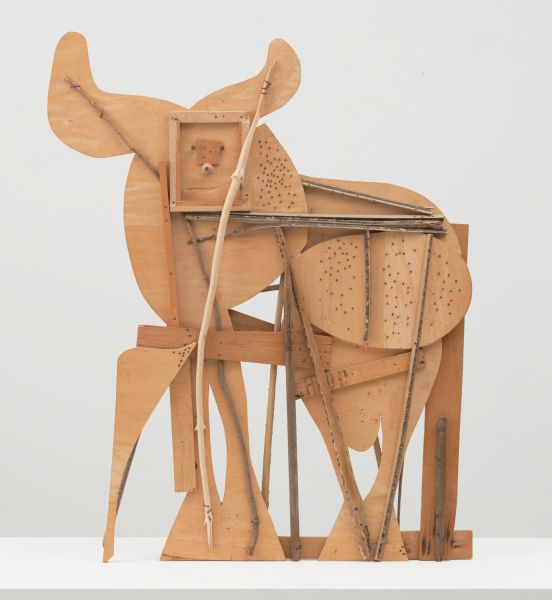 The impact of Picasso’s sculpture continues to be felt by many artists today, including Jeff Koons. At the exhibition’s opening, Koons told me that Picasso’s so-called Classical period in sculpture of the early 1930s—when he created in plaster a series of imaginative portraits of his then-mistress Marie-Thérèse Walter—influenced his own recent “Gazing Ball” series. In typical works in the series, Koons features a blue glass sphere incorporated into a white plaster cast of a figure, usually heroic or mythological, appropriated from well-known Greco-Roman statuary.

Koons made the comment while looking at Picasso’s Head of a Woman, a work created in 1932 in his studio in Boisgeloup, near Paris. The work is one of the most abstract examples in the Marie-Thérèse series. Just over two feet tall, the plaster sculpture shows the woman’s facial features reduced to long, tubular forms and a small ,spherical shape. It is one of the highlights of an arresting gallery. 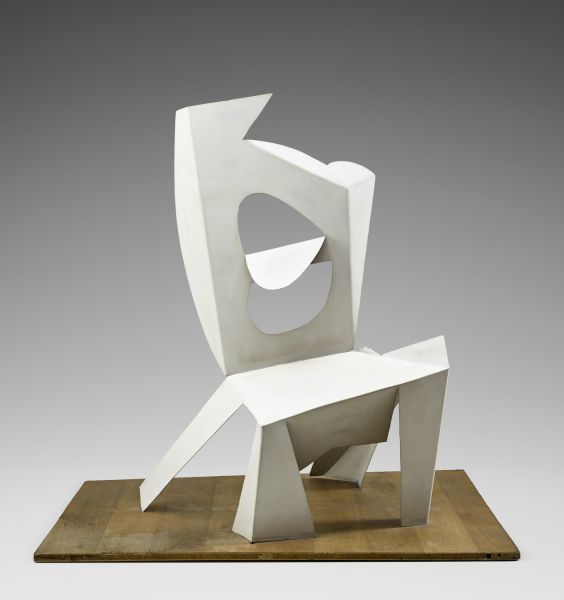 Trained as a painter, but self-taught as a sculptor, Pablo Picasso demonstrated a certain sense of wild abandon in 3-D works that sometimes trumped his most radical experiments in painting.

Arranged more or less chronologically, “Picasso Sculpture” is a visually stunning exhibition with no wall labels to identify the works, and only a few explanatory wall texts covering various periods in the artist’s career. (However, the curators do provide a small booklet illustrated with outlines of individual pieces, giving titles, dates and provenance.)

As one moves through the exhibition, each gallery is more striking than the next. The first room contains Picasso’s earliest works, including the clay figurine Seated Woman (1902), as well as a small bronze face Head of a Picador with a Broken Nose (1903). These rather conventional pieces show Picasso absorbing and mastering the figurative traditions of 19th-century sculpture while still in his early twenties.

His first truly experimental works were inspired by his frequent visits to ethnographic museums in Paris, tap into the abstract forms and frank eroticism of non-Western tribal cultures. Picasso’s forceful totems in wood from 1907 and 1908 often recall certain sculptures by Paul Gauguin, whose work he admired. 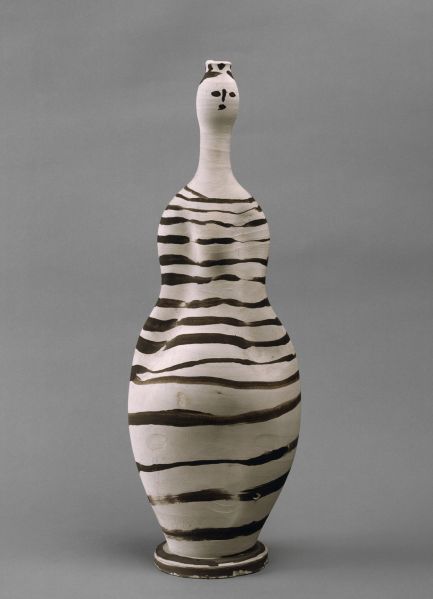 Paralleling his Cubist breakthroughs in painting, which he developed in tandem with Georges Braque, Picasso independently produced his first truly radical sculptures beginning in 1912. Key Cubist-style pieces here include the wall reliefs Still Life with Guitar (1912), and Guitar (1914), in paperboard, and sheet metal, respectively, plus rarely exhibited tableaux-like painted wood reliefs. The dynamic Cubist play of spatial depth in these pieces matches that of his contemporaneous 2-D works.

One of the most notable curatorial achievements of the exhibition is the reunion of all six of Picasso’s series of small painted bronzes, Glass of Absinthe, not shown together since 1914, when they were made.

In the bronzes, Picasso depicts the sugar cubes—which were part of the absinthe-drinking ritual—variously painted, some in bright colors. Also incorporated into each design is a real spoon of varying type. Despite the diminutive scale of the series, the six Glass of Absinthe pieces constitute a monumental breakthrough in modern sculpture.

Here, Picasso introduces color into bronze abstract sculpture, and he heralds the advent of assemblage, as we know it today. He added found objects into the work as formal elements, with a great deal of humor, and without the irony of Dada or anti-art gestures. Masterpieces include the iconic Bull’s Head (1942), a bronze casting of an actual bicycle seat and handlebars; and one of my favorites, Baboon and Young (1951), which incorporates a bronze cast of a toy car to represent the baboon’s facial features. It is apparent throughout the exhibition that many of Picasso’s most innovative sculptural ideas grew out of  objects he recreated as toys for his children to play with.

Perhaps the most exciting space is devoted to sheet metal sculptures made between 1954 and 1964, which contains numerous painted-metal maquettes, several of which were intended as large-scale public works, such as the charming folded-metal portrait bust Sylvette (1954), an imaginative rendering of a favorite Picasso model of the 1950s. This work was eventually transformed into a concrete monument, one of Picasso’s numerous collaborations with Norwegian artist Carl Nesjar. The piece was installed in 1968 at the New York University Village/Silver Towers complex, where it stands today.

While many of the works in “Picasso Sculpture” have considerable historical significance, the exhibition offers something more than a competent retrospective. The show appears lively and of-the-moment because, among the dizzying possibilities and ideas for sculpture that Picasso proposed throughout his career, many have yet to be fully explored and realized. In absentia, Picasso graciously invites or challenges young  artists to do so.