A debate between candidates seeking to replace former Brooklyn Assemblyman Alec Brook-Krasny led to bitter charges of financial impropriety and possible malfeasance. At issue was Democratic candidate Pam Harris’s nonprofit, Coney Island Generation Gap, which Republican contender Lucretia Regina-Potter pointed out is headquartered in her opponent’s home—and alleged that Ms. Harris received rent and a salary from the publicly-funded organization.

“I don’t have to hide behind a not-for-profit that perhaps charges—collects—charges rent and pays it to myself,” said the Republican, who brought numerous documents to the Dyker Heights Civic Association forum showing the thousands of dollars in funds the group had received from the city, courtesy of Coney Island Councilman Mark Treyger. “And you know what, sorry, it’s a disgrace. If somebody’s running a nonprofit out of their home, they shouldn’t be collecting rent, nor should they be collecting a salary. This is not what we need!”

Ms. Harris initially said the claims left her too distraught to respond, though she later fiercely denied her opponent’s claims to the Observer. She said she had never received any compensation from Coney Island Generation Gap, and said the only space it had paid rent for in its 12-year existence was from her next door neighbor for a studio—and moreover argued that the group would have been unable to receive public funding if she had not obeyed all statutes regulating nonprofits.

Coney Island Generation Gap offers arts programs for youth, as well as computer and media training for people of all ages.

The shouted allegations marked the end of an otherwise tame debate, as the two had only lightly sparred earlier over charter schools and ways to support small businesses.

The district—comprising Coney Island, Dyker Heights, Bensonhurst and Bay Ridge—is overwhelmingly Democratic. But experts say there’s a possibility Ms. Regina-Potter could pull out a victory because Ms. Harris is a black candidate seeking to represent a moderate district that is more than two-thirds white.

If elected, Ms. Harris would be the only African-American holding a majority white seat in the city. Were Ms. Regina-Potter to triumph, she would be the only GOP assemblywoman from Brooklyn (Republican Assemblywoman Nicole Malliotakis represents an adjacent part of Bay Ridge, but most of the district is on her native Staten Island).

Mr. Brook-Krasny, a Democrat, stepped down from the seat in July and backed his chief-of-staff Kate Cucco as his successor. However, in special elections to fill a vacancy, an elected panel of insiders called the county committee picks the party nominee—and Mr. Treyger and his allies were able to swing enough votes on the committee to secure Ms. Harris the Democratic line.

Story updated. The Observer originally reported that Ms. Regina-Potter had complained of a “whore of corruption” in Albany. She maintains that she in fact said “core of corruption.” 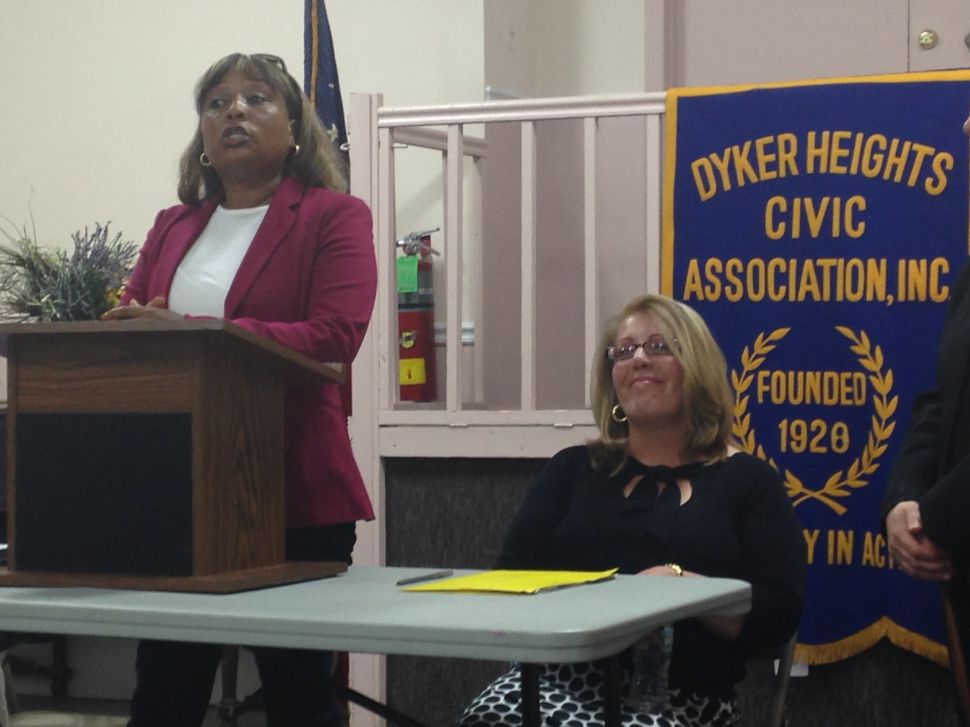