Mayor Bill de Blasio said today that judges should consider whether someone might be dangerous while setting bail or sentencing them to drug treatment instead of prison—and argued that doing so would have stopped a man who allegedly murdered a police officer Tuesday.

“Tyrone Howard would have gone to jail. He would not have continued to poison the community around him by selling drugs. He wouldn’t have been roaming East Harlem on Tuesday, and one of NYPD’s good, decent, hard-working cops would still be alive today,” Mr. de Blasio said at a City Hall press conference today.

Mr. Howard is charged with murdering police officer Randolph Holder, 33, in East Harlem, during a shoot-out over a stolen bicycle. Police had arrested Mr. Howard a year earlier in a massive sweep of people allegedly selling drugs in nearby public housing developments, and while the district attorney’s office asked for six years in prison, a judge sentenced Mr. Howard to drug diversion—a rehabilitation program. Mr. de Blasio argued someone with Mr. Howard’s history of many drug arrests should not have been given such an opportunity.

Mr. de Blasio today proposed changes to state law that would require a judge to consider dangerousness in setting bail (currently they can only consider flight risk) and in sentencing a defendant to drug diversion. He is not the first person to call for the state to consider dangerous in setting bail—Chief Justice Jonathan Lippman has been urging such a change since 2013. The judge has coupled that with reforms to ensure low-level, nonviolent offenders do not languish in jail simply because they can’t pay low bails, something Mr. de Blasio also supports.

“Our bail laws are backwards and ridiculous and they’re unfair. On the one side, judges are precluded from considering public safety,” Judge Lippman told the Observer in a telephone interview today. “On the other side, people are kept incarcerated when they’re non-violent, not a threat to anybody and they can’t afford bail.”

It is unclear whether a law requiring a judge to consider dangerousness before sentencing Mr. Howard to diversion would have changed the judge’s decision: Mr. Howard had never been convicted of a violent crime—only drug crimes. Mr. de Blasio said a judge should have considered a 2009 shooting for which Mr. Howard was arrested but never indicted or convicted; but he also argued that Mr. Howard’s repeated selling of drugs alone indicated that he was dangerous.

“Here’s someone who never responded to the instructions, who violated orders of courts consistently while continuing criminal activity. And we know that the 2009 shooting was visible on the transcript,” Mr. de Blasio said. “So I would argue in this case there was ample evidence to go a different path.”

After the press conference, the mayor’s spokeswoman and his Criminal Justice Coordinator Elizabeth Glazer said the administration believed selling drugs is a dangerous crime—which is why the Legal Aid Society is opposed to considering dangerousness in setting bail, said Justine Luongo, the attorney in charge of the society’s legal practice.

“This is exactly the problem with adding the dangerousness—[the idea] that selling drugs is a dangerous thing. But actually the entire country is moving to decriminalizing many of these things, and providing more alternatives to incarceration,” Ms. Luongo said. “So when the mayor takes the position that drug cases are dangerous, this is why we’re opposing this—because this notion of an over-broad definition of what ‘dangerousness’ is is going to have a disproportionate effect on people with mental illness, poor people and people of color.”


Ms. Luongo noted those people are exactly the kinds of New Yorkers Legal Aid represents. Unsaid was that they are also the demographics the mayor most often speaks about helping through his policies.

Judge Lippman said he couldn’t discuss Mr. Howard’s pending case. But asked generally whether drug crimes could be considered “dangerous,” he said that judges don’t make the laws, and that some drug violations are “very serious” while others are less so—though the trend has been to use drug diversion more, not less.

“The judge has to have some discretion. The whole trend in this country—conservatives and liberals—is away from tying the hands of the judges and is away from criminalizing everything and throwing everybody in jails,” Judge Lippman said. “But you’ve got to have laws that make some sense.”

Mr. de Blasio’s rhetoric today—coming in the wake of three police officer murders in the last year—was different from past discussions of of bail, when he’s focused more heavily on the plights of people who languish in jail because they cannot afford bail.

“It was inconceivable to me that someone like this should’ve been on the street. Some people are irredeemable,” Mr. de Blasio said of Mr. Howard. “I’m a progressive person, I’m a humanitarian, but I can also tell you some people are irredeemable, and unless they are treated very, very differently, they pose a danger to our society and we have to look that in the face.”

The mayor has had to counter a perception that he is soft on crime ever since he ran for office on a promise of reducing the use of stop-and-frisk and reforming the NYPD. Late last year, when two police officers were assassinated in Brooklyn, police unions and rank-and-file officers were in open revolt, turning their backs to the mayor in hospital hallways and outside funerals. Mr. de Blasio has worked to change that attitude—on Tuesday, he appeared alongside Patrolmen’s Benevolent Association president Patrick Lynch. At this afternoon’s press conference, he stood alongside Roy Richter, president of the NYPD Captain’s Association.

After the press conference, a reporter for Politico New York asked Ms. Glazer, the criminal justice coordinator, whether there would be any scrutiny of the NYPD’s warrants unit. Mr. Howard had missed several court dates, and he was wanted in connection with a September 1 shooting. Officers had tried to apprehend Mr. Howard 10 times, most recently on October 16.

Ms. Glazer’s answer to the question about the warrant squad was an expression of disbelief it had been asked.

“So you’re laying the murder of a police officer at the feet of the NYPD,” she said, “which is quite extraordinary.” 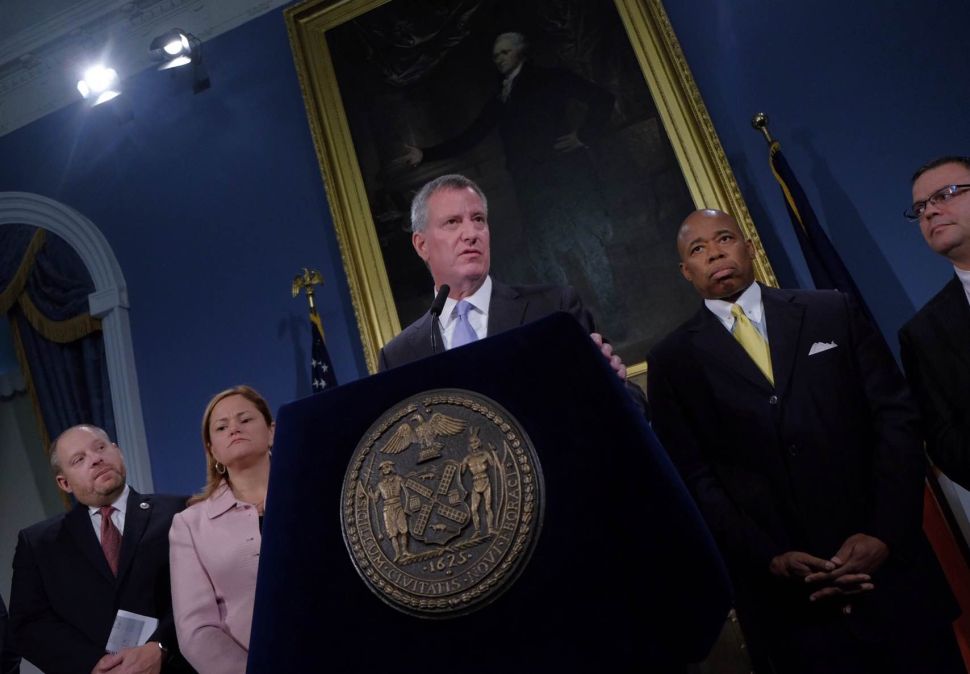