Compared to the fan screening of The Walking Dead the night before–where the siren call of zombies and Norman Reedus filled Madison Square Gardens to capacity–the turnout for AMC’s other post-apocalyptic program, Into the Badlands, had a modest Comic Con turnout. Maybe it was only some 150+ people who filed into one of the seemingly endless Javits Center convention rooms to observer a panel for a show that doesn’t premiere until November 15th, and is loosely based on the Chinese story Journey to the West. But the two events shared one thing in common: they were both attended past capacity.
[youtube https://www.youtube.com/watch?v=5KyHy4KRvIc&w=560&h=315]
Though its plot may seem more “early aughts foreign film sensation” than “the next hit show from the network that brought you Breaking Bad and Mad Men,” Into the Badlands boasts a much more adventure-driven premise: in it, a transient warrior, Sunny (Daniel Wu, also an executive producer on the project) wanders a future where there are no guns–Snowpiercer, much?– and the feudal caste system has made a comeback, in a hardcore, Crouching Tiger-kind of way. After finding a special boy M.K. (Aramis Knight) literally inside a box , Sunny begins an epic quest through a world where martial arts imposes the martial rule.

Besides having the obvious appeal of nerd culture–swords! Hot, badass ladies fighting! Flying kicks!–AMC’s newest offering is notable for having such a strong international contingent both in front and behind the cameras. Stephen Fung is another executive producer of Into the Badlands, and more awesomely, is the show’s fight director. Along with the perfectly nick-named Master DeeDee, Fung spent weeks training the actors in a “Martial Arts Boot Camp” before principal photography ever started filming.

After the panel, we spoke to Fung about the process of turning Hollywood actors into believable warriors.

Observer: What were some of the difficulties of translating this cinematic art form for the small screen?

Stephen Fung: It’s the action’s journey, if I may put it. It’s not a movie, where it’s a one-sitting experience and then it’s over after a couple hours. This could be many seasons. So I had to think about: Well, I can’t throw everything in the first season, let alone the first episode. We can’t show the full range of martial arts right away. The pilot has to be good; it has to have meat in it, but we can’t throw every trick in there.

So what we did was map out the characters and their journeys, and what kind of weapons they would choose, and we start from there. We start out with Sunny fighting bare hands, since we want the audience to see how good he is without the blades. We’ll save the blades for the next fight. So the tree fight: that’s a gritty style, a certain look; then the rain fight, which is more poetic. You just saw the fight with the Widow (during the panel), which is how a very strong woman fights, and it’s completely different than the other ones we’ve seen before. (Ed. note: you won’t be looking at stiletto heels the same way again.)

Each character has its own strength and weaknesses. Quinn, who is the most powerful baron in the land, he fights with one broad sword, which is all about power. It’s not about fancy moves, it’s all about slashing through your enemies.

Observer: So it’s all about the visceral experience of understanding the character through their fighting style?

Fung: Exactly. Another thing we wanted to do was to keep it pretty grounded. Nothing too supernatural in the fights. No flying.

Observer: There are videos online of you and Master Dee Dee (the martial arts coordinator) training the cast at a martial arts boot camp in preparation for the show. I have to think this must have been a STEEP learning curve for some of the actors. Can you talk about this process a little bit?

Fung: The boot camp took place two months before principal photography. And I’ve always believed that boot camps aren’t just for the actors to be prepared physically, but mentally. To get as close to the fighter’s mentality as possible. So we had people training for 9 to 4. Usually the day started off with some warmups, exercises, and we’d end the day with practicing moves specifically designed for the fights in the series. After that, wire work. Then they’d get to go home and rest, while me and Master Dee Dee would stay and choreograph the fight, which I would shoot on my camera. I’d go home at night, and edit it really quickly.

Then I’d bring it to the directors, and we’d talk about ways to make it better.

Observer: Which actor would you say is the most improved after the camp?

Fung: I think for sure Emily (Beechum, who plays The Widow) and Aramis (who plays M.K.) because he had so much work to do on the wires. You might be able to quick very high and well on the ground, but once you’re on the wire…the way you pivot, the way you use the power, it’s different. Because Aramis fights…differently, without giving too much away.

There’s a lot of wire work in Hollywood, and it’s used brilliantly. The difference is in China we’d have men physically holding the wires and pulling the actors up, whereas here it’s mechanical. It’s pretty electronic. But for this, we needed the feel to be so specific, the lands to be so different, that it was very difficult to do with machines. So that’s one of the differences.

Observer: What most surprised you about moving these fights from boot camp to location?

Fung: The fights themselves were very similar. The widow scene is almost exactly the same, but that’s because, you look at it: it’s all taken place in one large room. There’s some elevation, but it’s just like the place where we practiced. Now take episode two, where it’s a 50-1 fight scene, but it’s in a factory, and there are different levels, and by the end Sunny is on different levels of beams. We couldn’t really choreograph it, because our (training complex) was just one flat layer. We just had to count on our experience.

Some of it is surprisingly good. When we do the Hong Kong style, there is quite a bit of improvisation. That’s why we put a lot of pressure on the set decorators and art directors for the show: we couldn’t just make it up out of thin air, or look at a blueprint and imagine what the fight would look like.

Observer: It seems like the show has a very visceral element to it.

Fung: The thing about Hollywood is you guys have the best technology, the best equipment and all that. There’s a new convention call the Movicam, which is a cross between a handheld cam and a steadicam. And the great thing about the Mobi-Cam is that you can have these cinematic big shots AND that Hong Kong film feel, like you are there in the room during the fight, which is all handheld. So for the opening fight, we had a clipper with a camera jumping down together with Sunny on wires. You see Sunny go down, and then the camera follows.

Observer: Do you think the show’s Chinese influence gave Badlands such great roles (and fights) for women?

Fung: Since the early days of Chinese cinema, there have been really strong female leads. From Mulan to Crouching Tiger, and I think a lot of that has to do with the fact that female fighting is very poetic. It’s sexy. It’s just how their bodies are designed. When you see The Widow fight, she has these very specific stances that look good.

That’s the thing about teaching martial arts the Chinese way as opposed to Western cinema: the rhythm is different. Hong Kong is very “fight, fight, fight,” but then you break up and go into a stance. So at the end of the day it’s not about which martial arts style is being used, it’s about what looks cool. It’s the most important thing, because it’s the most unusual aspect of what this show is about. 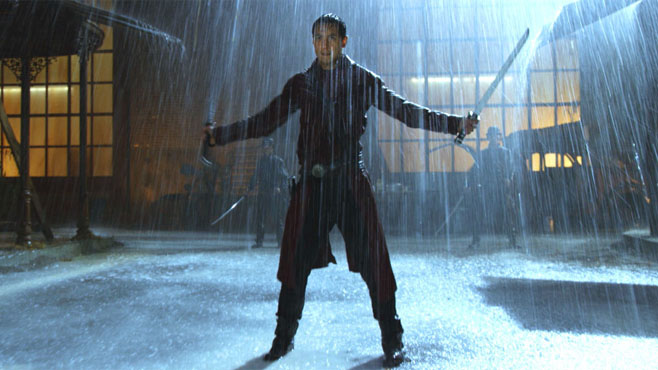