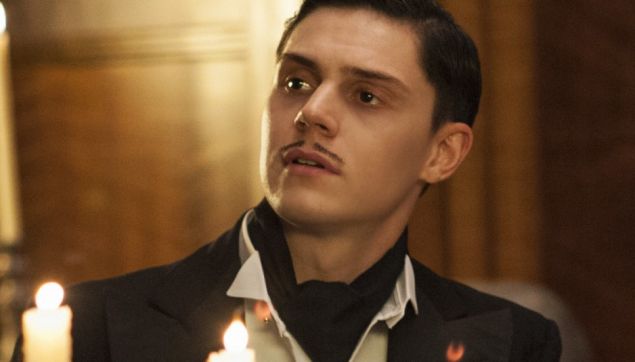 “Murder and capitalism and trains, old sport!” -Something James Marsh would say on this show. (FX)

Look, an on-time recap for American (Minus the Flyover States, New York or Any Part of California That’s Not Los Angeles) Horror Story! Honestly, I always look forward to Ryan Murphy’s AMFSNYAPCTNLAHS Halloween episodes, because they tend to be two-parters and the highlight of the season. First year was obviously the most imaginative, what with the ghosts being allowed to roam free outside, the introduction of Tate’s murdered schoolmates, Zachary Quinto in full queeny bitchiness, and Kate Mara going as “Zoe Barnes as a vengeful ghost” a couple years before we were introduced to television’s most problematic female journalist. Asylum’s Halloween episode hinted at a zombie apocalypse that never fully panned out, so they tried that again in the Coven season, which was…well, at least that time around it was entertaining instead of just confusing and depressing. Season 4–the season that shall not be named–intro’d Wes Bentley as “Guy With Another Head On The Back of His Head” whereas before we only knew him as “Guy Who Liked Watching Plastic Bags Float In the Wind While Staring Disconcertingly…Seriously, What Is That Dude Looking At?”

Yikes! Who thought giving THAT guy a gun was a good idea?

I mean, not that it matters. John Lowe is only shooting at ghosts, after all. This year we’re back to the season one model of throwing a bunch of funhouse ideas about Halloween in its “Devil’s Night” episode. It was like a Who’s Who of serial killers, all descending on the Hotel Cortez for what–we have to assume, even by cannibal standards–turned out to be a pretty “meh” dinner party thrown by the Host with the Most, Jay Gatsby James March. I mean, you get John Wayne Gacy (John Carroll Lynch in full clown makeup, a nice visual nod to his role as Twisty the Clown from season 4), Aileen Wuornos (Lily Rabe in Charlize Theron’s makeup from Monster), Jeffrey Dahmer (played by someone who wasn’t Evan Peters but boy did it look like him!), Richard Ramirez (Anthony Ruivivar, not playing a cop for once) and the Zodiac Killer all in a room together, and they only get THREE COURSES?!?! I mean I know these guys are dead and all, but between the salad and the amuse-bouche and desert, there wasn’t a main course in the entire meal. Even Dahmer was griping that he didn’t eat salad, so he got to sub in his appetizer for an androgynous model who, by the way, he didn’t even EAT. He just gave him a frontal lobotomy. John Lowe opted for the “bottle in front of me” when he decided he wasn’t an alcoholic after all, just a control freak. Wheee, time for two dirty martinis with an absinthe chaser!

Can we all agree that the Lowe family in general is just HORRIBLE at decision-making? Is Lowe even technically investigating a case anymore, or just attending dinner soirees with ghosts who manage to handcuff him not once but TWICE to different tables? His wife is being done turnt into a vampire somewhere else in the hotel so she can be with their missing son (ALSO IN THE SAME BUILDING!), there’s a serial killer still on the loose murdering people based on the ten commandments–which, as AMFSNYAPCTNLAHS expert Brian Moylan pointed out to me yesterday, isn’t the exact same thing as the guy from Se7en, whose M.O. was based on the deadly sins– and yet Lowe only shows up to work long enough to investigate a hot tip from the laundry lady.

A laundry lady…WHO HAS BEEN DEAD THIS WHOLE TIME! Duh-duh-duh! John gets pretty definitive proof, via an old photo from the Chicken Coop Murders (or whatever), that he had an IRL conversation with a ghost who tipped him off to a century-old murder, and what does he do? Leave the precinct, go back to the hotel, get drunk and propositions another ghost for sex! Unfortunately, that ghost is Aileen, who doesn’t want to give blow jobs so much as murder, no d’uh, because she’s has already stated for the record that she murders cops after they try to have sex with her. Like she said that to Lowe’s face, and Lowe’s response was “Cool…so….we’re still on for boning?” When Lowe finally pulls it together by beating the shit out of Aileen and cuffing her to a chair–not great…even as a ghost woman she’s still a lady!– he finally finally goes downstairs and START DEMANDING ANSWERS, only to immediately get distracted by a dinner invitation to a very exclusive party (according to the only human on staff, drag queen Liz Taylor). Ooh, shiny! Better investigate what’s for dinner!

It’s not just Lowe who is just terrible at seeing the truth all around him, even when the ghost of the hotel’s homicidal creator tells him pretty clearly to open his fucking eyes already. His wife, Alex, is a nurse, which means she ALSO only believes in what science can explain. I guess you could say that for a lot of people, regardless of their profession, but a nurse and a cop? No way, Jose. With those two, it’s just the facts, ma’am. Just the facts, and a complete disregard for procedure, methodology or hypothesizing…other stuff nurses and cops should technically be good at, but let’s leave it for now. How about human decency? Like, Alex discovers her believed-to-be-dead son right after handing her husband divorce papers because–and ONLY because–of their missing child, who she then finds standing in a hallway moments later. Maybe go back and tell your husband? Or call the police? Or wait, your husband IS the police, so seriously lady, just call your damn husband. You don’t even need a phone, he’s like, three doors down. Just say “HEY JOHN! I FOUND OUR KID! NEVER MIND, RE: THE DIVORCE!”

Nope. Instead, here is how Alex deals with the rediscovery of her long-missing, presumed-dead Holden, in order: brings him back to her house, takes his temperature (because SCIENCE, Y’ALL!), discovers that he’s running an opposite-fever of 75 degrees, asks him if he’s cold (SCIENCE, Y’ALL!), leaves him alone while she pours him a glass of orange juice, comes back to find her missing son with the unholy temperature hunched over the bloody corpse of their family dog with blood smeared all over his mouth, and takes him back to the damn hotel.

SHE TAKES HIM BACK. TO THE HOTEL. AFTER HE DONE GONE ATE THE FAMILY PET. WITHOUT EVEN CHECKING HIS TEMPERATURE AGAIN OR ANYTHING!

I mean, of course, this is a woman in shock. Who knows how we would react in a similar situation. How many of us would remember the standard procedure, as laid-out in the Child Rearing handbook every new parent gets in the delivery room? The manual which clearly states that in this scenario, the proper course of action is as follows:
1) check the child’s temperature for a second time;
2) pour another glass of juice (preferably apple);
3) burn the remains of family pet in convection oven (if no convection oven not available, toaster oven will do if set to “charred”);
4) exchange jaunty beret to jaunty fedora;
5) record a YouTube video of you and the child singing your favorite number from the hit Broadway musical Hamilton with the title “LAPD: PLEASE BE ADVISED MY MISSING CHILD HAS BEEN FOUND AND IS EATING DOGS!!! ADORABLE MUST WATCH!”;
6) check temperature a third time and if it’s not at least 80 degrees, proceed to final step;
7) return child to creepy hotel where you find him or her.

Alex, in her panicked state, clearly forgot the standard operating procedures and skipped right to number 7. Oh well. Maybe she wants to bring Holden to her husband so they can all tear up the divorce papers together?

Nope…she just follows him down to his pool coffin, which is either magical or has motion sensors (or both?!!) and shuts its lid after he lies down in it. Oh well, looks like Alex’s work here is done! A+ parenting, Alex! You beat the Final Boss level! Time to go!

I almost feel like Holden’s New Mommy might be better at child-rearing than Alex is, which is convenient because here’s the Countess, showing up to offer Alex eternal life with her son for being such a good negligent parent. Yikes? I would say Yikes to that. We know the Countess is pretty much keeping these vampire babies around so she can use their blood as some sort of filtration system for her own sustenance, but if she cared even a tiny bit about Holden, she’d keep Alex as far away from the kid as humanely possible. John too. Clearly, Scarlett–who decides to opt out of this mess and tells her dad she’ll be spending Halloween making banana creme pies with her grandmother–is the only Lowe family member exhibiting good judgement this week. Peace out, Scarlett! Way to make it through Disneyland without being abandoned by a guardian or kidnapped by someone dressed like Helena Bonham Carter in a Tim Burton movie!

Even when Alex refuses the Countess’s explanation that Holden has contracted a virus whose symptoms include eternal life + being awesome, she doesn’t go to the police with this information. Or back to the hospital. Or to her husband. She…just wanders around the hotel for awhile, presumably, before coming back and agreeing to be made into a vampire. Tristan is understandably upset, because if everyone gets to become a vampire, it’s like, barely even special anymore. Ugh! He might as well go slash his perfect face again and watch it miraculously heal! Being a vampire SUCKS!

Some loose threads (LOL, like this show was anything other than a billion loose threads all knotted together and then dumped in the garbage):
–Is John Lowe still looking for the Bible serial killer or what?
— Are Alex and Iris vampires if they’ve only drank vampire blood and not been drained themselves?
–Hey, what about that junkie from New Girl? How’s he doing?
–What about Ramona Royale and Donovan? Where THEY at?
–Is Hypodermic Sally a vampire or a ghost or both?
— Do the vampires know about the ghosts? Tristan talked to Marsh, but that’s literally all the interaction we’ve seen between the two supernatural beings that make up most of the Cortez’s population.
— Where is Will Drake and HIS son, the only two human residents of the hotel besides Lowe and Liz Taylor?
–Will Scarlett choose to live with her grandmother full-time, or will she strike out on her own, possibly as a serial killer alien Nazi who can go back in time and become the ringleader of a Florida side show, bringing this whole anthology series FULL CIRCLE? Please god, yes. 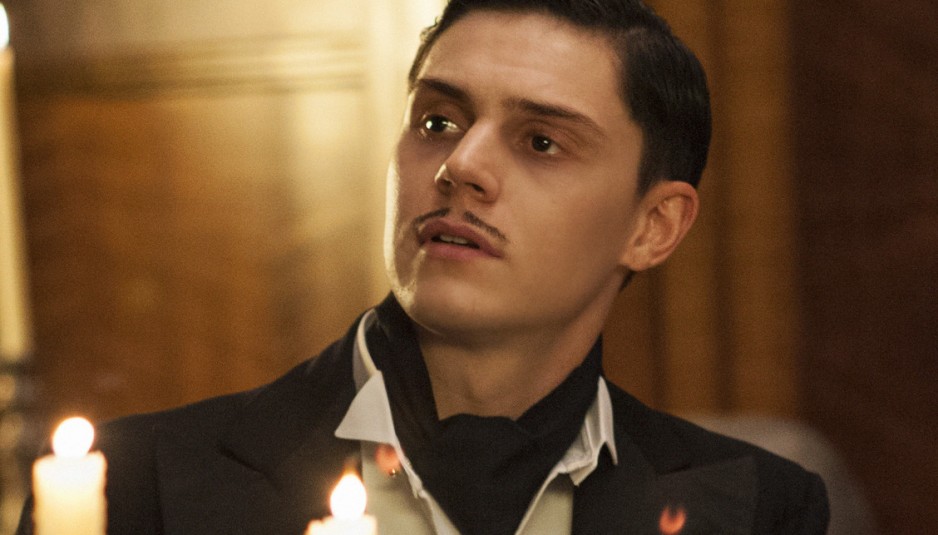