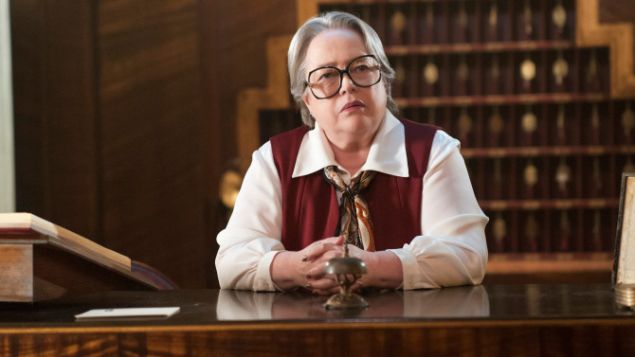 ARE YOU NOT TERRIFIED? Kathy Bates in American Horror Story: Hotel. (FX)

Okay guys, I’ve been putting this off all day, but I can’t avoid writing about the American Horror Story: Hotel premiere any longer. We’re just going to barrel through these notes, and then take a break and get pizza (it’s in the conference room). We deserve a treat.

To start with something positive (I’m learning how to do edits, can you tell?!), Lady Gaga is super compelling to watch. She’s like a piece of living art, which makes sense since I bet she wakes up every morning and purchases ten other pieces of living art from Larry Gagosian. I can’t tell how much is under the surface of her vampiric character, known as The Countess, but boy is the surface fun to watch. She’s got one thing that all other characters on this show have lacked, but what was sorely needed for a creepy monster tale: a total opaque void of a gaze onto which you can project any number of skin-crawling intentions. Compared to Lange’s painted-on Baby Jane face gumming the set pieces while singing Bowie in Freak Show, Lady Gaga is the definition of youth and novelty, which is to say: utterly unknowable. Does she love those kids she’s had kidnapped to live in her Mike TeaVee room with its oddly antiquated gaming consoles projected onto the set of 2001: A Space Oddity? Does she feel anything at all, towards anyone, even her devoted Russell Brand-dressing boytoy, Donovan? UNCLEAR! And that, in a nutshell, is what makes a good, terrifying character. She’s an Other. She’s Not Like Us. We don’t know what moves or compels her, unlike the seemingly petty-minded Devil in Asylum who kept laying out its schemes to anyone willing to listen with all the subtlety of, well, this guy.

The homages were also solid: got a little Hostel there in the opening–why didn’t the tourists just LEAVE SCREAMING after a monster jumped out from inside their bed? How stupid do you have to be to accept another room after witnessing an unholy creature like that?–but saved itself quickly by turning to better source material: Kubrick, Fincher (Wes Bentley seems to be tracking the exact same John Doe from Se7en, down to the modus operandi for victims of Lust) and Jarmusch’s languid vampire flick Only Lovers Left Alive. The last of which I’m sure is a beloved classic among the Murphy-Gaga demo. Just kidding: from the way this show operates, it’s clear Murphy doesn’t believe his fanbase has a longer attention span than squirrels (on Adderall).

On that note: JUMP CUT! Kathy Bates is once again kind of wasted in a role where she’s been given way too much back story for such a handy stoic. Remember how scary she was in Misery? That was because we didn’t have any scenes of Annie outside the point of view of her captive writer. We had no context for her crazy. Yet for the past three seasons, Murphy has fleshed out her characters with an almost pathological amount of Mommy Issues: she loves her daughters, but will fill their mouths up with feces and sew them shut! (Coven.) She loves her lobster-claw son, but is an alcoholic dying of liver disease keeping a terrible secret about his birth hidden behind a beard an incomprehensible Baltimore accent. (Freak Show.) Now in Hotel, we find out that her dowdy innkeeper/Slavic lady torturer persona, Iris, masks the grieving mother of Donovan who once pushed a hooker out a window for giving him too much smack. Also, she’s worried about getting kicked out of the hotel now that ownership has passed to over-it New York transplant/designer Will Drake (Cheyenne Jackson) and his son. How scary can a guy be when he can’t even figure out how to get his arms into his coat sleeves? 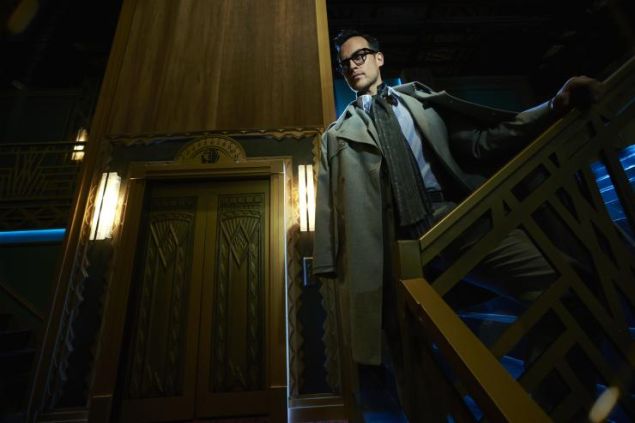 And why is his tie not attached to his shirt? Is this just Vincent Adultman??

JUMP CUT: Detective John Lowe (Wes Bentley) is a detective tracking down a murderer who is not Bloody Face but is somehow connected to the Hotel Cortez, where Lowe promptly lies down and takes a nap, not realizing that a goth Schmitt from New Girl is waking up as a vampire-thingie underneath that very bed. Oh yeah, Max Greenfield is in this too, sorry, I forgot to mention. He’s a junkie named Gabriel, who went to the hotel to shoot up drugs but ended up getting raped by a drill dildo on a latex-clad dude (is Ryan Murphy now ripping off the first season of his own show?), and appears to die after the junkie who shot up Donovan and let one of the German ladies lose from her cage shows up and demands that he say that he loves her. (And then demands that he say it “Like you mean it!” which must be hard as a note while you are colon is still getting drilled.) But I guess he’s a vampire now. NO TIME TO DISCUSS! NEXT POINT!

John Lowe is a man who Denis O’Hare’s drag queen (named Liz Taylor) correctly pegs as having lost something. It’s true. He quite literally lost his long-haired son on the Santa Monica Pier when he went to check some text message (probably from some skank, because this is nothing if not a morality tale). But surprise: his son is one of the Countess’ minions, which, unlike the movie, are not adorable yellow blobs who speak gibberish but Little Monsters who spend all day playing Tetris and eating candy and growing their hair out to Jolie-Pitt children length. Also, he’s married to Chloe Sevigny.

OKAY! I think that’s it for now…at least in terms of introducing us to the bazillion characters so far this season.

I actually have a bunch of overall critiques for this franchise, but as not to overwhelm you, I’m just going to parcel them out per week until I give up on this show again and just drop it. Sorry, American Horror Story: I can only give as much of a shit about watching a show as you guys do while making it.

Look, we all know my feelings about Scream Queens co-existing at the same time as AHS. But around season three, the Glee juggernaut influence became overwhelming. Suddenly, there WERE no bad guys, just differently-abled kids; outcasts from society. We were supposed to relate and root for the girls in Coven, which worked for that particular season. Less so for Freak Show, where the creators seemed less sure if they wanted us to be scared by–or FOR–their transient carny characters. And Hotel is already suffering that problem, as I noted with Bates’ character, by trying to make these characters who are supposed to be terrifying super accessible/explainable too soon.
This is the biggest sin of the AHS franchise, to be honest. It’s such a disappointment after its inaugural season where the big bad was revealed as Tate Langdon, the most beautifully emo character ever rendered on television. Evan Peter did a fantastic job with this character, making him both a sympathetic, if tearful Romeo AND a remorseless school shooter and serial ghost rapist. (Like he raped people AS a ghost, not a rapist who targeted ghosts.) Because right, that was what was so terrifying about him…he could contain both lover and antichrist at once, and just because he was evil didn’t make him any less angelic-looking or heartbreaking in his love for Violet.

Okay, that’s…that’s as far as I’m willing to dip my toe for this recap. Tune in next week, and maybe I will too! 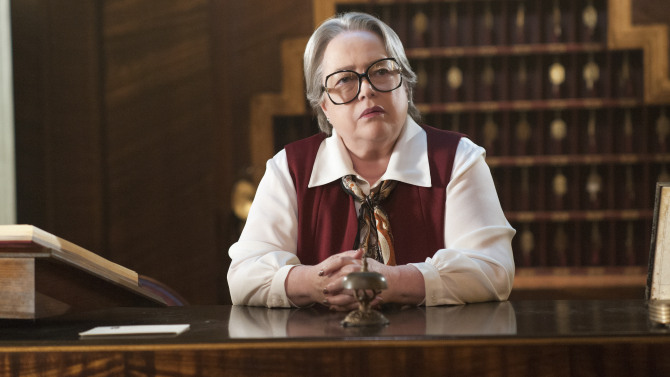