Ryan Murphy’s shows tend to get a lot of backlash, not despite but because they are so popular. Personally, I hate Scream Queens. Couldn’t stomach Glee after a couple seasons of the same old stale “Coach Sue makes fun of that milquetoast teacher’s hair” jokes. I’ve had my beef with the American Horror Story franchise before, or as I like to call it: American Minus the Flyover States, New York or Any Part of California That’s Not Los Angeles Horror Story. (Unfortunately, AMFSNYAPCTNLAHS isn’t hashtag material; although I might change all my passwords to it. You are welcome, hackers. /fsociety). When they showed the trailer for Murphy’s upcoming series American Crime Story: OJ Simpson during AHS, it became apparent that the similarities didn’t stop at the title: I literally thought I was watching another scene from AHS. That’s how much the trailer kept the visual style/tone of the show I was currently watching. The shows that make up Murphy’s oeuvre seems to embody some of the worst qualities of millennials (unsurprising, considering their target demo): laziness with a side of ADHD, a certain kind of aimless enthusiasm for conceptual ideas rather than any sort of work ethic, thoughtfulness or follow-through. It’s all homages and pastiches that border on copyright infringement, and the parts that are original–the dialogue, the juicy character roles for older actresses, the stylistic flourishes that elevate it from pure camp into a obsessive fandom-type sincerity–get lost in the groan-worthy messaging that Murphy throws on top with all the subtlety of a Chloe Sevigny anti-vaccination rant in the middle of a show about vampires (and ghost serial killers I GUESS).

All that being said, you’d probably think I hated Thursday night’s episode: it reeked of princely privilege. Oh, I guess Ryan Murphy can make his shows however long as he wants now? This episode was nearly two hours. No other episode has been that long. Even allowing that this limited series is a special little snowflake that doesn’t have to abide by traditional network standards, why not make the premiere the longest episode? Or the finale?

In reality though, I thought this was one of the best stand-alone episodes in AHS history. Ironically, when given an hour of TV to fill with this show, it can sometimes feel extra bloated with B-plots and ever-expanding expendable twink pool. No, I’m not talking about those demon children who live in the glass coffins at the bottom of the hotel’s actual (albeit drained) pool. I’m referring to the phenomenon known as Cheyenne Finn Wes Quinto Greenfield Bomer Patrick Harris Jr. Ryan Murphy’s go-to Frankenstein is either comprised of the world’s most interchangeable stand-in actors, OR, (and here’s my working theory) just one–possibly two– guys running a SAG scam. Evan Peters escapes this branding only because I have met and touched him, so I know he’s real. Also, he’s a better actor than all of them combined. YES I SAID IT. I love you, Tate Evan. Call me.

Paradoxically, when given almost TWO hours of airtime, the storylines actually coalesced into a somewhat cohesive narrative that made sense…well, as much as this show ever makes sense. Sure, there were still irksome parts: particularly Bentley’s Detective John Lowe storyline. I mean christ, at what point does an homage become straight-up stealing? Because that “serial killer who murders based on sins from the Bible AND whose creative expression of Lust involves a forcibly spiked dildo strapped onto a cheating husband who must then have sex with a lady who is not his wife, thereby killing her” seems a little too on the nose of a reference from David Fincher’s Se7en, where the exact same thing happened, and the killer was named John DOE. Also, the open question of whether this is a copycat killer or the guh-guh-guh-ghost of the original serial murderer is just a straight-up recycling of the Bloody Face Dilemma* of season 2. Ryan Murphy is plagiarizing himself, which is again as absurdly lazy as it is offensively grandiose. Sorry, AHS, you don’t exist in the same cultural canon as your source material this week: The Shining, The Thin Man (William Powell was the inspiration for Peters’ Gruesome Gatsby character, James March) Se7en, Only Lovers Left Alive and, with the introduction of Wittrock as a dumb-as-rocks male model, Zoolander. As Tristan Duffy, Wittrock is the same petulant, entitled idiot he was last season as Dandy; unfortunately, he’ll be sticking around now that he’s been turned vampire by the Countess (Lady Gaga, who cemented her coronation as Cher-apparent in a fabulous disco flashback). I mean, this is a guy who quits the modeling business by slicing his own face open backstage during a show. AS IF that scar wouldn’t just add to his appeal. Ugh, he suuuuucks.

On the plus side, in order to make room (service) in both the hotel and the narrative, this meant the Countess sent her last immortal boy toy packing. White Collar got swapped for White Rufio.

And so it goes.

Also: everything else that happened this week.

*The Dilemma being whether or not I will keep watching Asylum. 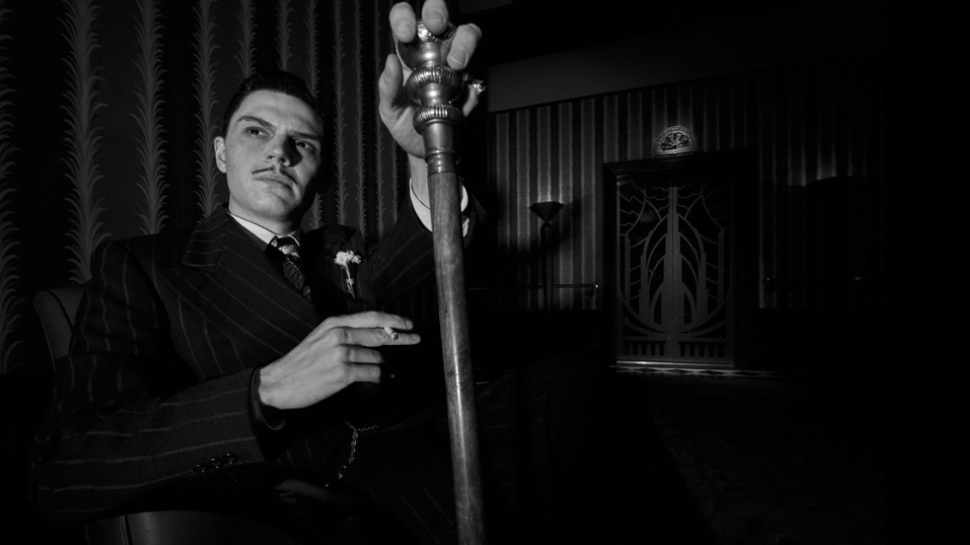