Gov. Andrew Cuomo today slammed claims by Mayor Bill de Blasio that New York City already pays enough into the Metropolitan Transportation Authority—and that it shouldn’t have to chip in the $3.2 billion for the MTA’s construction and maintenance budget that the state has requested—and claimed his fellow Democrat is not truly committed to efficient public transit.

Talking to radio host Brian Lehrer on WNYC, Mr. Cuomo mocked the mayor’s arguments that city residents pay for almost three-quarters of the MTA’s budget between taxes, fares, tolls and the $100 million stipend City Hall gives to the authority each year.

“If you want to count it that way, New York City uses it a hundred percent. Why are you only paying 75 percent?” he asked, laughing.

Mr. Lehrer noted the MTA in fact services most of the New York metropolitan area, with the Metro North trains reaching as far north as Poughkeepsie and the Long Island Railroad stretching all the way out to Montauk. The governor fired back by arguing that Albany is contributing $8 billion collected from across the state to the massive $32 billion capital plan, which will mostly finance expenditures within the five boroughs. His MTA Chairman Thomas Prendergast has asked the city to pay in an additional $3.2 billion.

“My point is, we’ve been procrastinating, procrastinating, the system is crumbling, it is the circulatory system for the entire metropolitan area. We have to step up and do a massive reconstruction program. This is the largest MTA capital budget in over 50 years, Brian. And the state will pay more money than it has ever paid in 50 years,” he said, noting that the plan will pay for roughly 1,000 new subway cars, 1,400 new buses and $1 billion in subway platform repairs and upgrades. “And my $8 billion, that comes from people in Buffalo and Rochester and Albany, and they want to help out New York City. But, you know, they’re from Buffalo and Rochester and not riding the subways that often.”

Mr. Cuomo asserted that the city possesses a $7 billion budget surplus, and could not claim it could not afford to pay more. He also claimed that the city was being asked to pay just 11 percent of the capital budget, which he alleged was consistent with what former Mayor Michael Bloomberg had sunk into the system.

“So you can’t cry poverty,” he said. “Mike Bloomberg invested in the MTA, and it was an investment that I think is going to go down in his legacy as one of the smartest moves he made as mayor. I think the same thing should happen for this mayor. We need to invest in our MTA system. It is our great asset. And, it is expensive. But again: largest capital plan in history, largest funding for the State of New York in history, but the city has to do its fair share.”

The governor slapped down a suggestion from Mr. Lehrer that both he and Mr. de Blasio want efficient and modern mass transit.

“We both don’t want to do it. You know how somebody wants to do it? They put their money where their mouth is,” Mr. Cuomo said, laughing again.

Mr. de Blasio’s administration disputed the governor’s figures, claiming Mr. Bloomberg had financed just seven percent of the MTA budget in the past. It also denied the city had any surplus, and highlighted that the mayor had honored a request from the MTA earlier this year that the city pay an additional $657 million into its budget.

The mayor’s office also reiterated Mr. de Blasio’s point that the Albany has in the past raided the MTA budget to finance projects outside of the five boroughs

“The people of New York City are doing their fair share to support mass transit,” de Blasio spokeswoman Amy Spitalnick said in a statement sent to the Observer, accusing the governor of dishonesty. “New Yorkers are tired of the bickering and politics. It’s past time for the State to get real: tell New Yorkers where your money is coming from; stop stealing money from the transit system; and ensure the people of NYC have a greater say how money is spent‎.”

The city finished fiscal year 2015, which ended in June, with a $3 billion budget surplus, according to State Comptroller Thomas DiNapoli. (The city argues that the money is not a surplus because it went “directly into programs and reserves.”) Mr. DiNapoli has projected a balanced budget for the city in fiscal 2016. It’s unclear where Mr. Cuomo obtained his figure of a $7 billion surplus for fiscal 2016. City Comptroller Scott Stringer reported in August that the city has been taking in more revenue—to the tune of $5.9 billion—over the last 12 months than expected, but if new expenses arise during the fiscal year that money may be spent.

This story has been updated to correct an editing error regarding Mr. Stringer’s figures, which focus on exceeded revenue projections, not an expected surplus. 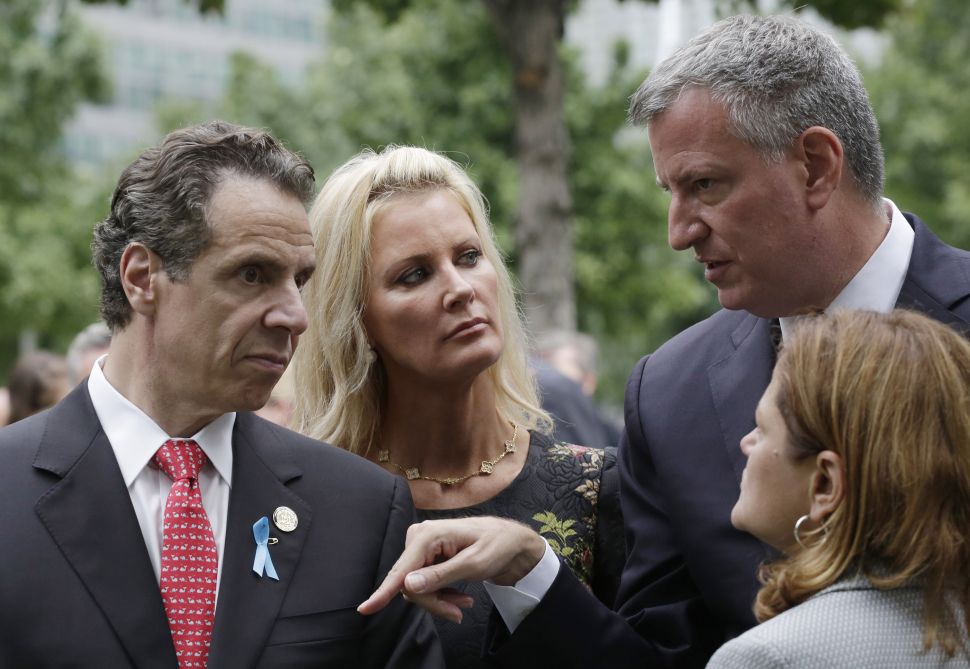