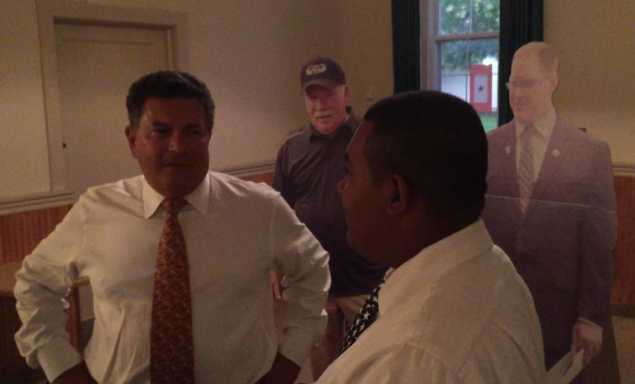 Fiocchi and Sauro at an town hall in July, with cardboard cut-outs of their Democratic opponents

Monday night will see the first district’s Assembly candidates face off in person for the first time in Cape May Courthouse. Democrats Bob Andrzejczak (D-1) and running mate Bruce Land have been notably silent during this year’s race, which experts are calling more consequential for Sweeney and state Democrats’ plan of attack in 2017 than for the district itself. The candidates are unlikely to debate again before election day.

In what the latest Stockton University poll deems a pick ’em contest, Andrzejczak and Land will face incumbent Sam Fiocchi (R-1) and Cumberland County Freeholder Jim Sauro. The Fiocchi-Sauro campaign has been steadfast in its criticism of the Democrats’ reliance on Senator Jeff Van Drew (D-1), and of their inaction when PAC-funded attack ads began airing against Fiocchi.

“Bob and Bruce – if their handlers allow them to – have the power to speak up and publicly denounce these kinds of smears,” said Fiocchi. “They have the ability to say they don’t want any more help from North Jersey special interests who are intent on destroying Atlantic City and further wrecking South Jersey’s economy.”

For their part, the Andrzejczak campaign denied keeping their candidates on a short leash.

“We stand in front of supermarkets, so I don’t know how much more public and unrehearsed you can be, because you have no idea what’s coming out of the door,” said campaign manager Allison Murphy.

The district’s dire need for decisive economic development plans is sure to dominate policy discussion. Expect to see the candidates struggle to differentiate themselves in their support for revenue-raising projects like the proposed construction of a new prison in Cumberland County, expansion of Route 55 to the shore, and the creation of new aquaculture facilities to mimic the success that Maryland and Virginia have seen with similar encouragement commercial seafood.

In a district that has seen Senator Van Drew rise on a center-right platform that Andrzejczak shares, any conflict between the self-described “Van Drew Team” and the Republicans is likely to center on the political stunts that have marked the race so far.

The General Majority PAC has been running attack ads throughout South Jersey criticizing Fiocchi for late tax payments, a charge that Fiocchi said could also be made of Van Drew. With the super PAC weighing in at a staggering  $2 million, Fiocchi and Sauro will have an opportunity to attack their opponents for leaning on independent spending in a local race.

Both sides are likely to reiterate their opposition to a resolution in favor of drivers’ licenses for undocumented immigrants. Fiocchi claimed that the largely Democratic Cumberland County freeholder board excluded from a public meeting at which he hoped to revisit the issue, with one of his aides photographing him standing outside the meeting. Freeholder Director Joe Derella said at the time that he was “appalled” by the stunt. Andrzejczak and Land could see an opening tonight to follow suit.

Though Sauro’s remarks on his radio show alleging that the Black Lives Matter constitute a “race war” have drawn attention, it is unlikely that the Democrats will try to use the controversy to their advantage.

On Sauro’s comments, Van Drew offered “That’s fine, that’s what having a radio show is about. Whatever Jim Sauro wants to do, he’s welcome to do.” Andrzejczak will be unlikely to stray from that stance.

“Given the fact that this is a split district, given that there is at least in my view a little bit of movement because of Christie’s lack of popularity down in SJ, I think that Democrats are seeing the first as an opportunity,” she said, noting that the ignominious flame-out of Republican candidate Anthony Cappola in the 38th has left the party and partisan PACs with only the first and second to focus their time and money on.

“I can’t remember it ever being represented by three Democrats. Traditionally, until Van Drew came along, it was a very strong Republican district,” she added.

Harrison went on to call the Democrats’ four-to-one fundraising totals against the Republican ticket a “part of Sweeney’s effort to make inroads in South Jersey in districts where yes, he’s known, but the districts themselves may not be accustomed to getting out the vote and the kind of hands-on treatment that they’re receiving now.”

The debate will be tonight at the old courthouse on Route 9 in Cape May Court House and starts at 7pm. 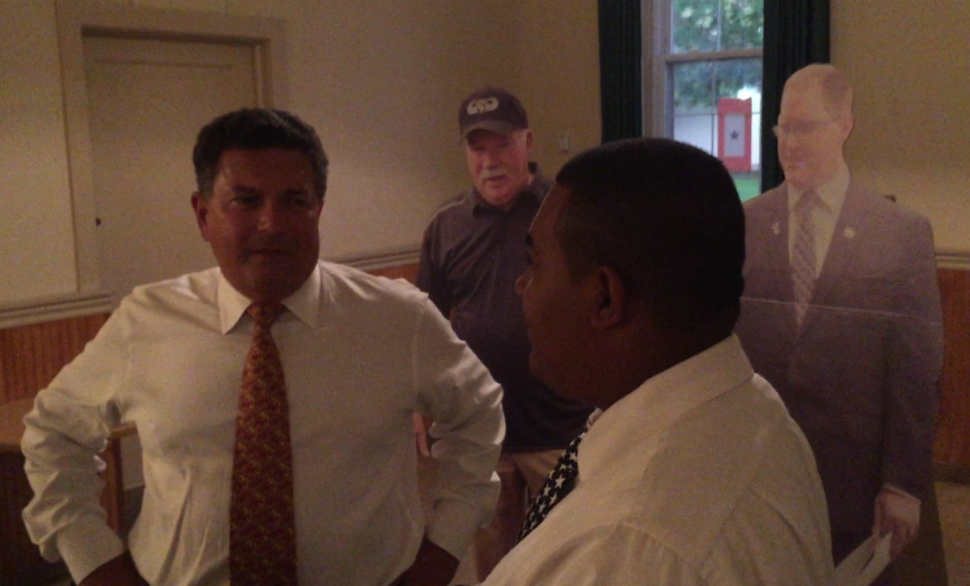