This year 267 galleries will exhibit at Art Basel Miami Beach, the biggest art fair on the North American calendar and one of the most important annual events of the art world. The fair, which will take place at the Miami Beach Convention Center December 3 through 6, is separated into several sectors including Kabinett, a space for galleries to present additional curated exhibitions alongside their regular booth presentations. Kabinett shows are both solo shows and group exhibitions and many highlight important historical artworks.

For 10th edition of Kabinett, there will be 27 curated exhibitions with a well-balanced mix of fresh work from Contemporary art stars like Glenn Kaino, Chris Ofili, Richard Pettibone, Joseph Kosuth and Nari Ward, and significant historical presentations of works by Chris Burden, Al Held and Agnès Varda.

Presentation highlights include Los Angeles-based sculptor Glenn Kaino, known for his elaborate, large-scale installations and participatory performance projects, for Chicago’s Kavi Gupta gallery. Fairgoers may remember A Shout Within a Storm, a series of precariously hanging metal arrows shown at The Armory Show 2015. For ABMB, the gallery will show Mr. Kaino’s The Internationale, an interactive installation and recreation of a 19th-century Pierrot and the moon automaton (traditionally a male doll that appears to sing and play the mandolin while seated at the edge of a faced moon). The work will be shown inside a darkened room, where the moon will sing and speak to visitors that enter.

Austria’s Galerie Krinzinger will show the work of late Los Angeles conceptual performance artist and sculptor Chris Burden, known for staging a shocking work in 1971 where he directed a friend to shoot him in the arm. Burden died in May from melanoma. A hand-painted binder featuring documentation and texts from the first three years of Mr. Burden’s boundary-pushing, sometimes dangerous performances will be shown in his Deluxe Photo Book 1971-73. Also featured will be a piece from his Bridge series, works on paper, and small sculptures.

Within the Edition sector (a section of the fair for prints and multiples) will be works by British painter Chris Ofili at New York’s Two Palms gallery. Mr. Ofili is perhaps best known for inciting public controversy when his painting The Holy Virgin Mary was shown at the Brooklyn Museum in 1999. His first solo U.S. museum show was held at the New Museum in 2014-2015. His series Black Shunga, a reference to the historic period of Japanese art of the Edo period, will be shown at ABMB. It includes 11 erotically-themed etchings on paper that has been infused with a dark blue metallic color-shifting material.

Below, a full list of Kabinett participants and exhibitions: 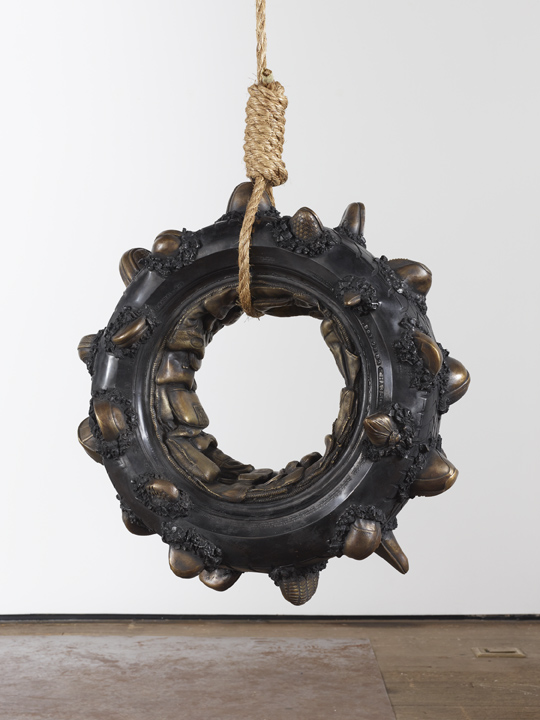