On Monday, Christie’s held a rare evening sale of photographs, the first event to kick off a week of auctions dedicated to the medium at four auction houses, and the results were far from stellar. The 42-lot sale ended the night with a total of $1 million, and only 24 lots, or 57 percent, sold.

Standout works from modernist and postwar masters like Man Ray, Diane Arbus, Alfred Stieglitz, Dorothea Lange and contemporary stars like Alec Soth and Todd Hido had been touted as highlights, but were often snubbed.

Could these results (and similarly soft ones for Contemporary art that we noted at Phillips in September) be a red flag for art-industry players?

The cover lot, Edward Steichen’s 1932 black and white shot Rockefeller Center (est. $225,000-$275,000), was also one of a few photos that, embarrassingly, passed in a row as auctioneer Philippe Garner tried ably to motivate the crowd.

A cover lot buying in is always a cringe-worthy moment. But exactly how weak is the market? It’s fascinating to note that the same Steichen print was offered at Christie’s 16 years ago this week (October 5, 1999) at a tiny fraction of the current price, or $30,000-$50,000 estimate. It was something of a disappointment then, too, bringing in only $32,500, including the auction house’s commission on top of the bid. So is the art market soft now because this artwork failed to appreciate seven-fold in 16 years?

Of the works at Christie’s that did sell, Karl Struss’ Man’s Construction went for above its high estimate (est. $90,000-$120,000) at $161,000, and was the top lot. The black and white image taken in 1912 is a fusion of Pictorialism, the late 19th century movement spearheaded by American photographer Alfred Stieglitz, which called for highly staged imagery modeled on the soft focus effects of Impressionism, and an early adoption of Modernist tropes such as geometric abstraction and attention to hard lines.

An untitled color photograph from Richard Misrach‘s On The Beach series, which was shown in the Art Institute of Chicago’s major traveling exhibition in 2007, was also in the sale’s top lots, and sold for $81,250.

One notable moment: Peter Hujar’s Candy Darling on Her Deathbed (1973), a portrait of the early transgender star who appeared in Andy Warhol films, did sell for twice its high estimate at $50,000.

Christie’s Photographs evening sale is bookended by an online-only sale that ran from September 22 through October 1, and a day sale taking place October 6.

Last fall, Christie’s similarly offered three sales, though they were all live auctions that took place on the same day (September 29, 2014) over three sessions. The results of those sales, which offered 262 lots total, was a 70 percent sell-through rate by lot, and a total of just over $6.1 million. 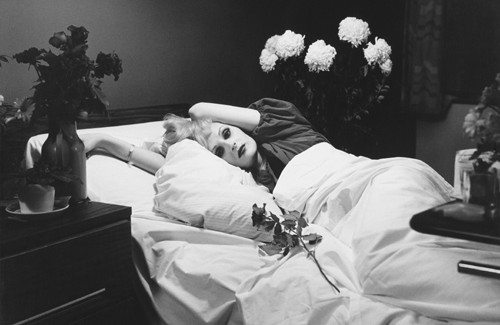