As Apple’s new operating system reignites a furor over ad-blocking — raising fears that news and other ad-supported media will become unsustainable and sparking a renewed debate over the ethics of ad-blocking — one can be assured that like forsythia in the spring, there will bloom much talk and hope of paywalls and micropayments coming to support the continued manufacture of content.

Sigh. For me, paywalls and micropayments are the moles that refuse to stay whacked.

Let me be quick to say that I’m not against paying for content. I will gladly sell you my books. I subscribe to The New York Times and now — thank you, Jeff Bezos — the discounted Washington Post. I spend a fortune on e-books and Audible books. I spend another fortune on cable TV — subsidizing scores of channels I never watch — and satellite radio (for Howard Stern). I buy movie tickets (for the popcorn mostly). Being an old fart who remembers the smell of LPs in Tower Records, I still buy albums more than streams. Each of these markets is challenged, but they and their consumer revenue will not go away.

Still, I have no — none, nada, zilch — faith that consumer pennies and dollars, however they are scrounged — via paywalls or micropayments or charity — will replace the billions advertisers have spent to support news. I say this not out of a lack of faith in my fellow news user but instead because of three fundamentals of media economics.

First is the impact of abundance on any market. When presses were expensive and few could afford to own them, newspaper proprietors held pricing power of their product, content. That, of course, is no more. Abundance leads the price of both content and advertising to fall toward zero. That is not good time to try to charge more when those around you are charging less — not unless you have something uniquely wonderful that can’t be copied.

Second is the pricing paradox of information. Because we in journalism fancy ourselves storytellers, we conflated our value with that of novelists, filmmakers, and TV producers. They can all sell their stories, why can’t wel? Well, they all sell a unique product: creativity. We don’t. The best of journalism is information rich, but information — once it is shared — is quickly commodified. In a free and modern society, no one can own information. I’ve long said that information doesn’t necessarily want to be free, but journalists want to free information.

And that leads to the third law: Competition drives prices down. The more competition, the lower prices will go. See law #1: We have endless competition. So even if 10 or 20 or 100 publishers banded together to erect a paywall around themselves, there will always — always — be a spoiler willing to sell the same information (see law #2) for less or nothing.

Well, then, how about The New York Times? you ask. The New York Times is the grand exception to all rules, I answer. It is worth paying for. My little local newspaper? Not so much. Yes, The Times has 1 million digital subscribers — but that’s less than a 2% conversion rate from its almost 60 million digital users. (And by the way, as the first head of Times Digital, Martin Nisenholtz, has pointed out, had The Times not offered its content for free online, it never would have attracted those 60 million prospects.) It’s also true that Gannett, America’s largest newspaper company, raked in $100 million from its paywalls, but then growth stalled — and they can’t even calculate how many potential new (that is, young) readers they may be losing. Paywalls are not our rescue.

So next comes the inevitable plea: How about micropayments? If people aren’t willing to subscribe, then surely they will be willing to pay some cents for an article. In the Netherlands, Blendle enables people to make small payments for articles. On Twitter, its founder, Alexander Klöpping, boasted that in his land of 16 million, 100,000 users had topped up their Blendle wallets. I asked for more telling metrics — how much has been paid out; how much has the average user spent — but he’s not disclosing. Blendle’s team is smart and branching out to other countries. I wish them luck. But I’m not going to pin my hope for the future of news on their model.

Not incidentally, such one-off payments for articles might seriously hurt subscription sales. As an experiment, when my subscription to a certain major financial publication lapsed, I tried to go without it. When I saw a link to it that interested me, I first checked to see whether someone else had already written the same story; most times, that hunt was successful. There were only a few occasions when I was left wanting to read that specific publication’s article. If per-article pricing were available, I’d be more likely to spend, say, $1 for the occasional article than hundreds of dollars for a subscription that — like cable TV — bundles access to more content than I want.

OK, then what about patronage? Listeners — in the single-digit percentages — are willing to support National Public Radio and its stations for the benefit of the rest of you freeloaders. On Kickstarter, some journalistic endeavors are getting funded. And a new model is emerging in Europe with crowdfunded and subscription-based news startups — Zetland in Denmark, De Correspondent in the Netherlands, Krautreporter in Germany, El Español in Spain, and Direkt36 in Hungary. I root for them all. I also support media organizations like the Guardian, Texas Tribune, MinnPost, and Voice of San Diego exploring membership to earn additional revenue. But in the end, there simply isn’t enough public generosity to support the journalism we need. Neither is there enough foundation money to pay for the journalism we require. That is why public radio also has advertising — er, I mean underwriting.

Without advertising and without sufficient consumer revenue, news dystopia awaits: fewer journalists, less reporting, less content — and that which remains goes behind walls where only the privileged can afford it.

Thus I believe we cannot afford to abandon advertising. As I wrote in these pages a few weeks ago, advertising need not irritate, intrude, lie, cheat, and generally suck. If we have the slightest hope of continuing to support news in anything close to the manner to which we have become accustomed, we must fix advertising. We in media must finally insist on quality from those who pay us — which means we must be brave enough to turn away paying advertisers when they try to feed our readers drek. We must help them make advertising relevant, useful, informative, and engaging (or at least two out of four). We must shift our business from volume — which is what leads to the crappy ads people want to block — to value.

How? More on that soon. 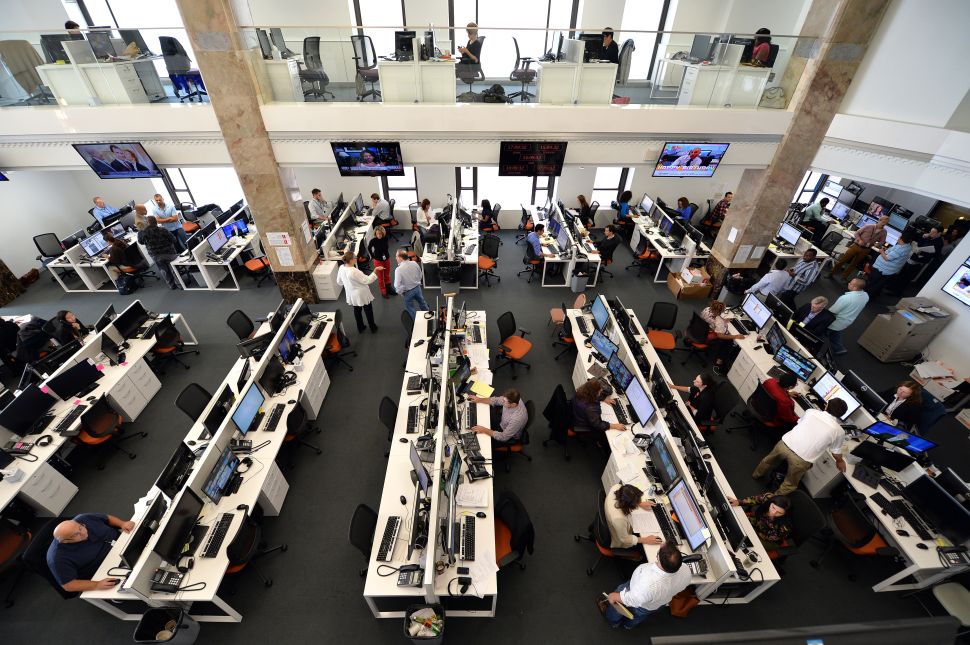