When the conversation turned to tax reduction and county debt—two of the hottest topics in the expensive Bergen County—things got tense between the candidates. Among those seeking the unexpired term, the debate’s central point of contention was centered around county finances.

According to Sullivan, making it easier for municipalities and to share services with the county by passing a resolution to reduce “red tape” could save both municipality money and county money.

According to Ortiz-Berger, however, the “taxpayers are sick and tired of paying high taxes” and, while Mitchell expresses the need for a resolution, it is not enough.

“Residents want towns to share services and we don’t leverage the power that the county has,” Ortiz-Berger said. “Mr. Sullivan said we could do a better job, when are you going to start doing it?”

For Libertarian candidate Rohrman, who is a veteran, the main issue creating debt and a high tax burden is the lack of privatization in Bergen County. He thinks that hospitals, schools and land parcels can be sold throughout Bergen in order to lower taxes and create a more competitive atmosphere.

Among the other candidates, tax reduction was an equally hot topic.

Mitchell, who used to be a freeholder and now is running to reclaim his seat, thinks that a “zero-base budgeting” plan where there is an annual review of the entire budget, not just add-ons to the already existing budget, is needed.

“No one gets an annual review,” Mitchell said. “The approach we have for budgeting right now is one, a little backwards and two, a little archaic.”

Tyburczy echoed his running mate on the need for zero-base budgeting, saying that millions of dollars could be saved if the system was put in place.

According to Tanelli: “Zero-base budgeting it a nice buzz word but where is there a substantial cut?”

For Ortiz-Berger, the lack of “running the county like a business” is causing the issue in Bergen County with debt.

Sullivan claimed that Ortiz-Berger and her running mates were failing to get a grasp on the fact the budget committee is chaired by Republican Freeholder John Felice. He says that the current criticism fails to recognize that the budget was approved by all freeholders, both Republican and Democrat.

When the conversation turned to the county’s pay-to-play law, Zur called out Mitchell for his answer that he would support it if elected.

“That is not how you voted when you were on the board,” she said.

“I would like to thank Freeholder Zur for those kind words,” Mitchell said.

Rich Siegel, the candidate for the Green Party, was unable to attend. He is also seeking the unexpired term. 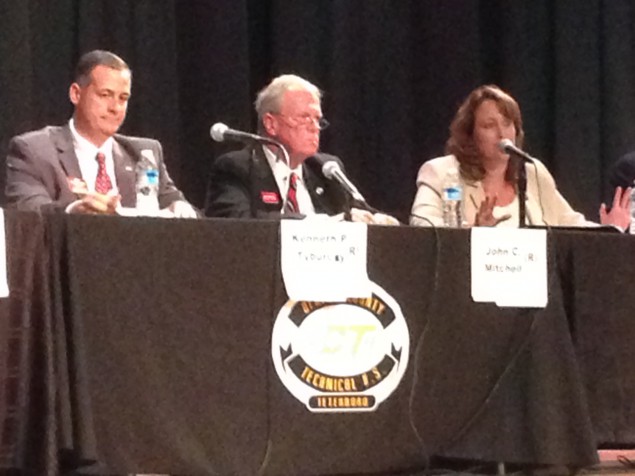