PARAMUS – At the Wednesday debate for LD38 assembly candidates, Republican candidate Anthony Cappola used his opening remarks as an opportunity to “address the 800 lb. gorilla in the room” and attempted to clear his name regarding the statements he made in his book, “Outrageous!”

“I chose to write that book and I take full responsibility for it,” Cappola said of the book containing hateful language against a number of groups including Jews and homosexuals. The book—which Cappola says is satire—caused a scramble among the Bergen Country Republican Organization to try to replace him on the ballot. The scramble led to the very temporary candidacy of Fernando Alonso before Republicans realized they could not fund a ballot change, leaving Cappola to defend his candidacy.

He continued: “I offended a lot of people. I offended my own mother with some of the things that I said. I have never been that person. I want to thank you for listening to me and giving me this opportunity.”

Despite that fodder, the debate was tame. Incumbent Democrats Joe Lagana and Tim Eustace played nice with Cappola, answering questions based on their records in office rather than waging attacks based on the charged content of Cappola’s book.

Throughout the debate, though there were some notable points of departure, the assemblymen and Cappola generally agreed on several issues including reforming the school funding formula in the state.

Cappola sat notably without a teammate throughout the forum. Though he is still bracketed with Mark DiPisa as a fellow Republican challenger to Eustace and Lagana, DiPisa declined to attend as to not “validate” Cappola.

Since DiPisa was not in attendance, moderator Dawn Clarke read a statement in his absence. In his statement, DiPisa railed on Eustace and Lagana for attending the event despite Cappola’s participation and claimed that they used LD38 taxpayers as an “ATM.” .

When asked about how taxes would be lowered in LD38 if he was elected, Cappola discussed how he believes that suburban districts like 38 disproportionately pay for schools outside of the district (similar remarks were included in DiPisa’s statement). Eustace agreed that changing the formula would completely alter the tax situation in LD38.

One of the topics where the candidates most diverged was on how the at-risk-of-default Transportation Trust Fund should be funded.

Eustace—who called himself “an environmental nut”—said that he feels that he and others who drive electric cars should pay their “fair share” and that he has introduced legislation to do so. Eustace said that the much-discussed gas tax should be a last alternative to fund the TTF.

“There are many alternatives we should look at before we raise a tax,” Eustace said. “The gas tax is a regressive tax.”

Like Eustace, Lagana agreed that a gas tax should be a last alternative. Unlike his running mate, however, Lagana offered a plan to ensure the gas tax would be properly used if it was eventually levied.

“If there is a gas tax it needs to be constitutionally dedicated to the transportation trust fund,” Lagana said. He also discussed looking at transportation agencies throughout the state to reduce the cost of construction per mile in the state.

For Cappola, a gas tax is out of the question in N.J. According to him, the TTF woes come from misspending the revenue that is already collected in the state and will not be fixed by a new tax.

“The good news is New Jersey has plenty of money,” Cappola said. “We don’t have a revenue problem, we have a spending problem. We have the money, we just have to reallocate where the money is and where the money goes.”

Another hot topic was the issue of Port Authority transparency. While all candidates agreed more transparency was necessary, Cappola differed from Eustace and Lagana who thought that the best way to push transparency in the agency was to work to override the veto of Governor Chris Christie on the current plan.

“The veto wasn’t overridden because they Republicans were told not to,” Lagana said. “The easiest thing to do is for Governor to sign legislation assembly and senate sent to him.”

Cappola, on the other hand, called for new laws and “new parameters” to ensure transparency.

Other topics discussed in the forum included the lack of pension funds in New Jersey, the use of renewable energy, how to incentivize businesses to stay in New Jersey/set up shop for the first time, women’s reproductive service funding and whether or not immigrants should be granted drivers licenses.

In closing, Cappola thanked the audience for giving him the opportunity to “clear the air.”

The forum was held at Paramus High School and Organized by the League of Women Voters. 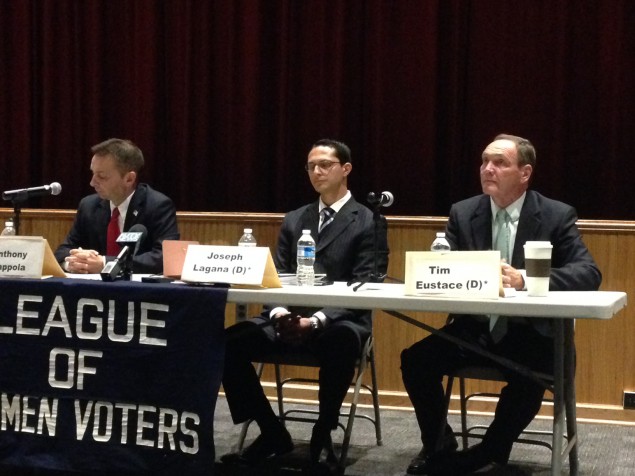