Sen. Bernie Sanders’ presidential campaign suffered a drop in the polls after the first Democratic presidential debate, during which Mr. Sanders actually presented his issues to the American Public rather than trying to cut down his main opponent, Hillary Clinton. Moderator Anderson Cooper gave Mr. Sanders a political alley-oop to criticize Ms. Clinton on her e-mail scandal and Mr. Sanders dismissed.

In the long term, Mr. Sanders’ decision will pay off, as he continues to prove to supporters he is a man of integrity over petty antics and corporate courtships. In the short term, the move helped Ms. Clinton look good in the wake of the bad press. Mr. Sanders allowed Ms. Clinton to rise above the smear campaigns driving down her poll ratings. He wants the election to be based on issues, not publicity.

On Saturday night, Mr. Sanders revamped the momentum of his campaign, highlighting the differences between himself and Ms. Clinton at the Iowa Jefferson-Jackson Dinner in a roughly 25-minute speech.

He showcased his record of voting on bills contrary to what was popular: against NAFTA, against the Iraq war, against the Defense of Marriage Act, and against the Keystone pipeline and Trans-Pacific Partnership.

At first, Mr. Sanders was in the minority in his opposition to these issues, but as new information came to light, popular consensus evolved. As such, Ms. Clinton—who voted for the Iraq War—changed her mind. Mr. Sanders had the good sense and judgment to know the reasons for going into war were largely fabricated, and he was one of the few to vote against it.

Ms. Clinton originally supported the Trans-Pacific Partnership, and only expressed opposition to the deal as its popularity waned. The same holds true for the Keystone Pipeline—Ms. Clinton refused to take a stance on the issue until recently, when popular opinion shifted in opposition to Keystone XL.

Ms. Clinton was in favor of the homophobic legislation, the Defense of Marriage Act, and defended the law—as a preventative measure for something worse—in an interview with Rachel Maddow last week.

“That’s not the case,” responded Mr. Sanders on Saturday night. “There was a small minority opposed to discriminating against our gay brothers and sisters. Not everybody held that position in 1996.” In 1996, the majority of Americans opposed same sex marriage, but today the consensus has shifted in favor of it.

Mr. Sanders also pointed out the contrast between himself and Ms. Clinton on the controversial Citizens United ruling.

“I am the only Democratic candidate for president who does not have a Super PAC and we are going to prove them wrong,” he said. Mr. Sanders has raised almost as much as Ms. Clinton from over one million individual donations averaging $30 each. Ms. Clinton has two Super Pacs, which have yielded one $2 million check, and six individual $1 million donations, among several other large contributions from wealthy donors.

His speech in Iowa highlights a major shift in the attitude of his campaign. Mr. Sanders had more pep in his stride and went beyond presenting his stances on issues such as wealth inequality, the costs of higher education, and climate change. He called out Ms. Clinton for her political expediency and lack of judgment on key issues–his record, in comparison Ms. Clinton’s, not only demonstrates he is more progressive, but also that his judgment is more accurate.

On Saturday night in Iowa, Mr. Sanders made it apparent that Democrats have the choice of nominating a politician driven by principle, or a celebrity who caters to whatever helps her popularity. 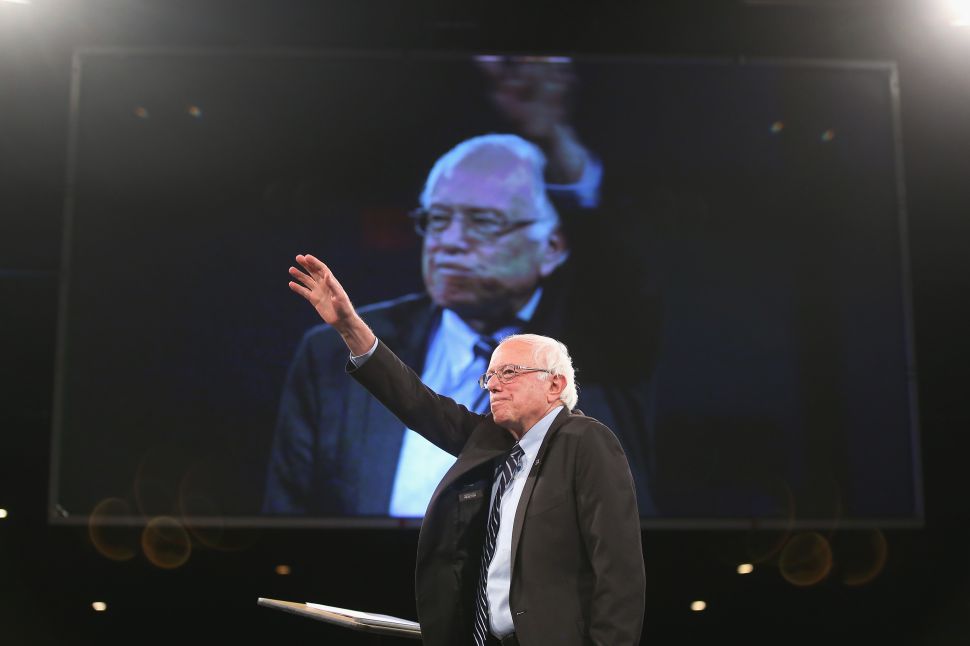