Mr. de Blasio, who renamed the Manhattan Municipal Building for Mr. Dinkins and unveiled a plaque for him at a ceremony beneath its ornate archway, once worked for the one-term mayor, who served at a time when crime and racial tensions roiled the city.

“History still won’t accurately identify what this mayor did for the city,” Mr. de Blasio, a Democrat like Mr. Dinkins, said. He argued it was “something we need to fix in our public discourse, it’s something we need to speak to as witnesses because when this mayor took office in 1990. This was not a safe city. It just wasn’t.”

“Someone had to make the change,” Mr. de Blasio continued, noting that Mr. Dinkins secured state funding for his “Safe Streets, Safe City” initiative, which boosted the headcount of the NYPD. “The only way to make the change was to do something very different and Mayor Dinkins went to Albany with a very challenging mission to achieve a fundamental change, to increase our police force, to match our challenge of the moment.”

Mr. de Blasio, speaking from a stage outside the Municipal Building as dozens of former Dinkins staffers and elected officials looked on, recounted how he volunteered for Mr. Dinkins’ 1989 campaign when “many people” thought it was “impossible” to elect a black mayor. Mr. de Blasio worked for him as a City Hall staffer and it was there, as he has mentioned many, many times, that he met his future wife Chirlane McCray, a Dinkins speechwriter.

“I didn’t need online dating,” Mr. de Blasio quipped. “I got to work in an administration full of wonderful people and one of them walked right up to me.”

Ms. McCray, at one point appearing to tear up, said she was proud to work in the Dinkins administration. “His legacy is a steady source of illumination, inspiration for Bill and me and the entire administration,” she said.

While murder rates fell under Mr. Dinkins and some public figures, including his old police commissioner Ray Kelly, believe he did not get proper credit for governing at a particularly difficult time in the city’s history, his brief tenure is also remembered for a series of disasters, including his slow response to the Crown Heights riots, where blacks and Jews clashed for several days. Portrayed as an incompetent, bumbling executive by some of the city’s newspapers, Mr. Dinkins lost his re-election bid to Republican Rudolph Giuliani, a current bête noire of the liberal Mr. de Blasio.

Unsurprisingly, Mr. Giuliani was never mentioned by name at the ceremony.

“This is a mayor who often felt the slings and arrows. Many, many of them quite unfair, I might add,” Mr .de Blasio said. “It was tough time. It was a tough time in terms of the tensions between communities. We needed to move forward.”

The Municipal Building was a home for Mr. Dinkins before he was elected mayor. As a city clerk and Manhattan borough president, he worked out of the soaring limestone building, completed in 1914 and designated a landmark in 1966. Many city agencies, including the comptroller and public advocate’s offices, are based there.

“I know that a child will be born today, maybe at Bellevue Hospital or Harlem Hospital, perhaps the baby daughter of a Mexican or Dominican immigrant and God-willing she will go on to become mayor of this great city,” Mr. Dinkins said. “She may ask, ‘Who was David Dinkins?’ And looking at this young, strong audience I’m counting on you to explain our shared history.” 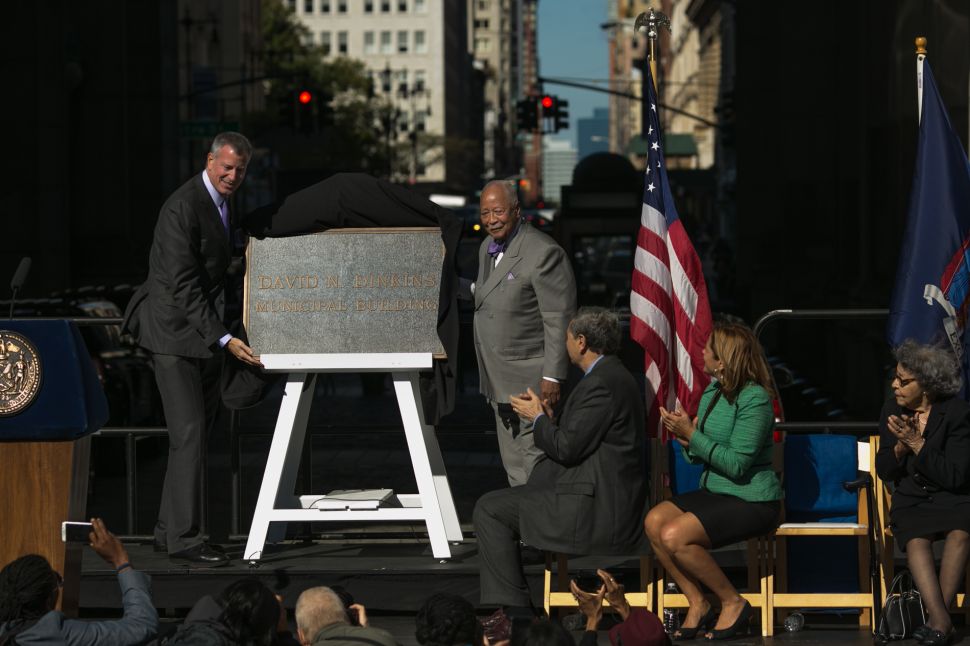