More voters disapprove of the job Mayor Bill de Blasio is doing than ever before, according to a new Quinnipiac University poll released this afternoon.

The poll found that 45 percent of voters give Mr. de Blasio, a Democrat, a thumbs up, while 46 percent disapprove of him. This compares to a 44-44 percent job approval in an August poll, when Mr. de Blasio was being hammered over the airwaves by Uber, the e-hail giant.

For the first time, Quinnipiac also surveyed Mr. de Blasio’s potential challengers in the 2017 primary and general elections. Mr. de Blasio, who is set to hold a kickoff fundraiser tonight, bested them all easily.

A startling racial divide for Mr. de Blasio persists. 71 percent of black voters approve of him, which is up from previous surveys, as do 51 percent of Hispanics. But 65 percent of white voters disapprove of his performance. Voters say 48-42 percent that the mayor does not deserve re-election.

“While polls go up and polls go down, the mayor remains focused on keeping NYC the safest big city in America, adding over 65,000 pre-K seats, creating more affordable housing than in decades, the first ever rent freeze, the lowest unemployment rate since the recession, and making New York a fairer city for its millions of residents,” said Peter Kadushin, a spokesman for Mr. de Blasio.

There are signs of strength for Mr. de Blasio in the poll, particularly as he prepares to seek re-election. His approval rating is 61-30 percent among Democratic voters and primaries in New York are restricted to registered Democrats. Republicans, who are far outnumbered, disapprove of Mr. de Blasio 81-14 percent.

In Quinnipiac’s poll of the primary field, Mr. de Blasio gets 41 percent, with 13 percent for Comptroller Scott Stringer, 7 percent for Congressman Hakeem Jeffries of Brooklyn and 4 percent for Council Speaker Melissa Mark-Viverito, who has all but ruled out herself for a 2017 bid. Two other rumored candidates, Bronx Borough President Ruben Diaz Jr. and Public Advocate Letitia James, were left off the poll.

In a general election match-up, de Blasio gets 48 percent against former NYPD Commissioner Ray Kelly, a rumored 2013 candidate for mayor who never ran and has not indicated he would run again, and Michel Faulkner, a reverend and former NFL player. Mr. Kelly and Mr. Faulkner got 28 percent and 6 percent respectively, with 13 percent undecided. 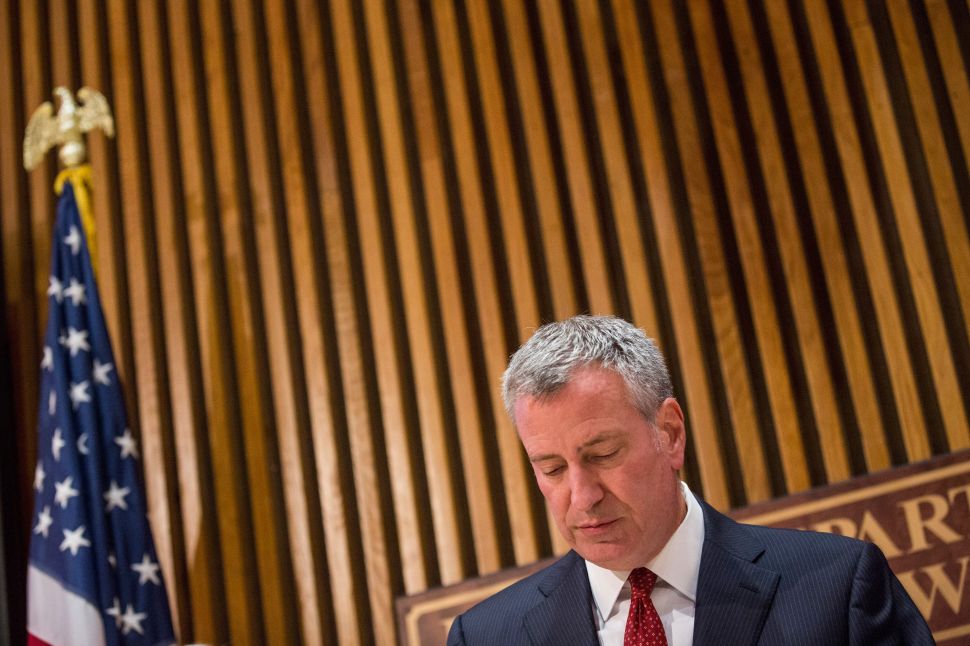