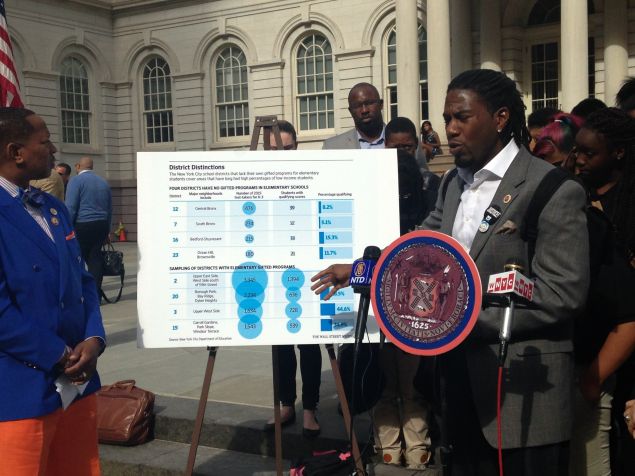 The Council’s Black, Latino and Asian Caucus today called on parents in their districts to apply to have their kids take the city’s gifted and talented exams by the November 9 deadline—and demanded the city open more programs for academically advanced students in low-income minority areas.

The politicians gathered outside City Hall touting statistics illustrating that children in predominantly black and Hispanic districts take the entrance exam for the city’s school system’s gifted and talented programs at a far lower rate than children in mostly white districts, that the percentage of African-Americans and Latinos in such programs has dropped five percent in the past three years. This, they argued, was part of a self-sustaining cycle that has left four majority-minority school districts without any local gifted programs—which discourages students and parents from applying to take the test, which discourages the city from investing in starting such programs.

For BLAC chairman Councilman Andy King of the Bronx, forcing children to travel to take part in gifted and talented programs recalled slavery.

“The sad thing is, this kind of reminds me of reading those history books, or if you watch the movie ‘Roots,’ they picked the best and the brightest buck to go out and do the work. And what they’re doing is picking the best and the brightest out of our neighborhoods and taking them out to do something else,” he said. “I think all our children are gifted the minute they’re born and they’re talented the minute they smile.”

“I just want to make it clear: gentrification exists, and gentrification exists in our educational system. That is the reason why in certain neighborhoods we have gifted and talented programs, and we have a bunch of them. And in other districts we have none or just one,” argued Manhattan Councilwoman Rosie Mendez, co-chairwoman of BLAC. “Department of Education, you have a responsibility, irrespective of parents register or not, those gifted and talented kids are in every school. And we should have those programs in each one of our schools, in each one of our zip codes, irrespective of what community you live in, and irrespective of how many people, what the colors of their skins are like.”

Mr. King said that the Department of Education canceled a scheduled appearance before BLAC today fearing an “ambush.” Brooklyn Councilman Robert Cornegy, who initiated the push in the caucus for equity of access to gifted and talented programs, said he had spoken in the past with Ms. Fariña about the issue and received no definitive answer.

“Her response at that time to me was that she wanted all schools to be gifted and talented. And ultimately, that’s what we all want. But right now what we want is to close the disparity gap, right now, right here today,” he said.

The city Department of Education pointed out that the four districts without a gifted and talented program had only a scarce handful who took the test and qualified, and that they were given equal priority to enter an accelerated study course in a neighboring district. It also highlighted that its efforts to reach out to parents through postcard and the universal pre-Kindergarted program to remind them about the exam.

“Every student deserves a fair shot at gifted and talented programs, and we have worked to increase the number of test takers in areas with low participation rates,” said spokesman Harry Hartfield. 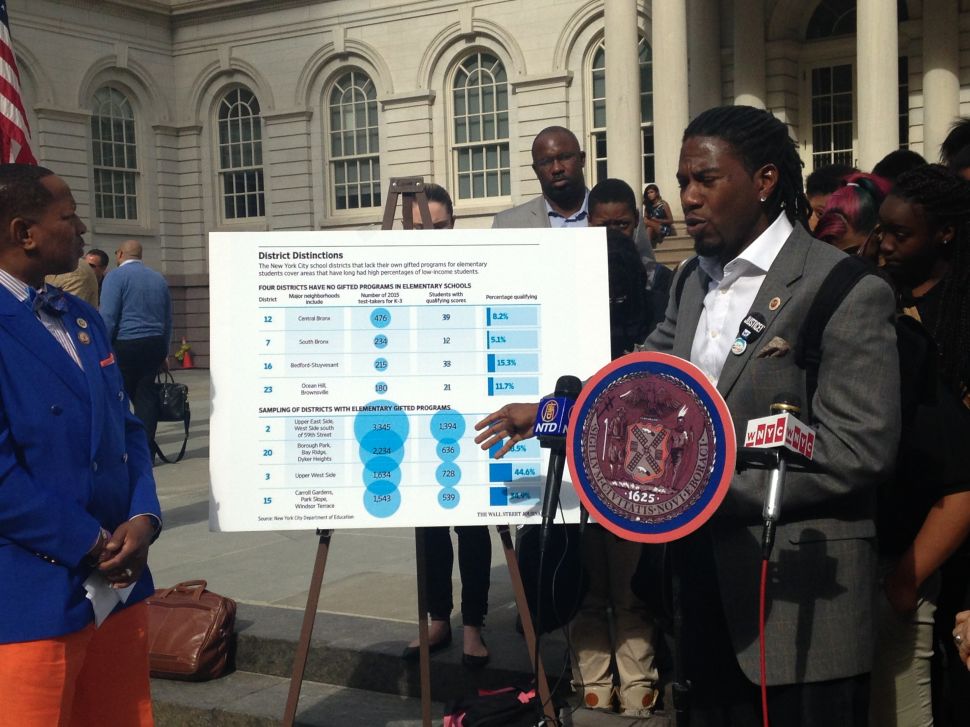