Bone Tomahawk, by novelist-turned-director S. Craig Zahler, is a bleak but stylish curiosity—the kind of existentialist Old West thriller you might expect from a Quentin Tarantino, but not from a first-time filmmaker hopeful for the kind of box-office success that could lead to future financing. It begins with two corpse robbers slashing a human throat, replete with the sound of blood gushing like a brook, a discussion of the veins in the neck that must be severed to do the job properly, and one of the killers complaining, “Why do they always wet themselves?” It’s that kind of movie.

The plot is simple: a tribe of American Indians is terrorizing the frontier town of Bright Hope. Most of the women and children have fled, leaving the menfolk to hang out at the local saloon called the Learned Goat, where the bartender greets customers with “What’s your predilection, mister? You look like you could use something potent—or omnipotent.” When the American Indian cave-dwellers kidnap some of the local settlers, including Samantha O’Dwyer, the lady doctor (Lili Simmons), Sheriff Franklin Hunt (Kurt Russell wearing a badge is always a welcome sight) organizes a small posse to rescue them from the flesh-eating tribe of maniacs called the Troglodytes. As the understaffed posse heads off into the sunset, the sheriff orders the deputy he leaves behind to send a message to the cavalry. The deputy turns to the folks in the Learned Goat and asks, “Does anybody know how to spell ‘Troglodyte’?” You laugh nervously, knowing gore is on its way.

The brave but foolish four-man rescue mission includes John Brooder, a handsome gunslinger wearing the latest New York fashions replete with matching hats (Matthew Fox, from the TV series Lost), the sheriff’s aging deputy named Chicory (Richard Jenkins) and cowboy Arthur O’Dwyer (Patrick Wilson), the lady doctor’s husband with a broken leg who writes poetry. On their first night in the wilderness, their horses are stolen and they are forced to continue on foot—an especially arduous task for Mr. O’Dwyer and his crutch. One false step and he faces amputation. The rest of the movie follows them on their journey to find the cave, piling up as many dead bodies on the way as the traffic allows. It’s an uneasy mixture of bizarre character development, arty dialogue laced with black humor and gruesome horror flick.

Novelist Zahler specializes in fanciful dialogue that doesn’t work as well on film as it does on paper. Saloon customer annoyed by sheriff’s line of interrogation: “You been squirting lemon juice in my eye since I came in here.” O’Dwyer to ladykiller gunslinger, who once had designs on Mrs. O’Dwyer: “Make any flirtatious remarks in my wife’s presence and there’ll be a reckoning!” Instead of “Shut up!” the gunslinger retorts: “Would it be possible to close that aperture?” After he riddles a pair of approaching drifters without provocation, one of the macho men around the campfire says, “You just educated two Mexicans on the subject of manifest destiny.” Most of the time, you don’t know whether to cringe or laugh out loud.

So you wait for the final bloody showdown inside the cave, where a handsome deputy is stripped naked, his legs are spread wide apart and he’s sliced in half right before your eyes. The violence is intense, and at two hours and 12 minutes the movie is too long and the pace too leisurely to sustain it, but I wasn’t bored. When in doubt, bring on the Troglodytes. 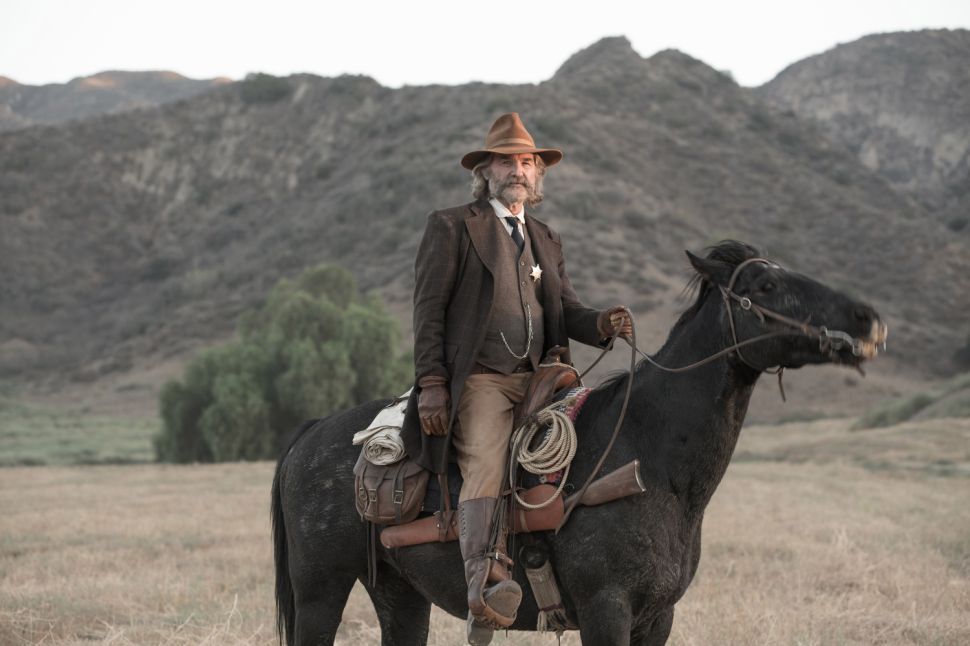