The gathering on the steps of City Hall followed a thousands-strong demonstration in Brooklyn and a march over the Brooklyn Bridge. Organized by longtime pro-charter, anti-de Blasio group Families for Excellent Schools, the rally gleefully plundered the rhetoric of the mayor’s 2013 campaign—with children and parents outfitted in T-shirts reading “I fight to end inequality” and slogans bemoaning the “tale of two school systems.”

“Charter schools are here to stay,” Mr. Diaz, viewed as a potential successor and even challenger to Mr. de Blasio, said to applause. “How can we be against this? How can we not, how can we deny the families and the children those possibilities? How can we deny them that equality? Mr. Mayor, in a nutshell, what we are saying here today is this: that the public school system is your system. Charter schools are part of that system. And all we want from you, Mr. Mayor, is to treat them equitably.”

Mr. de Blasio, a steadfast ally of teachers unions, advocated on the campaign trail for charging charters—which often pay administrators like Ms. Moskowitz salaries far exceeding their public school counterparts—rent for the use of public school space, and supported curtailing the further expansion of the privately-run learning institutions. Gov. Andrew Cuomo, a close ally of both Success Academy founder Eva Moskowitz and of Mr. Diaz, blocked the former proposal in the 2014 budget and even created new provisions obligating the city to pay when charters have to use private space.

The mayor has since toned down his rhetoric on charters, and at the recent roll out of his new education plan called for a sharing of best practices between the two types of schools, which the borough president praised as a “conciliatory” move. He called the mayor’s “Equity and Excellence” plan—which calls for universal second grade literacy, access to computer science courses at all grade levels and AP classes in all high schools—”a good beginning.”

But he argued for more investment in sports, gifted and talented programs and vocational education—and for the mayor’s Department of Education to identify where the new Success Academies would go.

“What this rally is about is the anxiety and the concern levels of the charter school parents of those charter schools that already have their permits, have their charters and unfortunately don’t have the locations identified. And it raises an anxiety. And we’re here saying, we want to work with the mayor,” Mr. Diaz said.

Asked if he agreed with FES’s allegations that the de Blasio administration was dragging its feet on finding locations for charter schools in existing public school buildings, Mr. Diaz answered, “I hope not.”

Advocates of traditional schools have long seen charters as a backdoor scheme to privatize the school system and weaken the political influence of organized labor, and have pointed to the large donations Success Academy and other charter chains have gotten from bankers and hedge fund managers as proof. Mr. Diaz, however, dismissed such claims as “vitriol” and argued that the contributions from the financial sector are vital to making the charter system work and produce test results that are often higher than those achieved in public schools.

“A lot of folks, they say ‘well, charter schools, they are a system that is financed by the rich folks.’ Look, when I go and visit the charter schools in my borough, I don’t see any of those kids who are kids from people on Wall Street,” he told reporters. “And the people on Wall Street who are millionaires, if they want to invest for better educational outcomes and results in my borough, I think that’s a good thing.”

Mr. de Blasio’s administration responded to the rally by saying it had been in constant contact with Success Academy about finding locations, and would site them well in advance of the start of the next school year. It also seemed to point out that only a small fraction of the city’s public school students attend charter schools, and said its main focus was on improving opportunities for all children.

“Mayor de Blasio is focused on ensuring that every child, in every classroom, has a future that isn’t limited by their ZIP code,” said spokesman Wiley Norvell, highlighting both the Equity and Excellence initiatives and the administration’s flagship universal pre-kindergarten program. “We believe that’s the path to raising achievement—not just for some students—but for all students.” 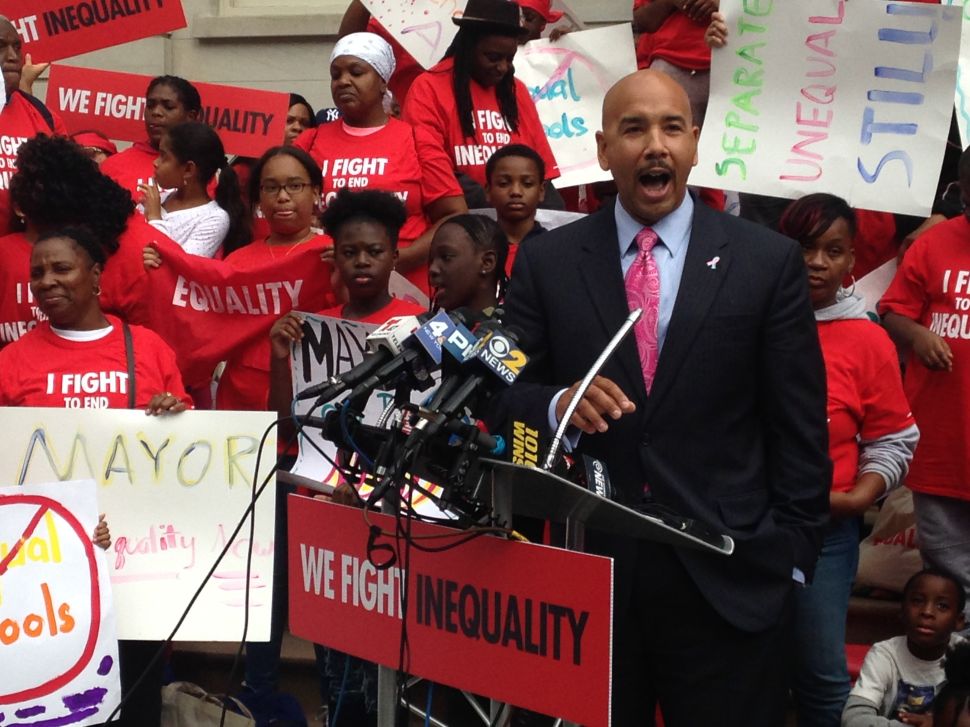