Assembly Speaker Carl Heastie took time after his whirlwind tour of upstate New York to talk to me on the phone about the changes in Albany this past year, which saw him replace scandal-scarred former Speaker Sheldon Silver, and the challenges he foresees going forward. For a man whose job title implies loquaciousness, the Bronx legislator—now in his seventh term in the capital—is known for his taciturn style. But he opened up to the Observer about the people he admires, his relationships with his colleagues in government and his hopes for next year.

Who are your political idols?

Chuck Schumer is one. I like how everything is always retail to him, even though he’s a U.S. senator. You know, getting to local events is still very important to him, so I’ve always tried to kind of do the same thing.

He kind of describes how all politics is local. As in, even though, being speaker, and I was trying to get around the state, and I still would try on the weekends to get to as many events in my district as I possibly could, because, as I mentioned, all politics is local. And he still, you know, subscribes to that. Even though he’s a U.S. Senator and, hopefully, he becomes the next majority leader of the U.S. Senate.

“This is a big state, it’s a diverse state, but there are a lot of things that, you know, seem to be similar needs throughout the state.”

You mentioned your tour of the state, which involved visiting areas you had never been. What are some things that you’ve learned in your travels?

I don’t know if I actually learned anything, I just, I think I saw things, and they put a visual to a lot of things. But, what I did find is that this is a big state, it’s a diverse state, but there are a lot of things that, you know, seem to be similar needs, throughout the state. You know, visiting the upstate cities, they have some of the same issues: transportation, poverty, needing jobs, things like that. So I found a lot of similarities. So, I don’t think I learned anything new that was earth-shattering to me, it just kind of gave me a visual of what these different communities are going through in the state.

And how has that impacted the agenda you’re going to bring to Albany next year?

Which of those issues is most important to you, and which do you think will be the greatest challenge to get past the Republican State Senate?

What’s your strategy for getting the State Senate to agree to initiatives like the minimum wage and the DREAM Act?

For minimum wage, minimum wage is something that polls very well even in Republican districts. And hopefully with this being an election year, you know, the Republicans won’t want this to be used against them in an election cycle. Let’s hope that that happens. But always, always the art of compromise, it’s always the Assembly, the Senate, the governor tripod, and at some point all three legs will come to some agreement.

How do you see your style as being different from that of Mr. Silver?

I would say, I know that there was this perception that, you know, Shelly was heavy-handed or didn’t listen. I didn’t really find that to be true. But I have gone out of my way to let all 100-plus members of our conference have an equal say in what we do. I feel that people have expertise even if they were just elected in the last cycle. So that has caused us to have longer conferences, but I think when you discuss issues a lot, the best path, the best course to take, always rises to the top.

“I’d say I have a tremendous relationship with the mayor right now.”

How do you think your relationship with the mayor is different than the previous speaker’s?

You have this public image, not unlike Mr. Silver, of being reserved and aloof.

I don’t know if I agree with the word “aloof.” I agree “reserved” is probably a better term. I like to listen, and in discussions I like to hear people out. I don’t always speak a lot, even when I was a member, I wasn’t always one who spoke on every subject. But I don’t think I’m aloof at all. But the members have an open line of communication with me, and we speak often. We will exchange conversations by telephone, by text. I think the members here have more communication with me than they ever had before.

Members contact me directly with their concerns, and we go forward from there. I’ve always operated like that, I like to have people feel that I’m reachable. And that’s how I am with my constituents. People don’t have to make appointments to come see me. They can come in and get answers, that’s it.

When do you think you first knew you wanted to be speaker of the Assembly? And how did it feel when it happened in January?

You know, I don’t know. You know, I guess it’s like asking Barack Obama when he wanted to be president of the United States. It’s not as though I was sitting in the Assembly, you know, looking how to become. I guess the start was the things that I tried to do, and then kind of when the opportunity presented itself, I put myself forward. But I wasn’t looking at ways to try to make myself speaker. Notwithstanding, you know, what Shelly’s going through, I had a good relationship with him and I was fine with him being the speaker. So I wasn’t looking on how to try to get it done. But when the opportunity came, I felt I was just as good as anybody else who put themselves forward.

It was a little humbling. You know, sometimes you say to yourself, you know, “did you, do you really want this, do you really want to put yourself through this?” But a lot of times later on, after we did the budget and in different places, those questions get answered to you, why you do these things and why you put yourself in that position. And I can give you the perfect answer, probably the thing that has meant the most to me that answered that question for me. When we were doing the tour, at the University of Albany, this young man, who actually I saw when we went to Cuba [on tour with other state leaders], he was a SUNY Albany student who was studying abroad in Cuba, he handed me a bag with a bunch of thank you cards in it. And it was thank you cards from the additional students that SUNY Albany was able to accommodate by increasing the amount of money we put into the Educational Opportunity Program. So this type of thing reminds you why you put yourself in this position: to lead on things that benefit the people of the state of New York.

“In this business, I think paranoia is probably a good thing.”

I’ve seen you say at different events that criminal justice reform is the major issue you want to accomplish, and that your speakership would be “in vain” if it doesn’t get done. What is the biggest way you think that New York State can keep people of color out of its prison system?

Well, that might be a 15 part answer. It’s proven that education, dealing with poverty, you know dealing with discrimination, dealing with people’s ability to be heard in the criminal justice system, all of those things I think would matter in trying to stop this pipeline of people of color going to prison. We still spend more per person in prison than we would trying to educate people. So I think that we still have a challenge. And we look at all the things people go through, why they end up going down the path that puts them in the hands of the criminal justice system, to me, we as government need to attack that. Are we going to stop everybody from committing crimes? No. But I think we do have to do a better job of providing opportunities, so that people don’t look at issues of crime as a way out.

A lot of what goes on in the household for a child or a teenager can have a lot to do with what they do once they go outside those doors. Will they go to school? Whether they interact with other people. One of the reasons why young people join gangs is because their missing some of the stuff they should be getting in their household. You know, people go to gangs because they feel its inclusiveness, they feel it’s a family environment to them. So I feel if we start to improve the places where kids are actually laying their heads at night, we can try to do other things that prevent them from making wrong decisions.

It was a big year in Albany. Mr. Silver got arrested on corruption charges, as did former State Senate Majority Leader Dean Skelos. What do you think the mood is like going into the next legislative session? Some have described an atmosphere of paranoia as budget negotiations wrapped up last year.

I think people still go to Albany knowing that there’s a job to do. These are issues that are on people’s minds, but I think in the end, even with what happened with Shelly Silver and with Dean Skelos, the world still has to go on. There are still 19 million people who have to have legislators and representatives do what’s in their best interests. So I think people, it’s out there, but I think people are mature enough to know we still have a job to do. 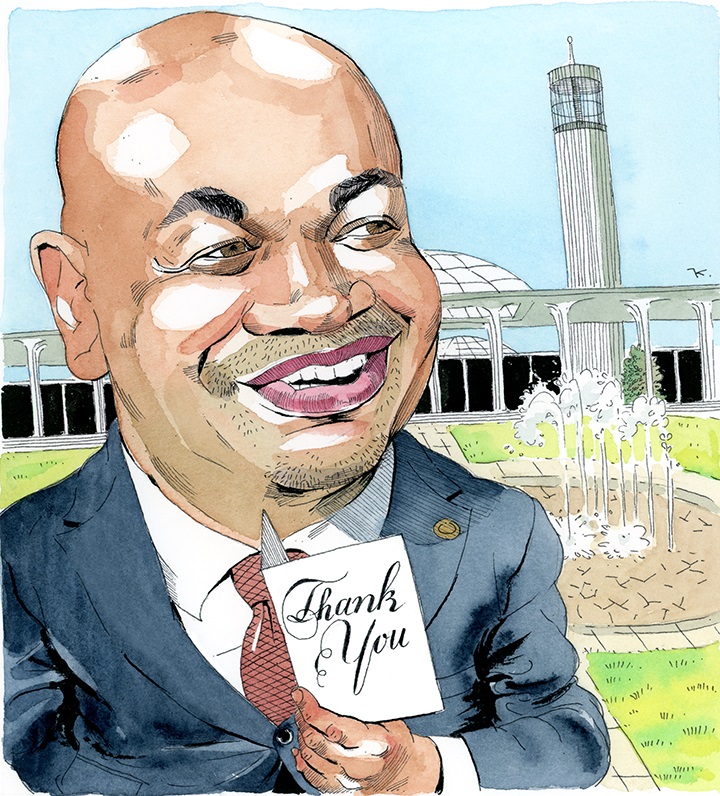