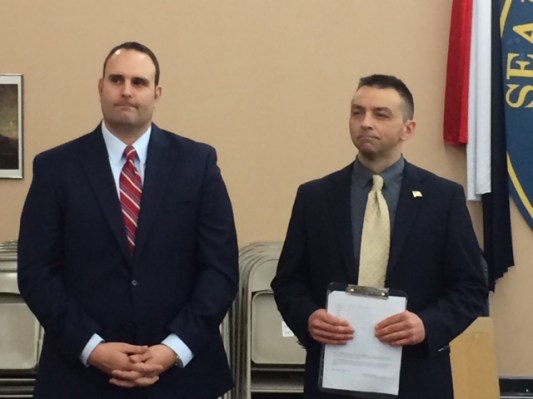 (Left to right) DiPisa and Cappola

Republican state Assembly candidate Anthony Cappola dropped out of the race Thursday afternoon after prodding from his running mate Mark DiPisa, and from various members of the Bergen County Republican party. Sources claim that state-level Republicans also had a say in persuading Cappola to drop out.

The announcement comes after a book written by Cappola came to light, revealing inflammatory statements that could be interpreted as anti-semitic. The move will mean serious trouble for Republicans’ challenge to incumbent Democrats Joe Lagana and Tim Eustace.

The book, a hash of exclamation points and far-right ravings that was rejected by at least one vanity publisher, includes passages in which Cappola calls for “one big ass no holds bar war” between Jews and Palestinians.

“P.S. I really don’t care who wins over there, just someone please win. And keep the other guy down so much, that they cannot revolt, that’s peace!!!!”

Other highlights include Cappola’s thoughts on immigrants, gays and women.

“HELLOOOOO!!!!!!!!!!! You live in A M E R I C A!!!!!!!!” Cappola wrote. “Write and try your dam best to learn and USE ENGLISH!!!!! If your not going to advertise your business by putting your store signs in ENGLISH, than giving the American people, (including yourselves, because many of you are AMERICAN.) a slap in the face with that foreign writing bull!!!!”

One passage recommended sterilization for welfare recipients, such as “some 18 year old whore!! Who has 7 kids, is healthy, can work, but just can’t keep her legs shut.”

“That’s why people can’t stand fags, it’s not because they’re homosexual, but because they have telegraph it just incase you didn’t know they were homos!!!!!! … And NO, I am not HOMOPHOBIC. The only person I fear is GOD, and that’s the truth!! And I don’t hate homos, I understand that they have a problem and can choose to get help if they want”

DiPisa and Cappola both released statements on the decision.

“I feel betrayed and denounce the offensive garbage he sold to the public,” said DiPisa. “As soon as I heard what was written in this book, I picked up the phone and told him to drop out immediately.  I made it clear to him that if he didn’t drop out of the race, I would. I refuse to associate myself with someone who would promote hate, intolerance and bigotry. I got in the race because I’m worried about the future of New Jersey and I won’t let this deter me from focusing my attention on fixing the state.”

“I’m sorry if I offended anyone and deeply regret what was written. I am not the same person I was twelve years ago, but I take responsibility for what I wrote and have chosen to bow out of the race,” said Cappola.

The two were the GOP’s best chance of running candidates who had no connection to former Bergen County Executive Kathleen Donovan. Now that the party is past the deadline for replacing him, Cappola’s exit will mean that Republicans in the district will have to limp through this cycle with half a ticket.