As the third Republican primary debate approaches tonight, Assemblyman Michael Patrick Carroll (R-25)—a movement conservative from Morris County—has weighed in on the still-crowded field. Though he has yet to officially endorse a candidate in the 2016 presidential race, he thinks that the field is starting to “narrow itself down.”

“In all honesty the one I liked most at the outset was Scott Walker but he went absolutely nowhere,” said Carroll of Walker who dropped out of the race last month due to campaign woes. “He was boring, they said. I think boring is good in a presidency. We have had seven years of excitement [with President Barack Obama] and look where that has gotten us.”

According to Carroll, the debates so far have “not had as much intellectual heft” as he would like and have been “a lot of spectacle.” That is partially due to the inclusion of what he called “flavor of the day” candidates like Donald Trump and Ben Carson.

“After Trump and Carson stop being the flavor of the day, and I think they will, I think the party will get down to trying to choose an experienced candidate,” Carroll said. “I think it will be somebody like [Ted] Cruz or Chris [Christie], a governor or a senator.” He also said he believed Marco Rubio was a solid candidate but that his lack of experience may make him unprepared to hold the presidency.

Carroll did say, however, that no matter which Republican hopeful eventually wins the nomination, that person would be a better pick than either of the likely Democratic choice of Former Secretary of State Hillary Clinton or her main opponent Senator Bernie Sanders.

“In all honesty I have spent more time looking at Bernie Sanders and Hillary Clinton than my own field because the thought of either one of them as president scares the pants off me,” Carroll said.

While he said that he is not yet prepared to pick a candidate to endorse, Carroll claims he will fully support whoever the eventual nominee is, even if that person turns out to be someone with little political background like Trump or Carson.

“I think that if I was speaking to my party I would say to them: Stop looking for a reason to oppose any candidate,” he said. “You might say ‘I disagree with Trump on X, Y, Z.’ But what about A, B, C, D, E?”

When asked if he thought Governor Chris Christie—who the majority of the Republican establishment in New Jersey is backing—will be able to rebound after recent polls have placed him at one percent in Iowa, Carroll said that it was too early to tell.

“Who knows? I think that last time we had [Mike] Huckabee one week and then Herman Cain and then [Rick] Santorum the next week and then we finally settled on [Mitt] Romney who had been the frontrunner all along,” Carroll said. “My guess—although there is no frontrunner—is that those flavor of the weeks will go by the board and we will pick an experienced candidate, not one that has no experience whatsoever.”

“I am sure he studied the issue closely and came to the conclusion that Donald Trump would be the best man for the job,” Carroll said of Doherty. “At this juncture I am not prepared to agree with him.”

The debate will air at 8 p.m. tonight on CNBC. 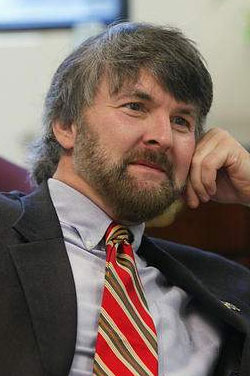