Mr. Simon came into Lafayette to ask for a job. Despite the fact the young chef had already cooked at haute-cuisine palace Lutece, his appearance didn’t scream fine dining.

“He had long hair,” Mr. Vongerichten recalled at Mr. Simon’s memorial party in Las Vegas on Sunday afternoon. “I told him we have a kitchen with a window that opens to the street.”

If Mr. Simon wanted to work in that kitchen, Mr. Vongerichten told him, he would have to shave his head.

Mr. Simon showed up the next day with only half of his head shaved. Mr. Vongerichten asked him to put on a hat and said, “OK, you’re hired.”

I love this story because it sums up Kerry Simon’s life philosophy: I’m all about being world-class. I get there are high standards. I respect that the world has rules and boundaries. But, fuck it, maybe let’s try it my way for a while and see what happens.

What followed is the most fun culinary career in history: Mr. Simon helped Lafayette earn a four-star rating from The New York Times. He opened restaurants with Mr. Vongerichten in New York, London and Hong Kong. He was hired by Ivana Trump to cook at the Plaza Hotel, where David Bowie and Michael Hutchence would dine in his kitchen. He befriended, to name a few: David Lee Roth, Alice Cooper, Bill Murray, Tera Patrick and Tony Hsieh. Mr. Simon became known, thanks to Rolling Stone, as the rock-n-roll chef. He made dining as lively as nightlife in Miami and Los Angeles. He was the sweets wizard who reinvented junk food with brilliant riffs on childhood treats, the comfort-food pioneer who created soulful gourmet versions of meatloaf, burgers and chicken curry. And he became the King of Vegas, where he ran his Simon restaurant first at the Hard Rock and then at Palms Place before opening Carson Kitchen Downtown.

Over the years, I’ve written a lot about Mr. Simon, who died last month after losing his battle with a brutal neurological condition known as multiple system atrophy (MSA). But I only really knew him from his Vegas restaurants, so it was lovely for Mr. Vongerichten to remind me that Mr. Simon had already lived the life of thousands of men before he made it to the desert, and how he was already a fully-formed kitchen rebel in the mid-1980s.

Mr. Simon didn’t want a funeral, so his memorial at the Cleveland Clinic Lou Ruvo Center for Brain Health was one hell of a party–along with a reminder that the battle against MSA could be aided with our donations (keepmemoryalive.org). This was a celebration. As venue founder Larry Ruvo said in his speech honoring Mr. Simon, the chef would curse him if he didn’t remind the crowd that the goal for the day was for everyone to have a good time.

There were pretty women serving cotton candy, of course. There was food from local hot spots like Mario Batali’s Vegas restaurants, The Cosmopolitan, off-Strip sensation Lotus of Siam and many other friends of Mr. Simon. There were strong cocktails and healthful juice concoctions, fitting for a bash honoring a man who understood balance, a chef who told me he used to throw lots of tantrums (“You want to be an actor? Act like a fucking waiter,” was the kind of sentence the always amusing Simon might use to berate lazy employees) but later became one of the most spiritual men I’ve ever encountered.

Mr. Simon embodied Vegas glamour but also its contradictions. He died peacefully at the age of 60 last month, and the city that still belongs to him continued to honor his memory Sunday evening. Properties that have little in common but their love for this game-changing chef–from the Palms to the Cosmopolitan to Gold Spike to the Station Casinos resorts–displayed his image in glittering lights.

Vegas felt sad much of the day, but also felt something like unbridled joy. As Mr. Simon lit up the night once more, we remembered it was time to go out and have fun. 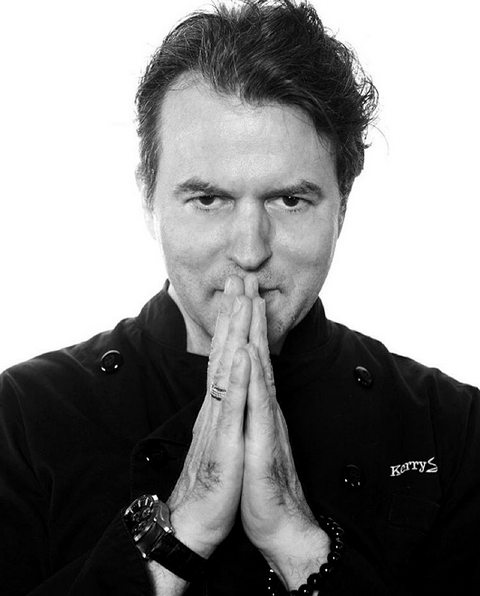