Just like real life, things are constantly changing in Firehouse 51, the station featured on the first responder drama Chicago Fire. Last season saw the death of paramedic Leslie Shay, the departure of firefighter Peter Mills and the arrival of two new paramedics, including neophyte Sylvie Brett.

Arriving on the scene in the opening installment of season four, in a memorable manner, is new cadet Jimmy Borelli. Borelli is played by Steven R. McQueen, whose credits include The Vampire Diaries and Everwood.

“I couldn’t be more excited,” admits McQueen. “When I heard about this, the opportunity to play a type of American hero, I jumped at it.”

About his character, McQueen reveals, “Yes, I’m, the cadet, the new guy, so people are going to — I don’t know if I’m allowed to say this, but — bust my balls. But, you know, the thing about Jimmy is he’s kind of a hard worker and while they’re tough on him, he finds a way to hold his own pretty quickly.”

To get to know the Midwestern city where the drama shoots, McQueen decided to do it in a unique manner — He ran the Chicago Marathon this past Sunday. (In a very respectable [unofficial] time of 4:16:39!)

Kara Killmer, who plays Brett, was eager to share what’s in store for her character this season as well. “There’s just a rainbow of different scenarios that paramedics get met with, and we’ve seen Sylvie go through a journey of having to kind of toughen up whenever she’s handling some of these emergencies. But, I think this season is really taking it to the next level. There is so much emotion and so much at stake because it’s just a taxing job, physically and emotionally. Given that, she’s trying to figure out, who can she lean on and bond with. There’s going to be a lot of her really figuring out what she’s made of.”

Chicago Fire is part of the ever-growing group of Illinois-based shows, which includes Chicago PD and, new this season, Chicago Med (beginning in November.) The trio may be interconnected on screen but Fire showrunner Matt Olmstead explains, “I’ll just say that the concept wasn’t sold as a three shows within one city, as you might imagine. The first thing is that the first show has to work and as you well know, there’s so many hurdles you have to clear to be a successful television show that it doesn’t happen that often. Once Fire got its feet on the ground, it opened things up for us to launch PD. When that happened, there was obviously discussion where we asked, ‘is there a life for another show?’ and we knew instinctively that there is and that’s where Med comes in.”

All of this began under the auspices of uber-producer Dick Wolf, who’s responsible for the ultra-successful Law & Order franchise. Olmstead says Wolf, while obviously busy, is still involved in the production process. “He likes to keep, as he’ll say, ‘a light hand on the wheel.’ When it’s going well, he encourages everybody to do their job. He likes to put people in the position to succeed. When things start to wobble, he gets involved.”

Speaking specifically about the writing process, Olmstead says, “If you’re fortunate, you get some great writers on your staff, and in my opinion, and based on my experience, that makes or breaks the show. We’ve had Andrea Newman and Michael Gilvary since day one and they’re still on the show. Derek [Haas] and Michael [Brandt] who created Fire are still with the show as well, so there’s been this continuity since the beginning. Then each season we bring in a few new voices and that helps as well.  The thing is, you’ve got to have the right people, work your ass off, cross your fingers and hopefully it all works.”

Killmer and McQueen both give kudos to the writers as well, expressing, “I’m so excited when I get a script,” says Killmer. “It’s amazing to see where they take things, like the arcs that they’re able to put into the stories. I feel like it’s sort of a pendulum swing. It always goes back and forth between conflict that’s happening within the firehouse and then what’s happening outside of the house. So I feel like you can really see that pendulum swing back and forth between those two things. It just makes it so interesting and keeps things fresh.”

McQueen admits that being new to the series, he’s continually curious about the direction of his character, saying, “Since this is a new character for me, I kind of like that with each new script I get to see more parts of Jimmy.”

Brett and Borelli aren’t the only members of 51 viewers have to worry about. Last season left off with nearly everyone in turmoil – Lieutenant Matt Casey is missing, Lieutenant Kelly Severide is a bit adrift in both his personal and professional life and Firefighter Gabriella Dawson has just discovered that she’s unexpectedly pregnant, with Lieutenant Casey’s child.

“Casey’s definitely in some hot and he has to do some things that he doesn’t really want to do and that takes a toll on him,” explains Olmstead. “With Dawson, this is a big turning point for her, obviously. Jobwise, she can’t be an active duty firefighter while pregnant, so she goes to work for the Arson Investigation Unit. She has some history there, but she’s away from the adrenaline of being a firefighter, which she really wanted to be and was intending on doing for many, many years. So this is both a step down and a step up because fairly quickly she is in charge of investigating an arson that 51 responded to and 51 is in hot for.“

Olmstead touched on what’s in store for Severide as well, saying, “Actually it’s a pretty cool storyline. Things happen that affect Severide’s position in the firehouse.  He’s not had a great track record of keeping people on his team and that’s why he gets dinged and for him it’s really humiliating. His approach to it is, ‘I can either do what I’ve always done in life, which is just breeze on out of here and go to the next job, or am I at the place in my life where this is worth fighting for.’ So all of this really throws him in the deep end and it’s interesting to watch that play out.”

It’s these kinds of personal and professional conflicts that keep viewers coming to the series, says Olmstead as he explains, “You really do have to be vigilant, storytelling-wise, because there is an old tip that I learned from a screenwriter many, many years ago who said, ‘You can’t have your story turn into a village of the happy people. If you take your eye off the ball, all of the sudden everybody kind of gets along, everybody is friends and then you’re like, ‘Oh shit, where did all the conflict go?’” 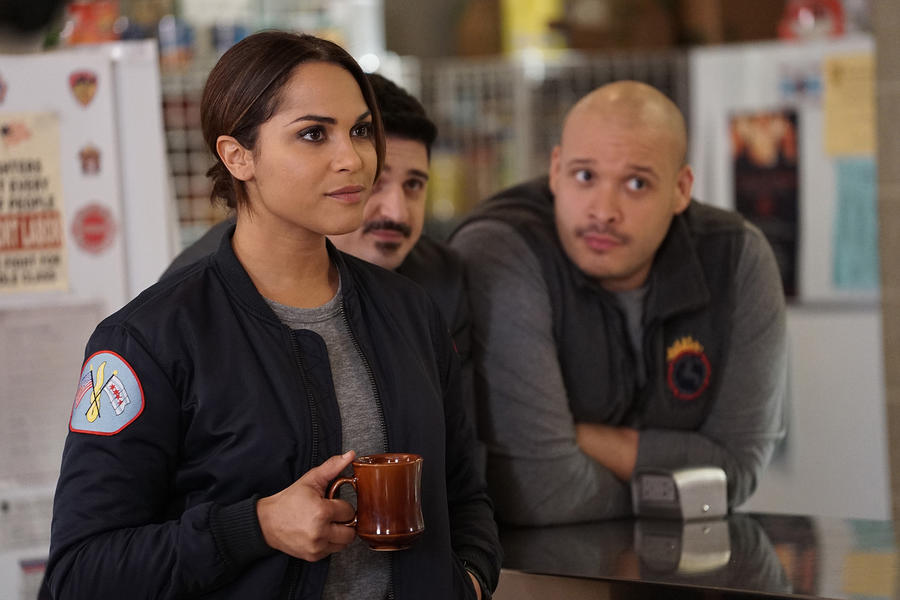