A little over a week after a street artist in Oakland, Calif., was shot and killed while he was working on a freeway underpass mural that was part of an anti-violence project, local children are picking up where he left off.

A group of students gathered at the West Street underpass, the very spot where 27 year old Antonio Ramos was murdered on September 29, to continue painting the mural he was working on when the fatal altercation occurred. Professional artists also helped out.

“Participation of the students is very important because they’re going to be proud of what they’re doing,” artist Javier Rocabado told ABC7 News. “This is going to stay until they grow older.”

Ramos was working on part of the Oakland Super Heroes Mural Project, which consists of six murals located in freeway underpasses in the area, when he got into a discussion with a passerby who allegedly shot him.

Attitudinal Healing Connection, an anti-violence non-profit, is behind the production of the project. Ramos had been involved with the organization since 2012.

A mother who brought her children to contribute to the efforts, Jaquita Covin, told Artnet News that she thinks it’s important to come out and help with the effort following the shooting. “I believe that, you know, showing them it’s ok, come down here, you can still come and help your community.”

Oakland police have described the suspect as man in his 20s who is around six feet tall and has a thin build and a dark complexion, according to ABC7 News.

Last week, people gathered at the site for a vigil to honor Ramos.

“He was concerned about the next generation and he wanted to help make a world where people live life as they should, being free and caring for others,” Ramos’s childhood companion, Marcus Norris, told the Oakland Tribune.

Over $36,000 has been raised for Ramos’s family members to help them cover funeral costs. 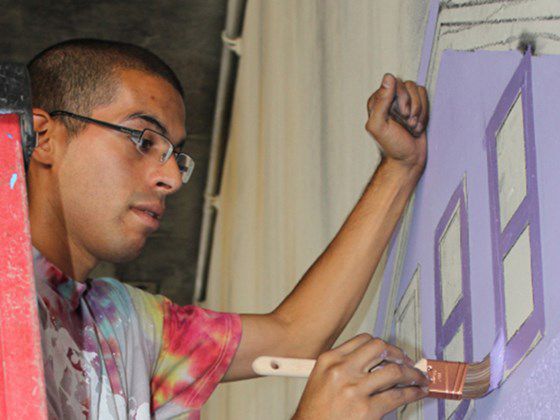