Since his time as showrunner on the king of all fan-theory shows Lost, Cartlon Cuse has been notoriously tight-lipped when it comes to the twists and turns of his TV projects. Which could prove a problem, as his latest, USA’s Colony, presents just as many mysteries as those posed by Lost’s pilot way back in 2004. The series, created by Mr. Cuse and Hercules screenwriter Ryan Condal, centers around Will Bowman (Cuse alum Josh Holloway) and his wife Katie (Walking Dead‘s Sarah Wayne Callies) living in an alternate Los Angeles, one walled off from the rest of the world and occupied by mysterious, controlling forces.

Before you ask, it’s not aliens.

After a screening of the Colony pilot at Hammerstein Ballroom during New York Comic Con, I sat down with Mr. Cuse and Mr. Condal backstage to try and pry away some of those cards held so close to Mr. Cuse’s chest. Along the way, we discussed the art of world-building, how modern television is similar to the Renaissance, and of course, Lost.

Observer: You mentioned during the panel it’s been two years since you came up with this concept. How valuable is that time in making sure you got everything right?

Carlton Cuse: It’s given us the time to really discuss the world in a lot of depth, and think about a lot of the details. In small ways that might not even be noticeable, the conception of the world as you saw it in the pilot reflected a lot of thinking about not just the big picture questions, but a lot of the smaller questions. When you’re world-building, you have to make a million decisions about everything from the grander issues, like the level of oppression, to whether there are cars…

Something I enjoyed about the pilot is there was no exposition dump, you didn’t get all the info thrown at you in the first ten minutes. How did you decided to parse out the information and at what speed?

Carlton Cuse: To be really honest, we had done this other pilot together, The Sixth Gun, and we basically found that by the end of the process the script was just one giant expositional dump. We very consciously didn’t want to find ourselves in that situation. I think once you find yourself down the expositional path, you’re on the road to ruin. All exposition usually comes at the expense of character, or narrative.

You said on the panel that you were inspired by a picture of occupied France, and the juxtaposition of people at a cafe as Nazis marched down the street. Is there a juxtaposition you wanted when you set Colony in LA?

Ryan Condal: We really did not want to present a dystopic world. My joke is that it’s not dystopic, it’s not utopic, it’s just topic. It falls right in the middle.

Ryan Condal: Correct. The thing that appealed to us creatively was that when you start looking at Los Angeles geographically, it lends itself to telling a very engaging version of the story. You can easily set the story in New York, but because New York is already this huge urban center, you’re just gridding it off. With LA, the city sprawls. It’s a huge urban place, and you have those hills and expensive real estate in the distance. We have a lot of locations for years that we haven’t used yet.

Also, frankly, with TV where it is now so much production has left LA, a city that we both love. LA has become an almost exotic location to shoot in. That really appealed to us, seeing LA as a character in a TV show again.

[Mr. Robot creator] Sam Esmail told me earlier today that USA gave him an incredible amount of creative freedom for Mr. Robot. What’s your relationship like with USA?

Carlton Cuse: USA has been immensely supportive, because I think they’re extending their brand. It’s such an old fashioned idea to think networks are stuck with any particular brand. What people watch now are just shows. Internally, within a network, there needs to be an openness to changing your model, to being bold, to take risks. USA supports that vision.

You mentioned on the panel you had Josh Holloway in mind for the role, and you’ve obviously worked extensively with him on Lost. Do you ever find yourself accidentally writing Sawyer?

Carlton Cuse: It’s funny, initially I did kind of think about that. I thought about whether it was necessary to make the character different than Sawyer. But when you film a show it takes on a life of its own, because then it becomes a collaboration. Once the show came to life, it was its own thing, and Sawyer doesn’t really fit in that world. As a writer I’m very responsive to what actors do. And I think Ryan and I quickly realized that Josh had created this Will Bowman character, and he was different. He had a level of responsibility, and authority, and a role as a parent that would never use to define Sawyer. Sawyer was this renegade bad boy, and a fantastic character, but this is a different guy. And when I saw Josh play that guy, I adjusted my writing to this new mold.

Ryan, how are you finding the TV writing process, as someone relatively new to it?

Ryan Condal: I love it. My very first experience writing for television, where it was actually a job, was the Sixth Gun pilot three years ago. TV opened a whole new world for me. Suddenly, you’re the guy. You’re the person everyone looks to, you’re in charge, and it’s your vision that you’re trying to put up on screen. It’s a combination of that, and being able to tell longform stories where you’re not just limited to two hours, 120 pages of script.

And Carlton, as someone who has been in TV for a long time, what is your view on the current landscape? Is it really as good a time for storytellers on TV as everyone says it is?

Carlton Cuse: Absolutely. When you think about Florence during the Renaissance, you had a really rich city with a lot of patrons supporting artists. There were all seeking quality. While this may not exactly be the Renaissance, I do feel you have some similarities. I think [FX President] Jon Landgraf said there’s something like 50 companies making TV shows, and the main criteria is quality. Everyone wants to make really good shows. We’re now in a television business where people are trying to outdo each other in terms of quality.

Really as recent as the beginning of Lost, there was really very little cable production. Back then networks were interested in mass audience shows, which meant seeking the lowest common denominator kind of storytelling, the kind that wouldn’t offend, isolate, or segregate anyone. Now it seems the focus is ‘be as bold and innovative as you want.’

I still hear, probably weekly, people’s opinions on Lost both positive and negative. What’s your opinion on this? What do you think of the fact that when you hear “Carlton Cuse’s new show,” the comparisons to Lost come immediately?

Carlton Cuse: Look, it was an extraordinary experience to be a part of a show that created the buzz that Lost created, and that has had longevity. I can’t explain why people still talk about it, but I’m happy that they do. As a writer and an artist, sort of the final part of the process is a communion with your audience. We had a really strong communion with our audience on Lost. So I never mind when someone comes up to me and says ‘Hey I love Lost,’ or ‘You must get tired of hearing about it.’ No, it really is so gratifying that people still watch it, much less care about it. It’s something where Damon Lindelof and I spent six years of our lives working monastically, fifteen to sixteen hour days, often seven days a week. We poured  ourselves heart and soul into that show for six years. It’s gratifying to know that people still care.

And, of course I have to now be that person to compare your new show to Lost. But Colony seems like a show that could breed fan theories in the same way. I’m not even going to try and guess what the Occupation is on Colony, but have you heard anyone guess correctly yet?

Carlton Cuse: It’s hard to say what the obsessions of the audience will be, because we’ve only screened it twice so far. It’s a little too early to see what people are going to think. I will say this though…there are mysteries in Colony, definitely, but I do not feel like the show hinges on the mysteries. There’s your significant difference between Lost and Colony, I can tell you that. 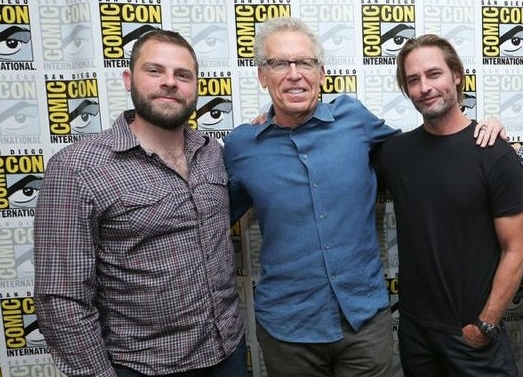