It turns out the debate over the Iran deal is far from over.

My good friend Senator Cory Booker of New Jersey, along with other members of Congress who supported the deal, believe they can mitigate the damage done by this disastrous agreement by supporting new legislation in Congress to make it official U.S. policy that all options, including military action, are available to prevent Iran from obtaining a nuclear weapon. The Iran Policy Oversight Act of 2015 also authorizes additional aid to Israel, requires biennial reports on Iran’s nuclear breakout time and its support of terrorism, and requires the appointment of a State Department official to monitor Iran’s compliance with the deal.

Rather than improve a bad deal, this legislation is really an admission by Mr. Booker and others that they made a terrible mistake in supporting the agreement. If the Iran deal did not endanger Israel as opponents warned, why is it necessary to provide more aid to Israel? If you trusted the president’s assurance that Iran can’t build a nuclear weapon for at least 15 years, why are reports needed to assess its nuclear breakout time? If we were also assured Iran won’t cheat, why is a monitor needed?

Support for this deal will not undo the damage done with constituents. The Iran deal was the signature foreign policy legislation of our time. Playing politics with Israel’s survival is not quickly forgotten.

For weeks I made the case personally and in print to Mr. Booker and other lawmakers with whom I am friendly. They had an obligation to oppose the Iranian nuclear steal because it was flawed and harmful to the interests of the United States, and dangerous for Israel and America’s other allies. All but four Democratic Senators chose to support the deal and, much more gravely, joined the filibuster preventing the catastrophic agreement from even coming to a vote. Now, supporters understand the consequences of what many of their constituents see as a betrayal of faith in their judgment.

I refer to the agreement as the Iran “steal” because Iran is going to get $100 billion dollars or more for practically nothing. Anyone paying attention to the news has heard the Supreme Leader of Iran say his country’s policies toward the United States will not change and he remains committed to the destruction of Israel. Iranian crowds are still incited to chant “Death to America” and “Death to Israel.”

The ink was hardly dry before Iran began testing a new ballistic missile capable of carrying a nuclear warhead.

Even before reaping the windfall from the steal, supporters of the deal are seeing the consequences of their decision throughout the region. Sensing weakness from President Obama’s negotiations, Iran is escalating its meddling throughout the region, doubling down on support for Syrian butcher Bashar al-Assad as well as Hezbollah and Hamas terrorists. Russia is expanding its footprint, undoing decades of U.S. policy aimed to keep Russia out of the Middle East. Palestinians are also feeling emboldened by what they see as the abandonment of Israel by Congress and the Administration. Is it any coincidence that violent attacks against Israelis intensified after the capitulation to Iran?

Iran cheated on prior commitments, and I and others warned the same thing would happen now. The ink was hardly dry on the agreement before Iran began testing a new ballistic missile capable of carrying a nuclear warhead. The consequences for Iran? Nothing. Absolutely nothing. The New York Times reported just yesterday that President Obama ordered the US government to begin dismantling many of the crippling sanctions that had originally brought Iran to the table.

Opponents of the agreement also warned that Arab states did not trust the deal to prevent Iran from getting a nuclear bomb, and rather than make the region safer it would stimulate an arms race. The Saudis have consistently said that if Iran gets the bomb, they will too. Just last week it was reported the United Arab Emirates’ ambassador told a member of Congress that since the United States endorsed its worst enemy’s right to enrich uranium, America’s friends are going to expect the same consideration.

Support for the Iran deal was an indication that too many Democrats in Congress take the Jewish vote for granted.

Mr. Booker was honest enough in the statement he issued supporting the deal, saying that, “Even with increased vigilance by the United States and our allies this will bolster Iran’s conventional weapons threats in the region.”

Mr. Booker echoed what many opponents of the deal maintained–that is, contrary to Mr. Obama’s claim that his deal is the only alternative to war, the flaws in the agreement are likely to increase the probability of war. “While several key forms of monitoring will continue in perpetuity,” he observed, “Iran’s opportunity for a nuclear breakout can conceivably become shorter than it is now and much harder to detect given the potential future size and breadth of their program. In essence, we run the risk that, after 15 years, we crowd out the opportunity for diplomacy or effective re-imposition of sanctions. If Iran’s breakout period becomes so short that the transition to a bomb is a step that would take a matter of weeks or days, we may be left with a binary choice between accepting Iran as a nuclear state or taking military action.”

Support for the Iran deal was an indication that too many Democrats in Congress take the Jewish vote for granted. Representatives such as Debbie Wasserman Shultz and Jerrold Nadler essentially thumbed their noses at their pro-Israel constituents. For the past few weeks I have received an endless stream of angry emails from Jewish communities where I brought Mr. Booker to speak over the years. Mr. Booker was the biggest recipient of campaign donations from the pro-Israel community in the 2014 election. Those who supported him wrote to me, expecting him to fulfill the promises he made to stand with Israel. On the most important vote affecting Israel’s security in a generation, however, Mr. Booker, they said, had failed those supporters and they are angry.

The criticism is not entirely fair. I feel compassion for my friend because I know Mr. Booker was under tremendous pressure from the president and other members of his party to approve the Iran deal. But history brings its own pressures. In light of Iran’s violation of the agreement just a few days after it was finalized, the deal’s supporters are beginning to understand how they will be judged by history and their constituents.

To my close friend Mr. Booker and other supporters of the deal, we say perhaps it’s time to assess whether a mistake was made. Why support a horrible deal which you now seek to remedy with further legislation? Rather than trying to put a band aid on a malignant tumor, work with your friends to keep sanctions in place and prevent the release of frozen funds as long as Iran maintains a nuclear infrastructure, supports terror, destabilizes the region and threatens the United States, Israel and its allies.

Shmuley Boteach, “America’s Rabbi,” whom The Washington Post calls “the most famous Rabbi in America,” is the international best-selling author of 30 books, including the upcoming Israel Warrior’s Handbook.”Follow him on Twitter @RabbiShmuley. 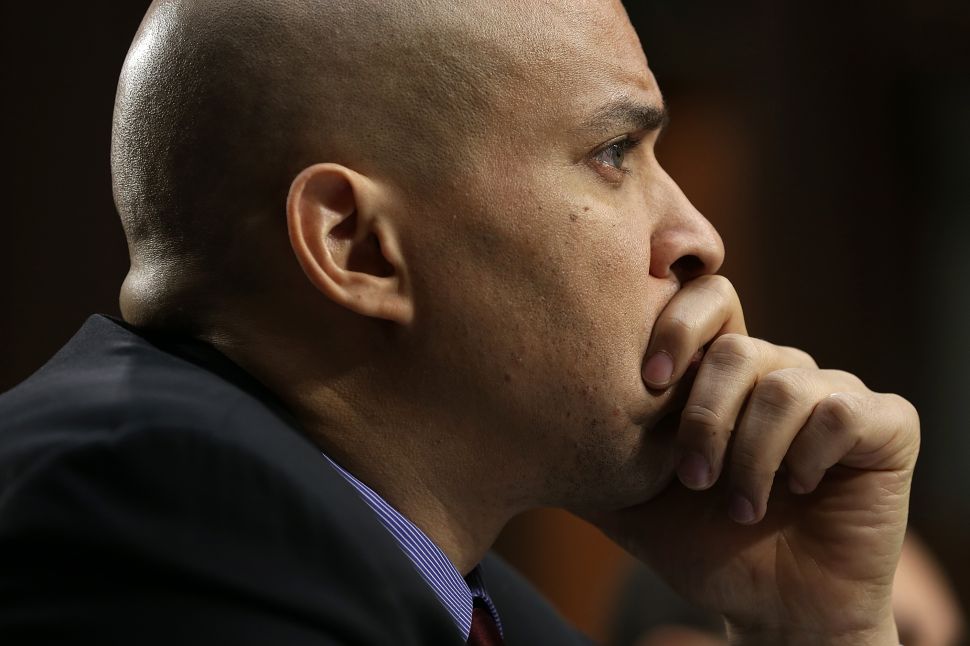