Gov. Andrew Cuomo brushed aside Mayor Bill de Blasio’s main objections to having the city pony up $3.2 billion toward the Metropolitan Transportation Authority’s construction and maintenance budget as “a red herring” and “a joke.”

Speaking to reporters today about the increasingly bitter feud after an unrelated event at Columbia University, Mr. Cuomo summarily dismissed Mr. de Blasio’s assertions that the state could not be trusted with additional funds because the governor had a history of taking money out of the MTA budget to use for other projects. The governor mocked this argument, claiming the only time he had ever withdrawn money from the MTA budget was last year, in which $20 million of Albany’s $1 billion outlay for the authority was used to pay off some of the MTA’s bond debts.

Mr. Cuomo said there had been no progress in his conversations with the mayor’s office, and called claims that he might take money out of the capital plan for other projects elsewhere in the state “a red herring.” He pointed out that he had moved to allocate $8 billion from the state’s general fund for the five-year, $32 billion capital plan—which includes roughly a thousand new subway cars, 1,400 new buses, platform repair, four new Metro North Stations in the Bronx and Long Island Railroad access to Grand Central Station—and handle all bonding and debt service.

“That is written down, that is bulletproof. That is a non-issue. Our $8 billion is there, is intact, it will be there, and there will be no diversion. That’s not what this is about. This is the city doesn’t want to pay, as they say, $3 billion. I say, it’s invest $3 billion,” he said, pointing out it was his administration that proposed the projects in question. “By the way, it’s my idea to invest more than ever before in the MTA. If I didn’t want to invest a lot of money in the MTA, why would I have come up with the idea to invest a lot of money in the MTA, right?”

Mr. Cuomo repeated his assertion that “the city can afford it” because it enjoys a $7 billion budget surplus, and that the city would get “the money back in dividends.” He warned that failing to fund the project would mean more automobile traffic and fewer people coming into the city.

The governor again claimed that legislators from upstate and Long Island would refuse to allocate the $8 billion if the city paid in less than the $3.2 billion requested, and even said “it would be unconscionable to ask.” Nonetheless, he vowed to ask anyway.

“If the city doesn’t fund the plan, we will still try to get it passed,” he said. “I can’t promise, because I’m not sure what the legislature says if the city reneges. But I have said I will do my best to get the $8 billion no matter what the city does. It does reduce the chances of passage, however. And, even if it passes, it will be a scaled down plan.”

Mr. Cuomo denied that there might be political ramifications for either himself or Mr. de Blasio, claiming the conflict is so complicated as to be beyond the comprehension of the average person.

“It’s not about the voters. And it’s not about blame. I don’t know that anyone understands any of this except, because it’s so complicated. But I think the riders will say the system still has significant problems, and the system hasn’t been improved,” he told the Observer.

Mr. de Blasio’s administration has denied that the city is running a surplus, since its larger-than-expected revenues from last year have already been allocated. It has also repeatedly pointed out that city residents fund nearly three-quarters of the MTA’s yearly budget between taxes, tolls, fares and the $100 million stipend City Hall has historically kicked in annually.

The administration agreed this year to increase the city outlay for the MTA to $657 million over the next five fiscal years.

In response to Mr. Cuomo’s comments today, the mayor’s office claimed the governor had “raided” the MTA budget of $270 million during his four years in office, and deposited the money in the state’s general fund—$200 million the first year, $20 million the following year, $30 million the year after that and then $20 million last year. Mr. de Blasio’s office said it would only pay in if there were a guarantee Albany would not make more such withdrawals.

“As the mayor has said for months—the city is ready to do even more to help address the MTA’s shortfalls,” spokeswoman Amy Spitalnick said in a statement. “But not until we know that no more money will be raided from the transit system, New Yorkers are told where any new state money is coming from, and NYC’s taxpayers have a real say in how their money is spent.”

Updated to note the increase in the city’s set-aside for the MTA. 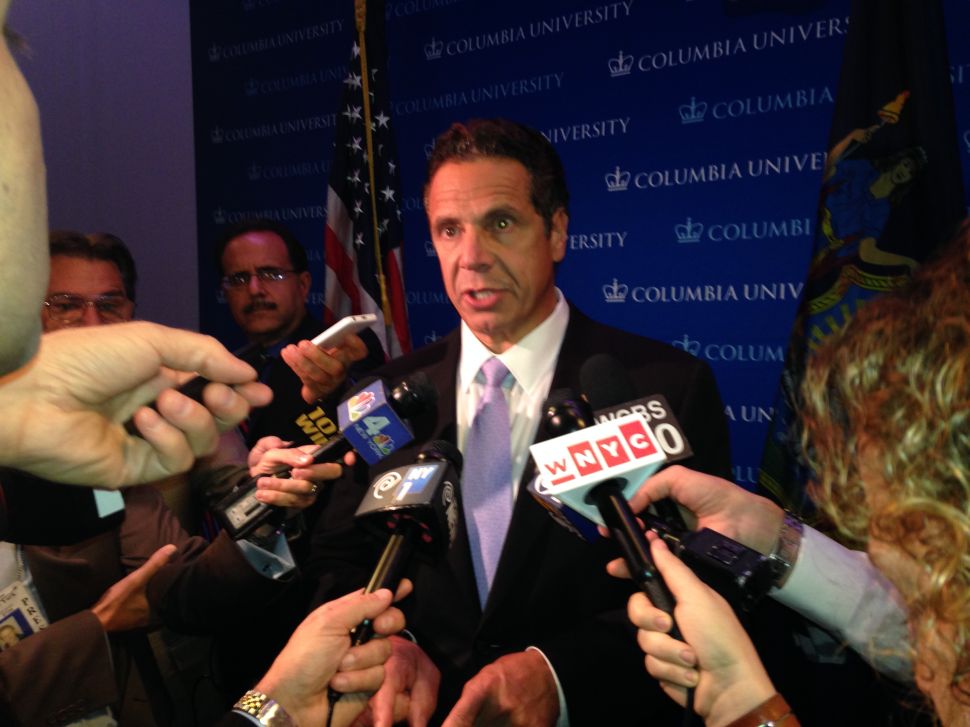