To celebrate this weekend’s premiere of the blood-splattered, chainsaw-wielding and downright groovy Ash vs. Evil Dead, we’ll be rolling out a new interview every day this week with the cast and creators. Yesterday was Ray Santiago. Today: another newcomer, the spirited Dana DeLorenzo.

When your day includes an interview with the one-and-only Bruce Campbell, you assume that conversation will be your most lively of the day. And then you speak to Dana DeLorenzo.

That doesn’t mean she doesn’t have issues with being terrified of monster arms and undead old women like the rest of us. I met up with Ms. DeLorenzo at the New York EDITION hotel to discuss her “oddly comfortable” relationship with Sam Raimi, eating lunch with Deadites, and the time she ruined an entire shot because she was too scared.

“Sam Raimi calls action, hand comes through the glass, I SCREAM, and…I duck. This poor monster hand is waving back and forth trying to find me.”

Observer: I just came from talking with Bruce and Sam…

Dana DeLorenzo: Oh, the two of them together! It’s like watching Abbot and Costello.

Is there any pressure coming into not only a franchise like Evil Dead, but that already established relationship of Bruce and Sam?

NO, why would you say that?? Yes, I live in pressure, constantly. First of all, I have more of a comedy background, and even then I have never done anything close to anything this broad of a reach. I’ve never done anything that has such a strong fan base. I didn’t know how it would be received, I didn’t know how we’d fit in. But, this is a testament to Sam and Bruce, they immediately washed away those fears because of how they treated us from day one. This happened very quickly for me, I had an audition, I had a call back, and the very next time was with Sam and Bruce. I’ve auditioned 15 times for two lines on a show before. I never thought I was going to get this role from the get go, which is probably why I got it.

Why do you say that?

Really, it was like ‘Why am I wasting their time? Why am I here?’ Turns out it was written in the stars in such a punny, annoying way. I immediately was oddly comfortable with Sam. So much so that after my audition, Sam turned his back to me to talk to the casting director, and I interrupted him! I don’t know what came over me. I said ‘Well, why don’t I just do it again?’

Sam turned around and said ‘Excuse me?’ And the room changed.  It wasn’t until afterward and people were like ‘well you put yourself on a chopping block. You just told Sam Raimi you wanted another take.’ Luckily, I delivered and Sam has told me he was really glad I asked for another take. From that moment on, I had such a great relationship with him. It was this beautiful like tandem bike pedaling where they started off with a script, then Sam asked me to help with some scenes with Kelly.

So your character was a collaborative thing?

Yeah, and I’m like Sam Raimi is asking me for help on a script! I’m just some girl from Yonkers. I thought he was being crazy. He says ‘No, I trust you.’ And then I’m sobbing, and I’m writing in my diary about how Sam Raimi told me he trusts me. It was great after a long time of hard knocks and rejection. It was a Cinderella moment. Sam was so passionate in telling the story, and making sure all of us were on board. At the same time, I just wanted to sit back and say ‘I’ll do whatever you want. Here’s my two cents, but please, whatever you say, Mr. Raimi.’

I’m interested in what the direction is like scene to scene, in a show that toes the line so closely between horror and comedy.

To be honest, I had to do very little acting for the scary scenes. Because a toaster goes off and I will scream. I am that person. I actually ruined a shot in the pilot.

We’re in Ash’s trailer, there’s some weird noises. I back up against the window. Here, I’ll act it out for you.

[note: Ms. DeLorenzo did in fact get up and act out this entire thing]

Now, I’m an actor. I know this is make-believe. I’m backing up, the Deadite hand is supposed to come through the window and grab me. I hit my mark, we’ve rehearsed it, we even shot a few times without the glass breaking. And the actor is crouching outside with his monster hand, he can’t even see me. Sam Raimi calls action, hand comes through the glass, I SCREAM, and…I duck. This poor monster hand is waving back and forth trying to find me.

Sam Raimi comes over and says: ‘Uh, Dana, that was great. But, uh, we’re going to do it again. This time what would be really swell is if you could keep your head up so the camera can actually see you.’ Oh, the camera needs to see me? That’s a veteran tip for you.

In terms of the comedy, Bruce is the king of the one liner. His character has his own comedy style. Luckily, I love my character’s sense of humor. It’s dry, sarcastic, bustin’ chops. And I think one thing I’ve learned from doing this is, you just have to play the truth of it. At the end of the day we are telling a story. It’s a story of good vs evil. I just had to stay in my lane, do what was in front me, and when it came to the horror stuff I really had to do very little acting because I was legitimately scared every time.

Can you chalk this up to how Sam Raimi loves to use practical effects as opposed to CGI?

Absolutely. I haven’t seen the whole series, but I can speak for being there on the day. I’d say the majority of the effects are practical, and the things that had to be CGI, because we can’t actually blow someone’s head off, are CGI. Our crew, especially the art department, are so talented and pay so much attention to detail. There’s a couple episodes where I walked on to a set that was just built, that wasn’t there a week ago, and was like a kid in a fun house. Like, ‘What is this? There’s actually writing on this paper that’s inside a jar that’s inside a drawer?’

Stuff the camera will never see.

Exactly, and that’s how you know these people have the fans in mind, and have storytelling in mind. For me that made a huge difference, because it really pulled the world together. And the Deadites are as terrifying in person as you’d think. I would see the actors, know that they are human beings, but they’d come out of make-up…like Mrs. Johnson?

I couldn’t even eat lunch that day. I grabbed a brownie and went in my trailer. Even without the white contacts, the makeup is so terrifying. Props to our makeup team, and special effects, they outdid themselves for this. That just goes to show this has been a really long time coming, and we really want to make the fans happy. Sam and Bruce [executive-producer Craig DiGregorio] were hell bent on keeping the same style. Nothing has changed about the style. This is the Evil Dead that people wanted. 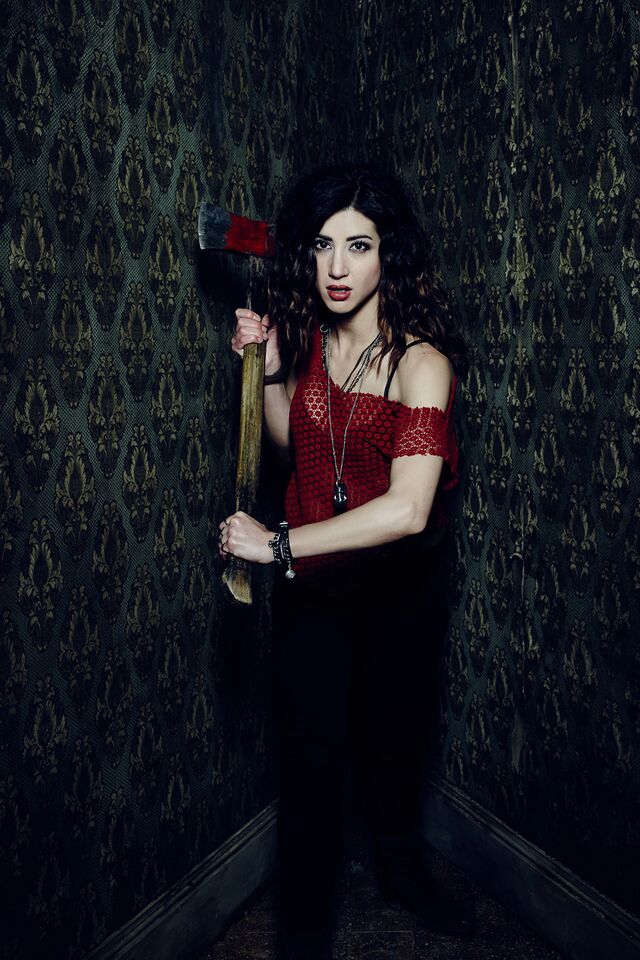