From the east side of Manhattan, the view of Queens is one of towering, glassy apartment buildings. Even from across the East River this pocket of land—the Long Island City waterfront—paints a picture of the high-ticket development and expensive condo units now synonymous with New York’s waterfront development. And most of it is expensive—a studio at 4545 Center Boulevard, one such tower opened by the developer TF Cornerstone in 2013, costs $2,530 a month. Two of those waterfront towers, however, market themselves as “the best apartment deal in New York.” That may very well be true, with studios priced as low as $494 a month, and a three-bedroom with waterfront views starting at $743.

The buildings, Hunter’s Point South Crossing and Hunter’s Point South Commons, look every bit as glassy as their neighbors. The amenities aren’t any different, either: a roof deck, fitness center, bike room, parking garage, even a rooftop farm. “This development is as good as it could be,” said Frank Monterisi, the senior vice president of Related Companies, the developer of the complex. “It’s been built exactly like market-rate housing.”

Why, then, is it so…cheap? The buildings are the result of a city request to develop 30 acres of waterfront land with at least 60 percent affordable housing. Related Co., the developer behind such high-profile projects as Hudson Yards, was selected for the first phase of development, proposing to make every unit in both buildings affordable. “We felt like that’s what we should aspire to,” said Mr. Monterisi. “And the demand for it has been mind-boggling.”

This is what affordable housing looks like today: namely, not all that different from market-rate housing. Its development often utilizes high-profile developers and architects, innovative building design and vibrant commercial components. Via Verde, an affordable development in the Bronx, set impressive standards for sustainable design, while Carmel Place, a mixed-income building in Kips Bay, is experimenting with modular construction.

Affordable housing also has an increasing presence in the market, with developers encouraged to include it in market rate developments by receiving incentives like tax breaks and increased building density. And while Mayor de Blasio’s proposal to create or restore 200,000 units of affordable housing over the next 10 years is the most ambitious push for affordable housing since Robert Moses’ post-World War II efforts, the two plans couldn’t look more different.

In this current wave of affordable housing development, mixed-use and mixed-income buildings are prioritized—a reaction to the concentrated poverty that emerged from Moses-era “tower in the sky” public housing projects. “We know that isolating a single income group is not the way to build healthy and integrated cities,” said Eric Wilson, the assistant commissioner of planning and sustainability at NYC Housing Preservation and Development. He explained that the HPD, a city agency formed in 1978 to focus on housing, now sets design standards not just for affordable housing but also how “mixed use” the project is, emphasizing things like retail space, community facilities and building amenities.

“The things that were not considered back then—park space, retail, community facilities—we view them as critical now,” said Don Capoccia, principal at BFC Partners, one of the developers for Essex Crossing, a 1.9 million-square-foot development under construction in the Lower East Side. Of the 1,000 rental and condo units planned, 500 of them will be affordable. The development also includes a community facility, retail, a public market, a movie theater and parks. “The design must be comprehensive to help the neighborhood evolve and grow,” he said.

“These larger affordable developments are trying to create regular neighborhoods of New York, with retail, parks and streets that people want to walk down,” said Nadine Maleh, the director of Institute for Public Architecture, a New York-based organization that supports “socially conscious architecture.” “Public housing was designed more like a campus. It’s concrete, segregated from the neighborhood. If you don’t live there, there’s no reason to walk in,” she said.

Developments like Essex Crossing, estimated to cost as much as $1.1 billion, depend on the tax breaks provided to affordable units, as well as the income that will someday come from market rate units. “Because of the market rate, we can do more than the typical affordable development,” said Mr. Capoccia.

But the comparisons between market rate and affordable design under the same roof can be touchy. At some luxury developments, like the AVA Highline rental in West Chelsea, finishes for affordable units are different—no stainless steel in the kitchen—although apartments are all the same size. Last year, One Riverside Park in the Upper West Side sparked an outcry for featuring one entrance for condominium owners and another for low-income tenants. In response, Mayor de Blasio banned the use of so-called “poor doors”—though, in fact, they were initially made possible by a change in zoning laws that de Blasio had voted in favor of while a city councilman.

Many architects and developers aren’t looking at affordable housing simply as an incentive to build denser luxury buildings or receive tax breaks. For Dattner Architects, who teamed up with Grimshaw Architects to design Via Verde, it was an opportunity to push the envelope on sustainable design. “We wanted to raise the level of design for affordable housing,” said William Stein, principal at Dattner. “It needed to be more than utilitarian.”

“We wanted to raise the level of design for affordable housing,” said William Stein, principal at Dattner. “It needed to be more than utilitarian.”

The LEED Gold building includes a roof terrace, community vegetable gardens, a central courtyard, fitness center, solar panels and high-performance apartment fixtures. There’s also a health care center located on the ground floor for both Via Verde and neighborhood residents. (Since Via Verde opened in 2012, the HPD has ramped up its requirements for sustainable features in affordable housing development.)

Over in Kips Bay, a modular development that will house micro apartment units is now under construction. Formerly known as My Micro NY, and now called Carmel Place, 40 percent of the 55-unit rental development will be affordable, with some units reserved for formerly homeless veterans. The apartments, sized around 300 square feet, were prefabricated at the Brooklyn Navy Yard before they were “stacked” at the construction site this spring. The stacking process took a mere three weeks.

“New Yorkers need choices,” said Eric Bunge, co-founding principal at nARCHITECTS, who designed the project. “They need the option of smaller apartments, of affordable units.” When asked about the potential of modular design to address the growing need for affordable housing, he replied, “It’s like asking the Wright Brothers what they thought about the potential of flight.”

Such a strong real estate market has also given developers and architects opportunities to rethink the design of Robert Moses-era affordable housing. “NYCHA offering land for development is a great opportunity for the city,” said Ms. Maleh, referring to a controversial proposal released this summer to build new affordable and market-rate housing on public housing land. “How can we look in these campuses in a different way? What do residents need? How can we integrate these buildings better into the surrounding neighborhood?” she asked.

One developer got that chance at the Ocean Village complex in the Far Rockaways, part of the city’s Mitchell-Lama affordable housing program. When L+M Development Partners purchased the 13-acre site in 2012, it was rundown, unsafe and had 350 vacant rental apartments out of 1,093. Then, Hurricane Sandy hit, destroying the building’s mechanicals. “When it opened in 1972 it was considered state-of-the-art,” said Rick Gropper, L+M’s development director. “But over time it went downhill. That started a vicious cycle, and people didn’t want to live there.”

L+M undertook an ambitious renovation, storm-proofing the building, renovating all the apartments, upgrading mechanicals, redesigning the facade, replacing the roofs and landscaping the grounds. The dingy brick facade was covered in an exterior cladding system that “dramatically changed the aesthetic and also solved infiltration issues,” said Mr. Gropper. Open spaces, which previously attracted crime, were renovated “to create clear lines of site,” said Mr. Gropper, and updated with lighting and security. The name was changed to Arverne View, giving new life to the complex. “The ‘tower in the sky’ design doesn’t work in every context,” he said. “How people want to enjoy spaces has changed.”

For Othniel Miles, a resident who has lived in the complex since 1983, the change has been dramatic. “There’s security, maintenance, cleanliness,” he said. “I don’t have to be scared walking around here anymore.” Before the renovation, Mr. Miles said that “If I could have left, I would.” But after the renovation, he’s inclined to stay. 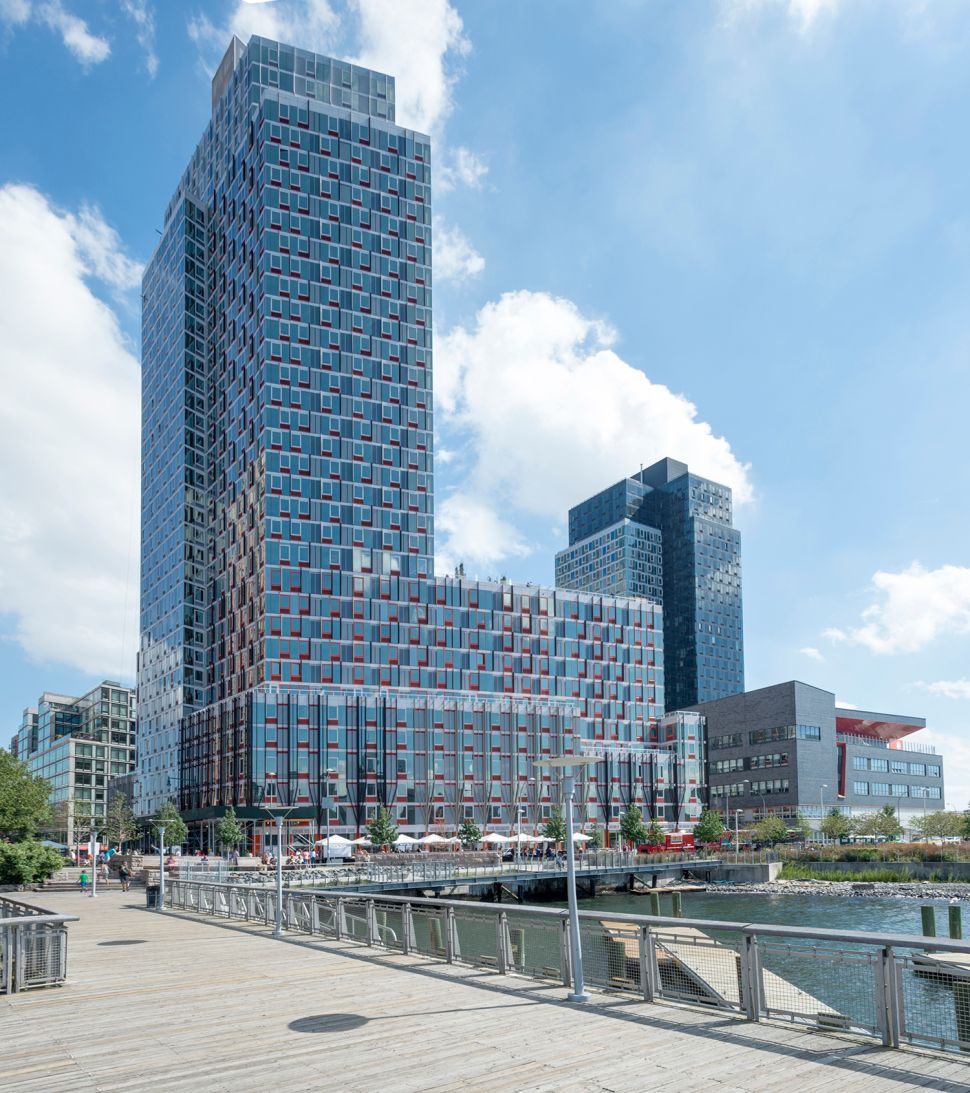