Whoo-ee, that was some clever storytelling. Plus: Vikings!

In an episode that turns out to be all about the power of the stories we tell, the cultural force of our fictions, superstitions, myths and legends, Doctor Who sets the stage for some more serious mythmaking of its own.

After four weeks of pretty complex tales with lots of moving parts, this week we settle down into what looks like a fairly straightforward Who story: alien invaders threaten an Earth community, the Doctor doesn’t know how to help them fight back, but he finally comes up with a clever plan, and they win. Hooray!

But of course the victory comes at a cost. And the Doctor’s reaction to that cost shows that this wasn’t really as simple a story as it originally seemed.

The abbreviated version of the story is this: the Doctor and Clara accidentally get captured by Vikings. While the Doctor’s trying to facilitate their escape by pretending to be a god, an alien race with much better god-faking technology (the Doctor’s choice was a yo-yo) drops by. Under the pretext of Odin taking the worthy to Valhalla, the aliens beam up all of the warriors of the tribe, mash them into a pulp and drink their testosterone. Presumably to get stronger or something? I’m not sure that’s really how chemistry works, but O.K…

Then the bad guys (they’re called the Mire, and they have creepy helmets and even creepier lamprey-like faces) are all set to be off to another world to mash up more warriors. Except that they also managed to kidnap a feisty and weird little girl named Ashildr (the cleverly cast Masie Williams) who on behalf of her village declares war on Mire. Bad move, because these are some of the biggest, baddest warriors in the universe, and the remaining Vikings who haven’t been ground up into juice are…not. Mostly bumbling old farmers.

Uncharacteristically, the Doctor advises the Vikings to run away rather face utter annihilation. But they don’t want to—they’re Vikings, after all. And the pleas of Clara, plus the crying of a Viking baby, convince him to stay and help them fight.

Of course they still have no chance of winning, and the Doctor doesn’t even have an inkling of a plan, until he realizes he needs to listen to what that crying baby is trying to tell him (the Doctor speaks Baby, remember). Turns out the baby’s very poetic sobs are about a store of electric eels the Vikings have just sitting around. So now they have a weapon they can use against the Mire, and with some clever engineering by the Doctor, they do, and the bad guys flee.

Those are the bones of the story. But that’s not really what actually happens.

The Doctor may think that the clue that helped him find his plan was a baby telling him about some eels, but it was actually the conversation he had just before that. Weirdo kid Ashildr was telling him about the stories she makes up, which she believes have the power to rescue or doom her loved ones. And it’s that power of story—the miracle of a story that people really believe in—that takes center stage here. Not eels.

See, the Doctor’s original logic in advising the Vikings to run may have been cruel, but it was also sound. If a ragtag bunch of Vikings defeated one of the greatest warrior races in the universe, they’d only end up making themselves a target for more of the Mire, or whatever other alien army decided to try its luck against them. It isn’t enough to defeat the Mire; they’ve got to make sure they’ll never tell anyone what happened. So, armed with this new confidence in storytelling, as well as a very skilled and passionate storyteller, the Doctor sets a second part of the plan in motion.

During the battle, they steal an alien’s helmet and put it on Ashildr, who uses the Mire’s own technology to make them think they’re battling a dragon. Instead, they’re actually running in fear from a totally ridiculous-looking monster puppet that the Viking girl has built. Which they record on Clara’s iPhone and threaten to show to the whole universe unless the Mire skedaddle. So the Vikings get to win, and they also get to keep it to themselves.

The entire plan actually boils down, the Doctor points out, to the power of story. They use one story, Ashildr’s imagined dragon (yeah, yeah, sorry), to defeat another story: the myth of the Mire’s fearsome reputation. (Fair play, especially as the Mire originally attacked them by co-opting their mythology, posing as Odin carrying the worthy to Valhalla.)

Just like Ashildr’s silly dragon puppet, which is “rubbish” until she creates the illusion around it with her storytelling skill, “The Girl Who Died” is a rather formulaic, bare-bones tale wrapped in a brilliant facade of myth. And in both cases, that’s the whole point. Without the rickety underpinnings, you don’t get embarrassed Mire—and you don’t get the hairpin turn that comes at the episode’s end, which could potentially shift the mythology of the Who universe in unexpected ways.

Because Ashildr dies. Using the alien helmet was just too much for her human heart. The Doctor wants to save her, but he’s bound by all those unspoken rules. Then he remembers another story—a story about himself. About how he’s done this before, saved someone he really wasn’t supposed to. (In a neat callback, the person he rescued was played by Peter Capaldi, back in “The Fires of Pompeii.” The Doctor unconsciously chooses the face for each regeneration from someone he’s once seen. And this particular one is meant to remind him that his mission is not to follow rules, but to save people.)

The problem is, in saving Ashildr, he’s not just saving a little girl, he’s rewriting her whole story. Because bringing her back to life renders her “functionally immortal.”

And he’s more than a little afraid that he’s also rewriting the story of the universe.

He’s certainly rewriting his own story. It is no accident, after all, that the Doctor seems to recognize Ashildr when he first sees her; it’s almost impossible they’ve never met before. Two people who both basically live forever are bound to cross paths sooner and later. In fact, it is now likely that the unkillable Ashildr now has an place in the overall story of Doctor Who—in its mythology.

Suddenly, whole worlds of speculation are opened up: Have we, the audience, met her before, as well?

We do know one functionally immortal person: Jack Harkness. The precedent would certainly justify the Doctor’s fear that he has forever changed reality. Don’t forget that Captain Jack’s immortality ended up nearly destroying the world (in Torchwood: Miracle Day).

What’s more, the immortal Ashildr—as the Doctor suggests, now a hybrid of Mire and human—could be the fulfillment of an ancient Gallifreyan prophecy, the one Davros quoted in episode 2, about a hybrid of two warrior races that the Doctor would have a hand in creating. And that, strolling straight into a prophecy, is harnessing the power of story on a whole other level.

I have my guess that we’re going to get other versions of the hybrid prophecy, other possibilities for who or what it could be. But we’re definitely going to see Ashildr again. 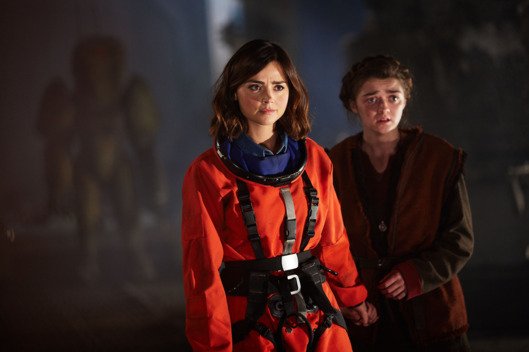