Oh that Arya! What a card.

I guess the hot streak of the last five episodes—one of the best runs this show has had in a while—had to end somewhere.

All things considered, “The Woman Who Lived” isn’t terrible. But after “The Girl Who Died,” an episode that looked simple but was actually wonderfully complex, this companion piece is something of a disappointment: a story that gestures at complexity but turns out to be rather simplistic.

Let’s start with the good: Maisie Williams is excellent as the much-older Ashildr—even better than I expected. The casting choice here was brilliant, and not only because of the crossover fandom potential. After all, we already know Williams can play the full range of this long-lived character, from last episode’s naïve courage to this one’s bitter rage and sadness—that’s Arya Stark’s arc, after all.

But this new, older version of Viking teen Ashildr, who has now renamed herself simply Me, is far more self-assured and cruel than Arya ever was, and Williams (after a couple of ever-so-slightly shaky scenes at the start) pulls it off magnificently. Her baby face plays excellently against the prepossession of the role, giving us access to the essential nature and problem of her character in every line and facial expression.

Because, of course, unlike Time Lords, human beings are not built to live for hundreds of years. For one thing, we just don’t have the memory for it. “Me” says she hardly even remembers the name Ashildr, or the village where she was born. A dubious claim, to be sure, but it is clear that Me has forgotten whole lifetimes worth of memories—whether they have simply faded over the centuries or she has chosen to excise them forcibly, like the pages torn out of her diaries.

The Doctor anticipated that she’d become bitter and hardened by seeing those she loves die, over and over. But he did nothing about it, save giving her the option to immortalize one other person—an option she has never taken. (Because how to choose just one person from across the centuries?) And clearly he did not realize she’d be quite so far gone by the time he caught up with her again. Losing one’s spouse is one thing, but watching all of your children die is something else again.

It’s no wonder she has adopted a distanced stance toward regular, short-lived humans, seeing them as “smoke” that blows away, or “mayflies” that exist only briefly. They’re just distractions, playthings for her to mock, or rob, or even slaughter.

Sometimes the Doctor also veers into the territory of seeing people at this distance. (We’re reminded of the index cards Clara made him consult a few episodes ago to remind him how to interact with people, and her absence in this episode is felt acutely.) Me, therefore, proves an excellent foil for him. The early scenes of them sparring are a delight to watch, tense and scary and tinged with the utter despair of two people who have both known too much loss to comprehend.

But then that despair rises to the surface, and all the steam goes right out of the episode.

First, Me begs the Doctor to take her on as a companion—she’s so tired of living a slow eternity here on Earth and wants to experience the freewheeling eternity of his life. But the Doctor refuses, later quite reasonably explaining that she is the opposite of what he needs in a companion, and he is not what she needs either. “We need the mayflies.” Regular people, people who have to value everything about life because it is so fleeting, keep them grounded, stop them from always looking down at the world from up in the clouds.

But before this argument is made, she reveals the plot she’s been secretly hatching all episode: If the Doctor won’t take her away, she’ll run off with another alien instead, the lion-faced Leandro from the planet Leonis. And if you think the name is over-the-top bad, you should see the mask. Doctor Who has its fair share of cheesy monster designs, but this one’s particularly goofy, like a Muppet lion you might have seen in one of those Jim Henson retellings of folk stories.

And the plan itself is equally simplistic and dumb. Me and the Doctor have stolen an amulet that is really an interstellar transporter, but it needs a death to open a portal. So they attend a hanging, which the condemned man and the Doctor try to delay with an impromptu comedy routine (literally, gallows humor). So Me steps in kills him herself—but Leandro was actually playing her, and the portal is bringing his conquering army to Earth.

And suddenly Me cares about people again! Just like that, after hundreds of years of solitude and condescension, she wants to save them all. So she uses her one get-out-of-loneliness-free card on the dead man, closing the portal and saving the day.

Thus the climax of the episode is also its low point: It’s not that Me’s sudden reversal isn’t narratively justified—she’s just been betrayed, and now she’s watching a slaughter—but it feels completely unearned. After all of the work the episode and Maisie Williams do to establish that she’s become cruel and unfeeling, revealing so quickly that the sweet Ashildr was there hiding underneath the whole time is far too easy. And far too gratifying to the Doctor.

At least by the episode’s end she has gained back most of her hardness and distance, with perhaps a bit more perspective. And the closing scenes are, once again, sweet and sad and well-written. Me has found herself a new role—as a living contrast to the Doctor. If she has to live her life plodding day by day through the fullness of time, then she’ll set her mind toward cleaning up the messes that the Doctor leaves when he pops into the timeline and then runs away.

And it’s clear we haven’t seen the last of her: She pops up in the background of a photo on Clara’s phone in the present day, 350 years later.

But a foil relationship is a two-way street, and the Doctor has learned things too. He  is realizing more and more that Clara is never going to decide to stop being his companion one day. She’s always going to ask to come on the next voyage, and the one after that, and he’s powerless to refuse her. And on a long enough timeline, certain things become inevitable. One of these days, just like Ashildr, he’s going to have to watch the person he loves most in the world die. 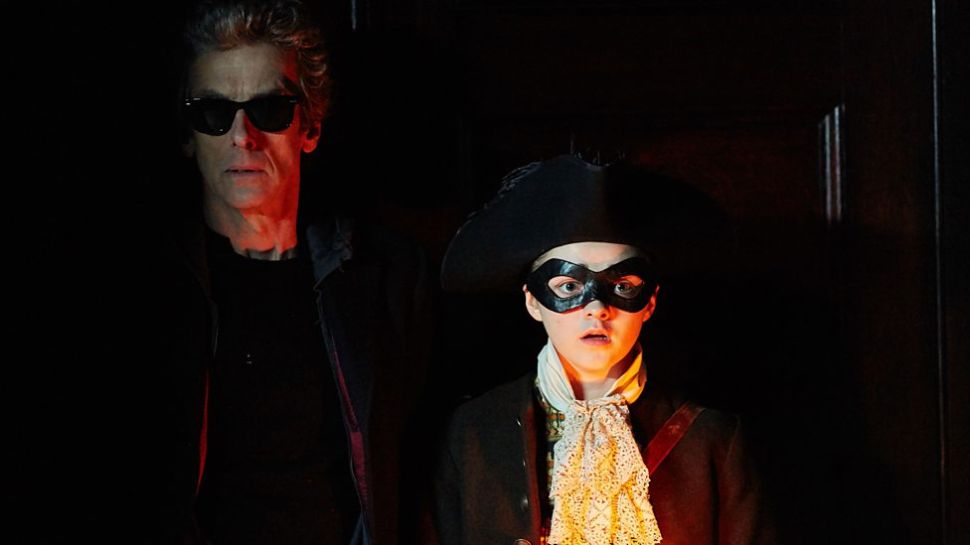