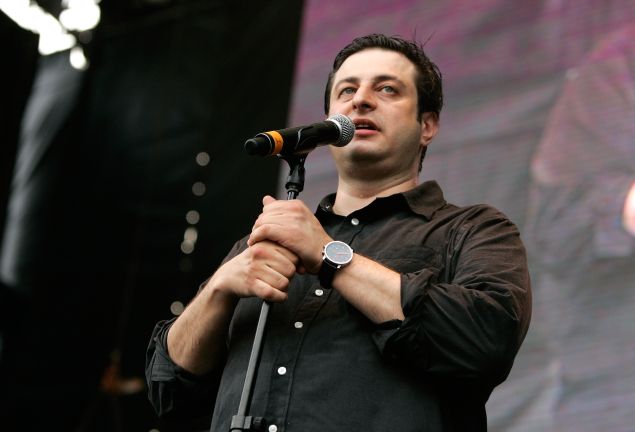 Eugene Mirman in Williamsburg, speaking to his coterie of hipster fans. (Getty Images)

On October 30, comedian Eugene Mirman (Bob’s Burgers, Flight of the Conchords) will drop his latest comedy “album” I’m Sorry (You’re Welcome). Released by Sup Pop, it’s  a nine-volume, seven-LP box set that includes a live standup recording. It’s also got some other stuff that’s not what you think of when you think “traditional comedy album.” Such as a sound effects library, a whole album about meditation, “Fuckscape” (“an erotic soundscape for lovebirds and adventurous friends”) and a whole section called “Audio Pharmacy.” Not to mention the 45-minutes of straight crying or the 195 orgasms he provided for the compilation. Also, you can buy it in traditional vinyl, or in the form of a bathrobe or a chair.

Observer: I read that this was supposed to be a hundred album series.

Eugene Mirman: It was never supposed to “be” anything. I had jokingly conceived of this hundred disk thing, but I was never going to make it. Then it occurred to me that I could make it…if it was like ten disks. It would still be ridiculous to have 45 minutes of me crying, even if it’s not part of a hundred disk set. And it was much more manageable. It’s even something that would be funny to listen to…in spurts.

Now the crying thing, that’s captured a lot of people’s imaginations. It’s not a loop, it’s actual crying for forty-five minutes. How did you get yourself to cry for so long?

The idea of failing was worse than the idea of succeeding. So you do just it.

What were you thinking about? A dead pet?

I would periodically think of sad things, yes. And I would just try to make it sound like I was earnestly crying.

It reminds me of early Firesign Theater, their conceptual comedy albums. Were you inspired by anything like that?

No, it was just a funny idea. A lot of things, like the meditation and stuff, I thought it would be funny for people to listen to. As for the other stuff, I just thought it would funny if I could feature a sticker on the album that said “Featuring over 45 minutes of crying!” As if that’s thing that everyone’s always wanted, and look, now I’m giving it to you! But to have that sticker, you have to cry for 45 minutes.

I didn’t want to just claim a thing that wasn’t true. I had to do the thing I claimed was true in order for it to be funny.  But it’s not all a concept. The sounds effects, they’re supposed to be funny when you listen to them. If you make a mix and put ten sound effects in it, you’ll laugh periodically between songs.

And piss off anyone you’re taking a long-distance road trip with.

It is the best treat for a long distance road trip, yes.

You’ve been really committing to some of these bits lately: not just the crying, but marrying people on stage as part of your Netflix special. You’ve really gone all-in.

It works way better when the people really care for each other. Once in a town, there were two guys who raised their hands, and it became very clear throughout the bit that they weren’t gay, they weren’t in a relationship, and it made it not work because they were just drunk and giggling.

I did! And I’ve married several gay and lesbian couples in the bit. But that one time they weren’t really in a relationship, it made the joke not work.

Yeah, exactly. Now they’ve rediscovered themselves. I wish it was legally binding: like I just turned two drunk twenty-year-olds into husband and husband.

With all the sound effects, has the issue come up of royalties? What if someone uses your material for their own work…do you get a cut?

Hopefully they will end up in hit songs, yes. Hopefully we’ll start hearing hits with me in the background saying “Fire truck! Fire truck!”

What artist would you most like to sample your work?

I think whoever can make the best hit song.

You can just say Beyoncé.

Sure, Beyonce, but you know, if Lady Gaga did it, it would be fine as well. Maybe Taylor Swift?

If any one of those three people can use a tiny bit of “Fuckscape” in their music, I could have the house of my dreams.

Talk to me about the digital drugs portion. As someone who takes a lot of real, physical drugs, I was intrigued by the idea of bringing it to a conceptual place, like “apple vinegar.”

So there’s a real thing that people talk about that’s called digital drugs, which is binaural beats that are supposed to affect your brainwaves. And there was a local news story, in Ohio or somewhere, that did a story like “There’s a new thing called digital drugs, and they’re gonna lead your kids to doing actual drugs!”

I watched it and thought it was really funny, and started reading about it. The idea is that you can listen to this stuff that affects your brain waves the ways that drugs do. I think that’s easy enough to do when you’re thinking of marijuana, or LSD. But then if you think about it for real, like amoxicillin or apple vinegar? You’re like, “There’s no way that when I have an infection, I’m going to listen to this instead of taking antibiotics.”

Is it…so it’s like, the Enya, Pure Moods soundtrack?

It’s like this real thing that people take about. So the digital drugs on my record are both real in the sense that there are the binaural beats which are the foundation of every track, and  then also a bunch of silly sounds over it. So theoretically, if you were to close your eyes and listen to my tracks, it wouldn’t be dissimilar to listening to anyone else’s binaural beats.

That’s so great because I haven’t gotten my Xanax prescription filled yet.

You can use my acoustic pharmacy.

Did you work with anyone on the album?

Yes! Two friends who I’ve known for a very long time from Boston, Matt Savage and Christian Cundari. We spent the last three years working together. There’s no way I could have done it without them; we recorded it together and they did a lot of the music. They are the real musicians.

Are we talking a whole three years, or like, Boyhood “three years?”

Oh no! Not three years straight. We didn’t Led Zeppelin it where we rented a castle. I would periodically go to Boston a couple times a months for the past three years, we’d work three or four days and then email back and forth the files.

What are some of the weirdest discoveries you made while recording this album? 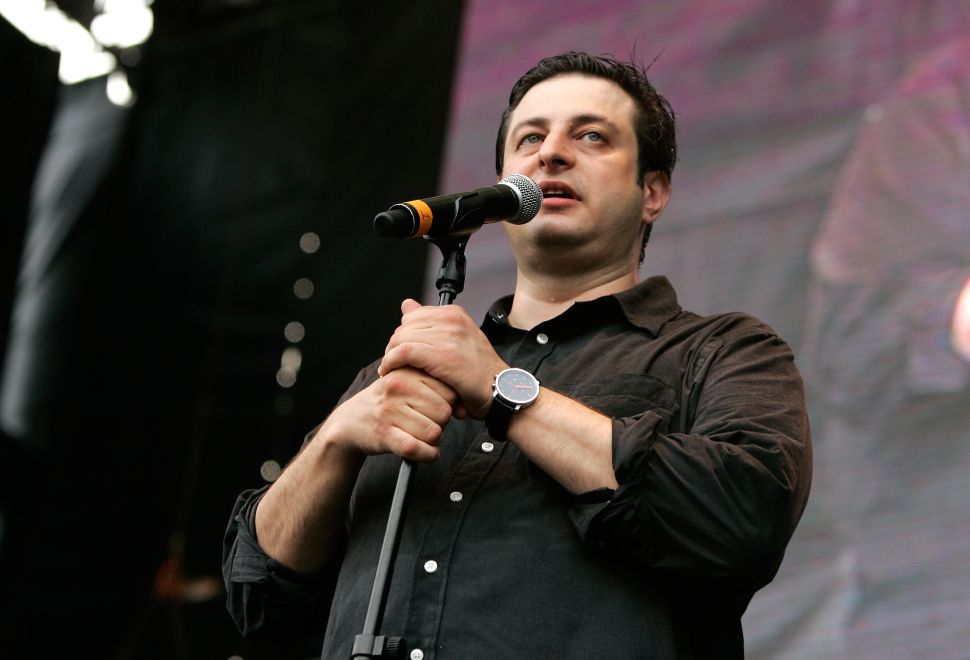