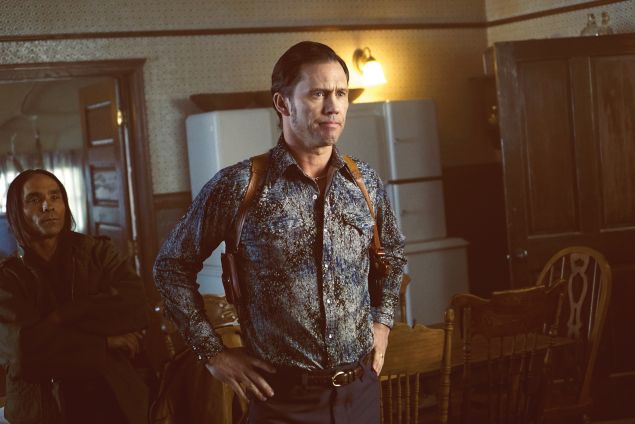 In the mood for grim pronouncements about the nature of power, the legacy of family, and the fate of empires? Chances are Fargo is not where you’d normally look. Sure, Lorne Malvo had some heavy shit, man to say about living life in predator mode, but his deranged outlook was a sort of solo semi-fascism, a view in which life is nothing but struggle between the weak and the strong and no alliance has value beyond temporary exploitation. Beyond that, the show’s take on morality has been pointedly small-bore, demonstrated through the selfless or squalid behavior of individuals. In that respect, showrunner Noah Hawley has much in common with his inspirations, Joel and Ethan Coen, or  with the more surreal and supernatural work of their spiritual cousin David Lynch, who like them tends to split his narrative time between Small Town U.S.A. and the City of Angels. They examine violence for its place in human nature, not its potential as a force of nature.

But the stuff we heard from Floyd Gerhardt, the matriarch of this season’s German-American gangster heavies, in “Before the Law,” this week’s episode? Strip away the Minnesota accents and you could just as easily have been in Tywin Lannister’s Red Keep, Lucious Lyon’s boardroom, or Frank Semyon’s Vinci casino, if not for the Minnesota accents. Faced with the incapacitation of her crimelord husband at precisely the moment a much larger organized-crime outfit from Kansas City makes a takeover bid, she sits at her humble kitchen table and begins talking to her murderous son Dodd with Game of Thrones’ grandeur,True Detective’s delusions thereof, or Empire’s canny balancing act between them.

Thrones, perhaps, is the most appropriate analogue for the game being played here. After all, Floyd and Dodd are at loggerheads over the latter’s insistence on his right of primogeniture; between this and his gleeful ear-severing torture of some poor dead dude in the family barn, he’s the Joffrey Baratheon of the Upper Midwest. During their sit-down, his mother insists he break bread with her—“I’m your mother; you will eat with me”—like something out of Westerosi guest right. “That’s what an empire is,” she proclaims upon finishing the generational rags-to-riches saga that led them to this moment. “It’s bigger than anyone son, or daughter.” Demanding Dodd’s support during this time of transition, Floyd tells her son he’ll be amply rewarded once the danger has passed: “I’ll hand you your legacy, and I will turn my thoughts to the grave.” You half expect her to tell him “Winter is coming,” at least until you look out the kitchen window and recall that that particular ship has sailed.

But Floyd, and by extension actor Jean Smart, isn’t the only one dispensing words of promise and menace. Enter Mike Milligan, who as played by Bokeem Woodbine appears to be this season’s Lorne Malvo. He’s far more laconic than his Loki/Joker trickster-god mayhem-machine of a predecessor, however, concealing his obvious lethal potential under a laconic All-American surface. “If you’ve got a complaint—that’s my motto—put it in writing,” he genially informs the typewriter salesman from the premiere as he feeds the man’s necktie into one of his own machines. After a too-slow recon drive past the Waffle Hut where Rye Gerhardt was last seen perpetrating a massacre before disappearing puts him on the radar of Lou Solverson, he faces down the lawman’s father-in-law, Sheriff Hank Larsson, with similarly studied faux good cheer, assuring him “I am, if nothing else, a man of my word.”

I sense there’s a story behind Milligan’s demeanor. So far, the nature of the Kansas City outfit he serves is unclear. Historically that’s the mafia’s Midwestern stronghold, but Mike’s apparent boss, Brad Garrett’s all-business Joe Bulo, drops Yiddish slang as they ride from their meeting with the Gerhardts, so Italians have yet to be in evidence. Either way, it’s rare to see black men afforded entry into the upper echelons of white crime organizations, so perhaps his anchorman accent and eerie calm are affectations necessitated by the prejudices of his partners. There’s just a hint of this at the end of his encounter with Hank: Milligan marvels at the “miracle” of two men on a lonely highway coming to an understanding through conversation, “when all around them”—and here the accent slips just a bit—“people are losin’ their mind.” You don’t have to look any farther afield than Ed and Peggy Blomquist, who spend the episode powering through a murder cover-up that involves disposing of Rye’s body in a butcher-shop meat grinder, for evidence of that.

Hank, for one, thinks the insanity is an overseas import. After their long, tense day of investigation—which writer/director Hawley played as if death and disaster were never more than a misstep away—he and Lou commiserate over how police work triggers their memories of combat from World War II and Vietnam respectively. Noting the uptick in homicides since the ‘70s started, a regretful Hank, played by Ted Danson at his most hang-dog handsome, tells his son-in-law “I sometimes wonder if you boys didn’t bring that war home with ya.” Thanks to another unidentified flying object at the end of the episode, this one accompanied by the opening narration from H.G. Wells’ War of the Worlds, war remains in the air till the end.

In other words, Fargo connects everyday atrocities to world-historical ones, simply by noting their near-identical effects on the individuals involved with either. This is how it dodges the potential pitfall of pretentiousness. And this is what makes comparisons to Game of Thrones—a great show about the inherent immorality of violence and power structures that rely on it—more apt than comparisons to True Detective—a mediocre show about provincial crime bosses with overinflated self-importance and overheated vocabularies—despite the similarity of their stories. True D Season Two never quite connected the dots between its shopworn dirty-cop and gangster archetypes, its slow-burn ominous atmosphere, and its shoot-em-up setpieces. Nor did it have half the performances Fargo Season Two has given us already; what sounds ridiculous coming out of the mouths of Vince Vaughn or Colin Farrell takes on the weight of Cormac McCarthy or Flannery O’Connor from Smart, Woodbine, or Danson. They feel like actors who’ve inhabited their characters rather than wearing them like costumes, just like the show’s grandiose and dramatic pronunciations about monarchs and madness seem to emerge from careful character study rather than late-night Nietzche binges. That’s how you build an empire: one body at a time. 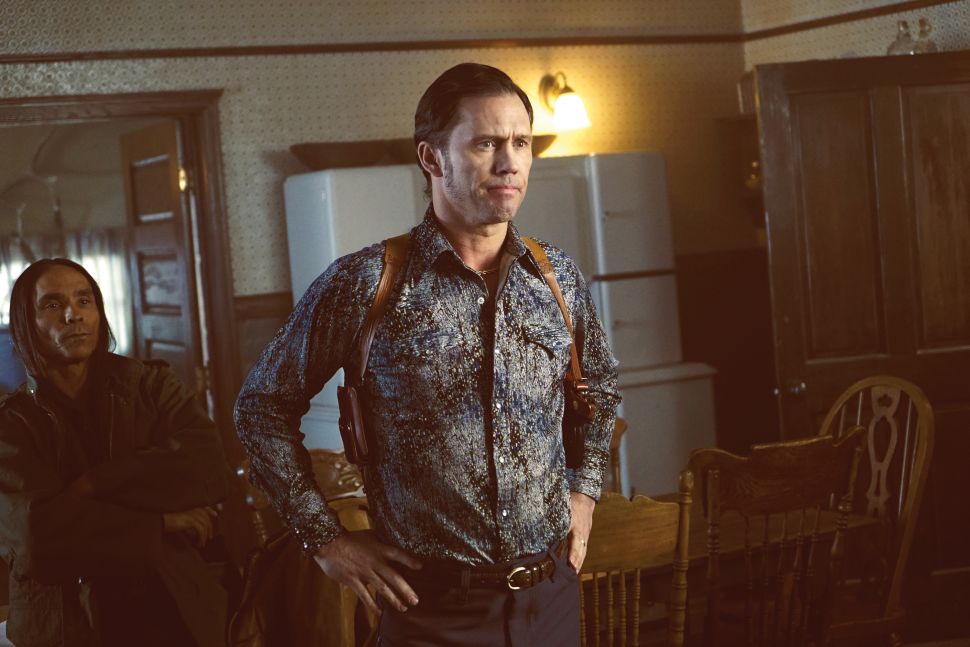