How did they ever make a TV show of Fargo? The answer: Quite well indeed, surprisingly. At first, second, and even third glance, novelist Noah Hawley’s attempt to translate Joel & Ethan Coen’s Oscar-nominated Minnesota murder-comedy into an anthology series seemed like a frozen folly to rival Seward’s, no matter what the smash Season One success of Nic Pizzolatto’s True Detective augured for another author-helmed cable crime series with a fresh cast and story ever season. Even if Fargo wasn’t a straightforward adaptation/expansion of the original, the unique Coen Brothers blend of small-town dorkiness, splatstick comedy, and unsparing despair could perhaps be imitated, but never duplicated, no?

Oh, yeah. Hawley wisely took the Rumsfeldian approach to the seemingly impossible task, solving the problem by making it bigger. Yes, his all-new story borrowed all the familiar elements from the original: the snowy setting, the North Central accents, the pregnant policewoman, the milquetoast murderer, the Mutt-and-Jeff hitmen, the escalating calamities, even little details like an awkward reunion over dinner, a chase over thin ice, and (in the show’s one true link to the movie) a hidden suitcase of loot marked with an ice scraper. But it also made a magpie-like raid on the Coens’ entire oeuvre: a hotel corridor from Barton Fink here, a parable-dispensing rabbi from A Serious Man there, and, in the form of Billy Bob Thornton’s hellaciously awful contract killer Lorne Malvo, a living embodiment of predatory evil out of No Country for Old Men everywhere. (Even composer Jeff Russo’s extraordinary score paid homage to a variety of Carter Burwell’s Coen-movie musical contributions.) The result was less a riff on the Brothers’ 1996 classic and more “Songs in the Key of Coen”—a tribute to the writer-directors’ unflagging ability to playfully puncture the thin ice of human decency and find the deadly cold beneath that may well have surpassed the original.*

All of which makes the show’s Emmy Award–winning first season (technically miniseries, but only the network and the Academy care) a tough act to follow. Not only does the show have to maintain that level of care and quality, it must do so with no Billy Bob, no Bilbo Baggins, and no out-of-nowhere star turn from Allison Tolman as an underappreciated master investigator with a bun in the oven. The sad fate that can befall an anthology series’ sophomore season is as plain as the mustache on Ray Velcoro’s face.

Fortunately, “Waiting for Dutch,” Fargo’s Season Two premiere, is no Redux Detective. That’s apparent from the opening sequence, which gives the episode its title: an “Indian chief” actor and his mustachioed director, shot in glorious black and white, standing around waiting for the star of the picture, Ronald “Dutch” Reagan, to show up so that their movie Massacre at Sioux Falls can begin shooting. The segment, which begins with an old-school MGM lion roar and bleeds into a ‘70s-style split-screen montage that mixes members of the show’s new crew of gangsters, the Gerhardts, with figures from the real-world turmoil of the time ranging from Jimmy Carter to Jim Jones, with Ted Bundy and John Wayne Gacy riding shotgun. It’s remarkably gutsy filmmaking, given that there’s zero precedent for its high artifice whatsoever in the show’s first season. The message is clear: Fargo 2.0 is ready to strike out on its own.

It took me a shamefacedly long time to realize that the film-within-the-show is a reference to where this season is likely headed. Set in 1979, the episode stars Patrick Wilson as  Lou Solverson, who as played by Keith Carradine was the father of Tolman’s good cop Molly Solverson back in Season One. (Here she’s a cute little kid who loves reading books on her dad’s lap.) It seems as though Lou’s oblique references to a bad bit of business that went down in Sioux Falls, with bodies stacked two stories high, are about to get a whole lot less oblique.

And we already have a few potential suspects in the future Sioux Falls slaughter. On one hand, there’s the Gerhardt gang, ruled with “the iron fist of God” by patriarch Otto Gerhardt (Battlestar Galactica badass Michael Hogan)—at least until he’s sidelined by a stroke, perhaps permanently, leaving his apparently equally tough wife Floyd (Frasier’s Jean Smart). On the other, there’s the Kansas City syndicate, though it appears to be more multiethnic than its real-world mafia analogue. This outfit is embodied by Everybody Loves Raymond’s Brad Garrett as a middle manager who pitches expansion into the Gerhardts’ territory to his unseen boss like it’s a run-of-the-mill business merger supported by “the boys in Research.” The glimpses we caught of the wider crime world in the first season were tantalizing; a full-fledged organized-crime story could be mesmerizing.

It certainly starts out that way, thanks to the hour’s strongest scene: a waffle-house massacre perpetrated by Rye, the runt of the Gerhardt litter. Kieran Culkin is exquisitely cast as a weaselly ne’er-do-well who, in service of a get-rich-quick scheme involving electric typewriters (!), attempts to muscle a judge while she drinks her coffee, only for her to douse him in the eyes with bug spray, at which point the bullets start flying. Half-blind and literally stabbed in the back, this asshole staggers out of the restaurant to track down and gun down a winged waitress who managed to get away. Then a UFO appears. Then he gets hit by a car and lodged in its windshield. Then the car drives away with him as a human hood ornament. Hopefully those last three sentences, particularly, you know, the one about the UFO, indicate just how rapidly and radically Fargo is willing to escalate its mayhem, to literally paranormal levels. This has always been a key ingredient in the Coens’ recipe for black comedy, but it also makes the point that given the opportunity, people and events alike really can go this fucking wrong. It’s like the Old Testament for an atheistic age, and Hawley stays true to the scripture.

The one cog in the murder machine that gives cause for concern is Kirsten Dunst’s chirpily unscrupulous Peggy Blumquist, the woman with the misfortune of having ended Rye’s crime spree by running him over. This, in itself, ain’t that bad. Driving home with a dead body embedded in your windshield is totally the kind of thing a terrified person who believes they just killed an innocent man might do, so that’s fair enough, as is her psychologically overcompensating happy-homemaker routine upon the return home of her genial butcher husband Ed. (Just how genial he’ll remain is an open question, given the casting of Jesse Plemons, aka Todd Alquist, aka the single worst person on Breaking Bad.)

But something in the way she moves to cover up the crime after Rye revives, attacks Ed, and get stabbed to death with a gardening shovel doesn’t sit right, especially when combined with our discovery that she’s freezing ol’ Ed out in the bedroom. As a great man once said, this whole thing smacks of gender. Season One began with a similarly unsympathetic Bad Wife character, but Pearl Nygaard, like overgrown bully Sam Hess and peerless psycho Lorne Malvo, was essentially a a means to an end, a device designed to set her husband Lester on the road to moral ruin. (Many shitty writers flatter their main characters and anyone in the audience who relates to them alike by making everyone they meet complete assholes; the Coens, and Hawley, have the courage to avoid the comforts of kitsch by making their Job-like protagonists real schmucks too.) It’s possible that her actions in that garage feel false only because we know the police would be unlikely to throw the book at her for turning a triple murderer into roadkill. But if Peggy stays in the spotlight, we’re gonna need more out of her than “beautiful blonde who leaves husband with blue balls and bloody hands” to steer clear of the thin ice of sexist stereotypes.

But unlike the characters, we have every reason to be optimistic. Peggy aside, this was a surefooted hour of television, more in control of itself the more out of control things got, with a splendid Circus of the Stars–style cast of TV veterans—seriously, we haven’t even mentioned Ted Danson, Nick Offerman, or the dude from Burn Notice. If this Midwestern morality play’s second act is anywhere near as good as its first, aw jeez, that would be just terrific, sure.

*For what it’s worth, the top five Coen Brothers movies, in ascending order: 5. No Country for Old Men 4. Inside Llewyn Davis 3. A Serious Man 2. The Big Lebowski 1. Barton Fink 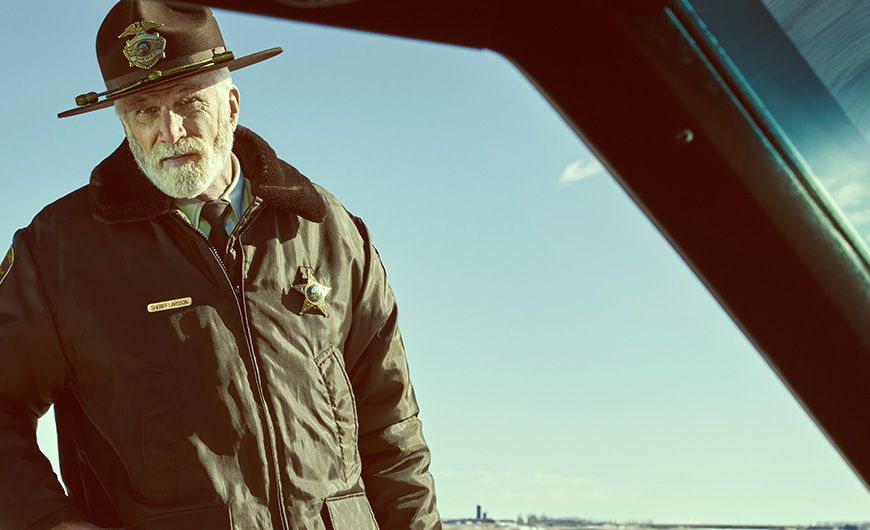