Throughout history, historians have always viewed textiles within their economic context rather than their place in fashion. However, the Metropolitan Museum of Art’s latest exhibit “Fashion and Virtue,” does just that. It takes the seemingly simplistic development of textile pattern books in the 1520s and charts their progress in influencing the way fashion is disseminated to this day.

Situated in the museum’s Robert Lehman Wing, the airy, glass-roofed atrium at the back of the museum, “Fashion and Virtue” takes a multi-faceted approach to exhibition display. Using textiles, paintings, textile books, printing blocks and fashion, the curator, Femke Speelberg, who works in the museum’s Department of Drawing and Prints, created a comprehensive look at the development and effect of Renaissance textile books. “It’s a very interdisciplinary show,” explained Ms. Speelberg.

The first printed source of textile patterns in the Renaissance come from a series of six intricate, interlaced roundel prints by Leonardo da Vinci, produced in 1490s in Milan, with each successive roundel becoming increasingly more complex than the previous one. The print master, Albrecht Dürer, was not one to copy another’s work. But after da Vinci’s death in 1519, Dürer became so fascinated by da Vinci’s printed knotwork roundels, that he created woodcuts of them. These knotwork prints became the first to be published as a series, inducing readers to to continue to develop and create more intricate patterns. This lay the groundwork for the pattern books that soon spread like wildfire and became runaway Renaissance hits.

The first textile book was published in the Augsburg print shop of Johann Schönsperger the Younger, a publisher who pioneered the market for these books, using it as way to experiment with typography in addition to textile design. Marketed toward women, who, because of the guild system, were barred from work, it used ideas of “virtuous industriousness,” in order to induce women to enjoy the books anyway. Virtuousness was seen as the holy grail of female qualities at the time.

Unlike in other books of the day, textile book publishers communicated directly to their readers. In the mode of the modern-day “editor’s letter”.  The publisher would address reader problems and concerns with the patterns in previous issues, underscoring the books’ customer service approach.

The books were produced quarterly, and they were, in a sense, the first fashion magazines –  publications devoted to promoting and publishing the latest trends. As Ms. Speelberg explains, “It was really how the genre started.” As you walk through the exhibit, the analogy continues to reverberate and is taken further: just as fashion magazines serve as a source for inspiration, with pages cut out and posted onto what we call a “mood board,” so too were Renaissance pattern books. Which is why textile books from this time period are so rare and hard to find.

The highlight of the show is the final portion, where Ms. Speelberg found traditional costumes and clothes that reflect the Renaissance design sensibilities. Through an array of clothes and shoes and accessories designed throughout the 20th century, Ms. Speelberg proposes that textile designs developed during the Renaissance continue to be a part of the fashion system.

And if you have difficulty seeing the similarities between the Renaissance designs and the various clothes and accessories, the exhibit helpfully has a wall panel “textile book” printed with various design motifs found in the garments. One particularly beautiful dress, an ethnic Russian costume in shades of red, blue and white from the early 20th century, which was directly inspired by Renaissance textile books, is covered in intricate embroidered patterns with geometric shapes abundantly persistent.

Another piece of note is a pair of Stephen Dweck earrings, featuring a hooped, deep red carnelian gemstone topped with a bronze knot design. Although the origin of Mr. Dweck’s inspiration for this looped motif is attributed to Asian sources, the bronze design has an uncanny resemblance to the design that started it all: the knotwork prints by da Vinci. The never-ending, almost-snakelike bronze ornament feels like a testament to continuity, an unbroken transmission of ideas that have influenced the progression of styles and design over the course of hundreds of years. 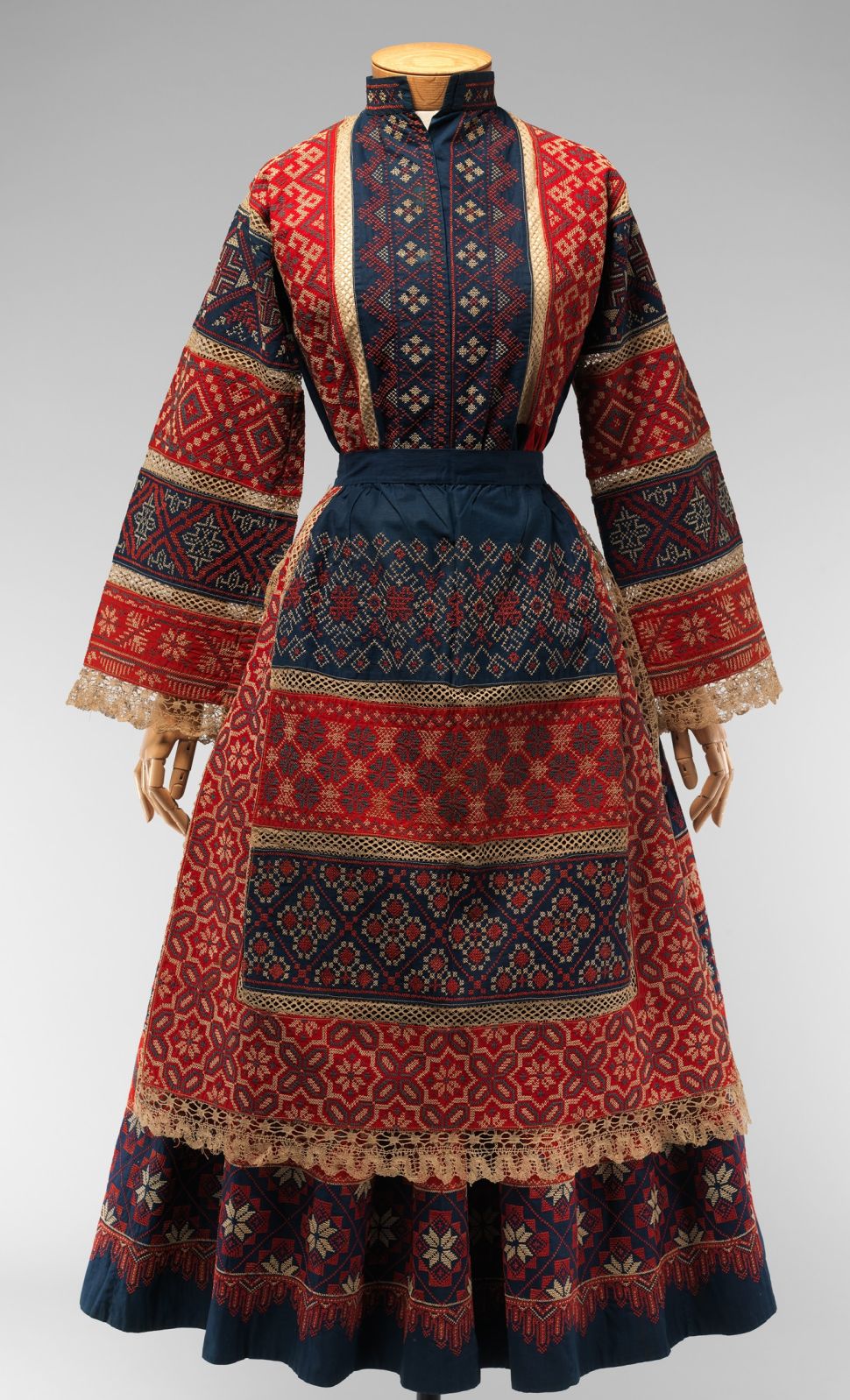