I couldn’t wait for the new (fifth) season of Homeland and the new (second) season of The Affair. But when both debuted on Sunday night, October 4, on Showtime at, respectively, 9 and 10 p.m., two things were missing. One was skewedly brilliant, bipolar Carrie (Claire Danes), with her pop-off argumentativeness and miserable decision-making (like, um, screwing a teenager to get jihadi secrets). The other was depressed, soulful Alison (Ruth Wilson), with her radiation of distrust and irony about all things, large and trivial. Instead, the debut episodes made these quirky women semi-formulaic: There was Carrie as a cheerful, Park Slope-worthy toddler’s mom, earnestly weighing parenting vs. work issues. (Where was the terrorist-fighter who ignored her own pregnancy? Who dumped her baby on relatives?) And there was Alison as the gourmet-meal-making Muse of the Great Author at their Hudson River-side “shack,” waxing shrinkified and evolved. (“Want to tell me about [your bad day]?’’ this introversion-averse, drug-couriering townie—her son’s death lodged like a never-spoken-of bullet of guilt in her stomach—helpfully asked her paramour Noah.)

Fortunately, the following week’s episodes did some course-correcting. Carrie—although not before telling her German boyfriend, “I can’t tell you how much it means that you’re looking after [my daughter],” and signaling apology for her former gruff self—did go back to her dangerous work in the souks, head scarf and passion intact. And Alison stumbled around her new environs, masochistically flirting with the she is—whether from lack of skill or phobia—unable to swim in and which killed her son, and confronting the Class Divide (which is the staunch heart of the series) like a wary intruder with a secret. However, first came a sub-Bachelor wake-up scene in which Alison purred, “You’re the best thing that’s ever happened to me,” after Noah purred, “Morning, sleepyhead.” Really?

TV drama already has enough heroines who land on their feet—and whose feet are visible. Some have so earned their grave toughness the hard way, we don’t care that they’re virtuous—like my favorite, Olivia Benson (Mariska Hargitay) of the venerable SVU. But others are the new good girls in bad-girl drag, like the other Olivia, Olivia Pope (Scandal’s Kerry Washington), who, though she may have helped steal an election, never lost her daunting Spence enunciation—or the puppy-dog adoration of the president, and we’re ever-reminded of both her selflessness and her PR brilliance as she constantly orders him, for the sake of his presidency, to reunite with the wife he lavishly despises.

Virginia Johnson (Lizzy Caplan), on Masters of Sex, is supposed to be a “bad mother” because her daughter keeps saying she is and because she’s a downscale divorcee who back-doored into snooty academia and is a sex specialist in the age of repression. But her feminist preachiness to clueless Masters and her unctuously elegant voice give her away as a winner in every episode. Annalise Keating (current Emmy winner Viola Davis) in How To Get Away With Murder may plot murders, cover up murders, frame her boyfriend for murder and get all vulnerable at midnight (sans wig and makeup) but not for a minute is she not ruling over her cute cabal of law-student acolytes. As for The Americans’ Elizabeth Jennings (Keri Russell)—sure, she’ll shut up a stranger in a phone booth and poison a wistful old widow, but she’s always home to put dinner on the table. In our age of heavily patrolled resurgent feminism, the baddest-assed girls have to be Lean In exemplars: in control, herculeanly multi-tasking, and serving some higher morality (whether orgasms or Communism) underneath their shenanigans. No show runner seems to want the fate that befell Gone Girl, of which p.c. critics complained that it was troubling that a female protagonist lied about her rape.

I long for those not in control and whose higher morality is muddy: the ones who lash out or stew unproductively, whose idiosyncrasies set them up for defeat, who are amoral in ways that don’t 180-degree turn into triumph. These vulnerable women are huge relief in our age of perfect-mother expectation and women’s empowerment conferences, and I’m not the only female writer who thinks we must preserve their endangered raggediness. Author and writing professor Emily Black, a huge Carrie fan, says, “Carrie is a mess, which makes her real. She’s needy, has bad habits, loves too hard. She’s also ridiculously good at her job, which makes her morally and ethically compromised. She’s sexy, obsessive, imperfect, haunted.” It’s “the kind of complexity usually reserved for male characters,” Ms. Black notes.

Of Alison, magazine journalist Lisa DePaulo says, “Who hasn’t been the fucked-up waitress at some point in her life? We love Alison for the same reasons we always loved Bill Clinton: you know she had a tough life, so of course she’s a hot mess, but in a good way.”

Novelist Caroline Leavitt (Is This Tomorrow) loves “relatable” Carrie because she’s “neurotic, screwed-up, fierce—and accomplishes things because of it. I’m so fed up with people saying female characters have to be ‘likable.’ ” Anita Hughes (Rome in Love) sensed that Alison’s feeling of “torture” over the death of her son “made her so almost numb, she felt exempt from the moral code” and thus broke up father-of-four Noah’s marriage. “Louche and depressive,” is how editor/writer Elisa Petrini sums up Alison. I would add: That’s girl-crush catnip to women.

These women are familiar in the subtlest way: you get the blurry connection to significant females in your own life only after you’ve been pulled into their web. I went to grade school with a Carrie, a ridiculed, brilliant, “difficult” girl whom I hope is now a medicated astrophysicist. Alison is my high school best friend Jamie and also my college best friend Jean, two very different man-magnets: limpid-pool-eyed (the former) and very generous-mouthed (the latter); confidently unskinny; wielding the upper hand via silences that projected mischief and judgment.

Messy heroines can even be inspiring, and as prelude to this point, I’d like to go back to the Character Zero of messy heroines: Weeds’ Nancy Botwin (played by Mary-Louise Parker, between 2005 and 2012). Was there ever a more deliciously amoral anti-heroine? A mundane Calabasas-ish young widow—with the flattest affect, the most perverse mind and a power over men far beyond her unexceptional prettiness. Loudly slurping her take-out beverage, she spun a web of criminality, making everyone she knew, including her two sons, her co-culprits, while she stayed blasé. I knew a version of Nancy Botwin (for decades, actually)—we all did: the upper-middle-class “normal” girl who got away with everything.  Joanna Rakoff not only knew Nancys, but Nancy greatly influenced her. Ms. Rakoff “ripped apart” and rewrote her heralded 2009 novel A Fortunate Age because “Nancy Botwin taught me to make huge, bold choices for my characters, to [have them] take action rather than dwelling in their heads.” More significantly, years later, when Rakoff “cracked my life open” via divorce, “it was Nancy of whom I thought; it was Nancy who showed me”—through reruns of Weeds on sleepless nights—“not to worry what anyone thought.”

These women are familiar in the subtlest way: you get the blurry connection to significant females in your own life only after you’ve been pulled into their web.

Novelist Joyce Hackett (Disturbance of the Inner Ear) thinks the secret of our loving Carrie and Alison is that “America invalidates any woman with flaws—and that is to say, almost every woman—as an unreliable narrator. These shows lure us in with that premise, and then”—through the compelling nature of the characters’ odd specificity—“turn that premise on its head.” Says Syd Sidner, who has sold two network pilots and taught TV writing at Columbia and NYU, “The more female characters that are written with varying degrees of fallibility, the better. The more ways we are allowed to be seen as complicated, struggling people, the better.”

After episodes two, I wanted to say to the writers of Homeland and The Affair who I thought may have been tempted to normalize Carrie and Alison: American women are proving we can be winners. Now, be cool enough to show that we can also be losers, at least in some regards. The third episodes of both shows, on October 18, proved that the writers were getting it: Carrie has gone off her meds in order to do her best work and is flagrantly breaking down: gin-guzzling, hallucinatory guilt over her drone murders, shotgun-in-hand and all. And Alison is confronted by Noah’s teenage daughter, who calls her a low-class slut, and she is so caught in a web of self-deprecation, secret hoarding, and vulnerability, especially around her and Noah’s estate-owning landlords, who, noblesse-obligely, befriend her, that her chances of remaining Cinderella have shrunk to nil. Alison is haunted—and haunting. Carrie is haunted—and haunting. Their risks are probably not going to pan out, and they know it and we know they know it.

And maybe everyone’s knowing it is, in this age of patronizingly inflated you-go-girl! optimism, is the best old-fashioned life lesson after all. 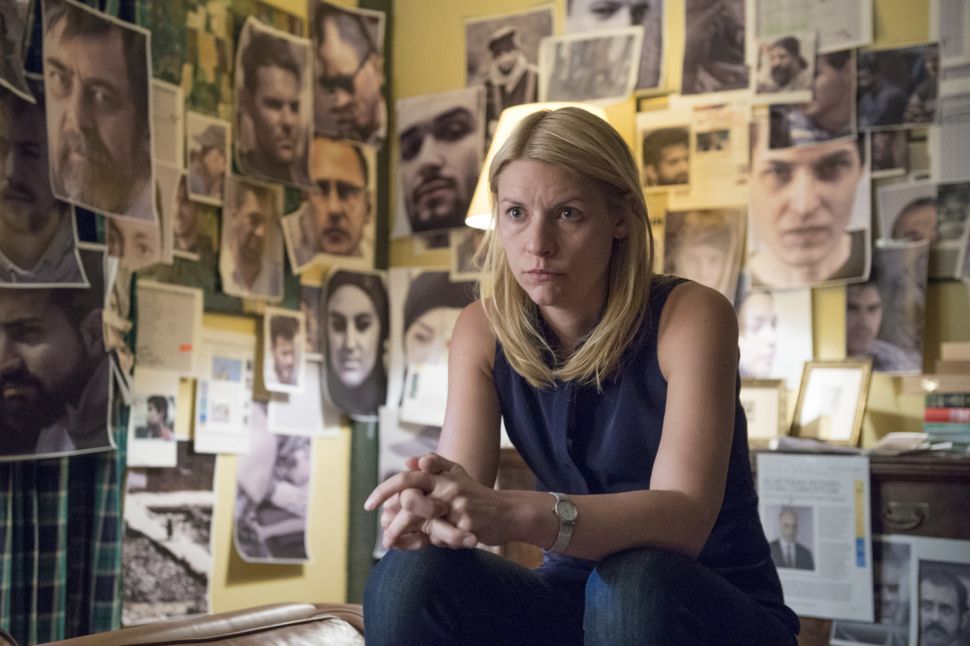