Gotham is a show that loves to tout how insane, bananas, cuhraaaaazy its antagonists are. It’s basically the series’ selling point. But consider this season’s subtitle: Rise of the Villains. Gotham‘s entire premise is that these new, outlandish villains are arriving in Gotham City. The old model of crime doesn’t work here anymore, Gotham tells us. Gone are the days when you simply got mugged. Now the dude mugging you is dressed like a clown, and his partner is probably going to eat your girlfriend. But they’re not the insane ones. You are. Last night’s Gotham, titled The Last Laugh, showed us the only insane people left in Gotham aren’t the ones trying to tear the city down, it’s the ones who still think the city is worth saving.

Honestly, who in their right mind still RSVPs “yes” to any benefit in Gotham City? I wouldn’t even say no. I’d burn the invitation with a blowtorch and have a priest exorcise the ashes. This goes double for any event that advertises a performance. History has shown us that nine times out of ten the scheduled performer is going to be hogtied and locked in trunk, while someone way more evil takes their place. If there’s a live band, you can basically guarantee that the guitars are also machine guns. I don’t care if it’s the Gotham Free Puppies Luncheon. The puppies are probably bombs, somehow. Bombs filled with poisonous gas.

Case in point: Much of The Last Laugh takes place at the Gotham Children Gala. “What could go wrong at a children’s gala?” some rich Gotham City asshole definitely said, repeating an action while expecting a different result. “What could go wrong” turns out to be Jerome Valeska, fresh off murdering his blind father (see ya, Mark Margolis!), impersonating the gala’s much hyped magician, Barbara along as his assistant. I love that Gotham is one of those places that only exists on TV, where everyone accepts any excuse, as long as that excuse is whimsically appropriate to the person giving them. Like, “Oh, you know…magic!” is a perfectly acceptable reason for a sketchy bearded man to show up out of the blue to replace your scheduled talent, as long as that sketchy bearded man is also dressed like a magician.

So I guess the big news is that everyone’s favorite baby-Joker is…not the Joker. No, he’s just dead, courtesy of a knife to the throat from Theo Galavan. Episode writer John Stephens definitely gave Cameron Monaghan a showcase to go out on, with the benefit taking up about three-quarters of the episode and most of it centered firmly on Monaghan’s performance as Jerome. And hey, with the inclusion of little Bruce Wayne, the Gotham team got to write their Batman vs. Joker showdown that you know they were pissed they couldn’t, without actually doing so. Unfortunately, they couldn’t have anticipated that the true stand-out performance would come from the random, female voice that shouted “WHO IS THE GOOSE?” after Jerome-as-magician played duck-duck-goose with the crowd. Seriously, go back and listen for it. Whoever decided it was a good idea to add that line in is a damn saint.

Before I get into Jerome’s death (and why it worked so well) and who I think Theo Galavan is (seriously I’m like 90 percent sure at this point), can I point out how great Galavan’s plan is? Like I said, the criminals in Gotham like Jerome aren’t crazy, they’re just…overly enthusiastic, and therefore easy to manipulate. No, it’s these people who put on their suits and dresses every day and expect to not get shot in the head with a penguin-themed gun that are crazy. They’re crazy because they’re as blind as Jerome’s father to what’s happening. Arkham shouldn’t be for the criminally unstable, it should be for the criminally optimistic that Gotham isn’t the worst place in the world to live. All Theo Galavan is doing is reassuring them that a hero has arrived, and maybe their optimism isn’t misplaced after all.

Which, of course, is just insane.

As always, let’s run down every reference, fact and nugget of Bat-history brought up in Season 2, episode three, The Last Laugh. 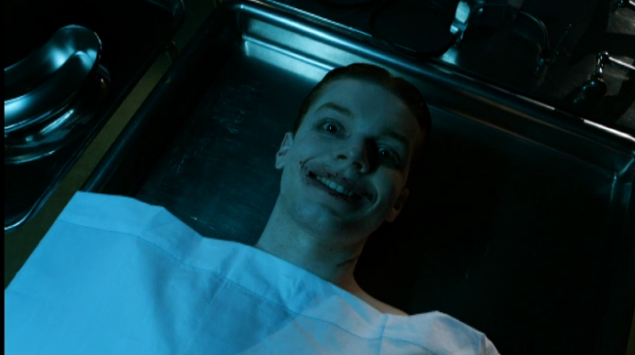 Despite the fact he is a snake-worshiping wizard, I often write about Alan Moore here because that dude knew how to write a serious comic book back in the day. Probably most quoted here in the Gotham Reference Guides is Moore’s Killing Joke, one of the best known Batman and Joker stories ever written. Half of it is an “origin story” for the Joker, but the other half works to establish that there will never be an origin story for the Joker. Even though I eventually grew fond of Cameron Monaghan’s manic, patchwork Joker impression, it never sat right with me that Gotham felt it needed to provide this origin. Because giving the Joker an origin is also stripping away the entire point of the Joker.

“But the entire point is he dresses like a clown!” you’re probably yelling. And you’d be right, if this was 1945, and every comic book character was defined by the color of their spandex pants. But as comic books became smarter over the years, writers and artists started to see the Joker not as a dude dressed like a clown, but as a stand-in for Gotham City itself. Didn’t you ever wonder why Batman’s arch-nemesis wears makeup and lipstick? Is the opposite of bat…clown?

It’s because Batman is never actually fighting individual crime, he’s fighting Gotham City. He’s fighting the very fact that no amount of punches to the face will get rid of the deep-seated roots of corruption that took hold in the city far before Bruce Wayne was even born. Gotham is a pure symbol inverted into something much darker, a city that from afar looks like the height of success, but at its core is twisted so tightly it’ll never uncoil.

The Joker is Gotham City, because there’s no saving him. There’s no logic there, there’s no reasoning, he just is. You know why Two-Face is Two-Face. You know why the Penguin is the Penguin, and why Mr. Freeze is Mr. Freeze. But the Joker just appeared, maybe as old as Gotham City itself, and he’s unchangeable in every way except for his smile. And you have no idea why the Joker is the Joker, and that is what is terrifying. “If I’m going to have a past, I prefer it to be multiple choice,” the Joker says to Jim Gordon in The Killing Joke. Gotham, not usually the series best known for showing good judgement in presenting origin stories, finally got one right.

I’ve said before that Theo Galavan is totally Ra’s al Ghul. Well, like the Gotham writers who want us to forget that Harvey Bullock once actually tried to kill Jim, I have changed my mind. You see, this episode Theo says to Barbara:

“Did you know my family built this city? We carved the bedrock on which it stands. And there is not a bridge, an alley or ditch that carries our name. My forefathers were betrayed, their legacy erased, and I am here to punish those who wronged us and reclaim what is ours.”

This speech calls to mind Batman: Gates of Gotham, a five-part miniseries from 2012 by Scott Snyder and Kyle Higgins. In it, a man calling himself the Architect bombs the three major bridges, each named for a different “founding father” of Gotham: Alan Wayne (related to Bruce Wayne), Theodore Cobblepot (related to Oswald Cobblepot) and Edward Elliot (related to that kid Bruce beat the shit out of last season on Gotham).

Turns out, the Architect is actually Zachary Gate, a descendant of one Nicholas Gate. Nicholas and his stepbrother Bradley were architects, overseeing the creation of the three bridges. Eventually, as these things usually go, Nicholas lost his mind (in a homicidal, straight-to-Arkham way), fueled by his thought that the founding fathers were lining their pockets off of the works he built.

What I’m trying to say here is, if Theo Galavan isn’t actually Zachary Gate, he’s totally a descendant of Nicholas Gate. And the Gate family is usually pretty pissed that “not a bridge, an alley or ditch” bears their name.

O.K., a little bit of a stretch. But, in Gates of Gotham, the Architect also targets a fourth bridge, named for another powerful Gotham family the Gates had a problem with: the Kane family. The name of the only person killed in Theo Galavan’s plan last night other than Jerome? Harrison Kane. 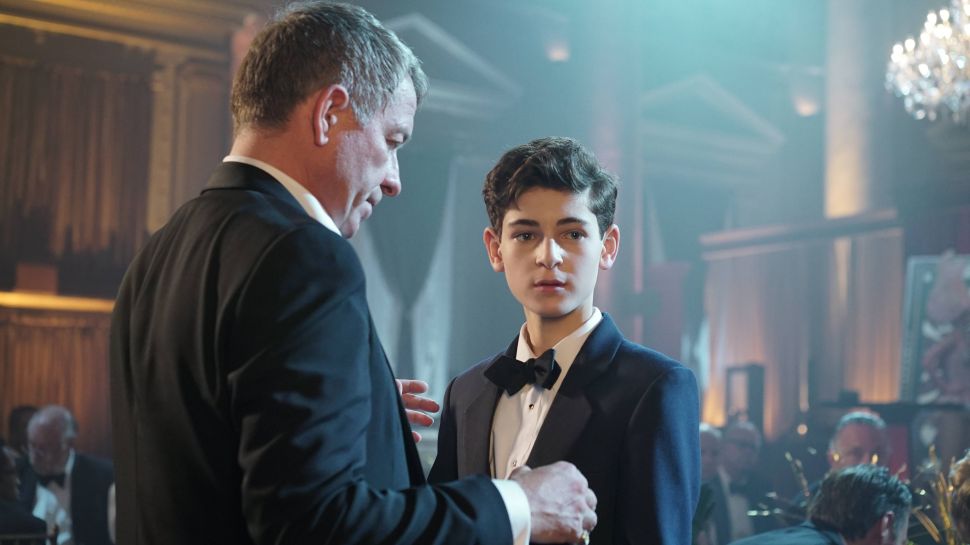