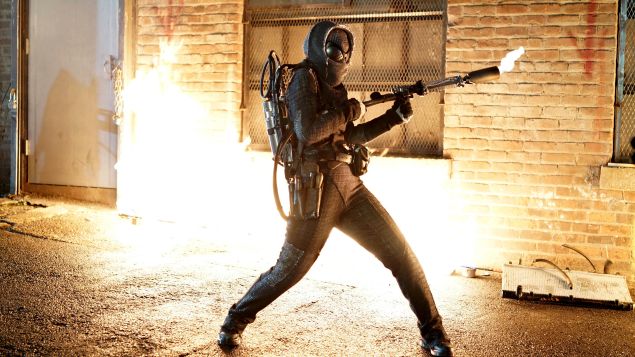 After an episode that took itself way too seriously, Gotham recovered this week in fine form. “Sorry, sorry, our bad,” it seemed to say. “Please, allow us to blow up this dude with dynamite in his pants.”

Apology accepted, you weird little slice of television, you.

In fact, there was a whole lot of explosions in ‘Scarification,’ but that was no surprise thanks to the introduction of everyone’s favorite pyrotechnic Firefly (more on him…excuse me, her in a moment). I love that the show gave Selina Kyle a partner/trainee of sorts in Bridgit Pike. Selina was a character that desperately needed any sort of direction, and having a young, female villain-esque companion is promising. There’s only so long I can watch her slap Bruce Wayne’s pre-pubescent feelings in the face, but then look at him from afar because she’s conflicted.

The best part? No one compared her to a fucking cat. Not once. See, Gotham? It is in fact possible for Selina Kyle to be on screen and not have her, I don’t know, lapping up a bottle of milk and purring for no reason.

Elsewhere Oswald Cobblepot, head of all crime in Gotham City, is a far better detective than every single detective in Gotham City. Let me guide you through Penguin’s arduous  to discover Galavan’s secret, nefarious family lineage.

Oswald: If only I could find out Theo Galavan’s weakness, which no one in this city knows!

Butch: Why don’t you talk to that old lady? The one that like, knows all that stuff about Gotham or whatever. Edwige?

Butch: I’m not sure, Fox’s advance copies of Gotham don’t have a closed captioning option. I’m 95% on Edwige, though.

Nevertheless, Oswald does go to…Edwige and learns, uh, everything. Every single thing, including Theo’s family history, original last name (Dumas), his reason for being in Gotham, etc etc. No one else in the city knows this. Everyone, from the former mayor to two separate police commissioners to Jim Gordon, is acting like “wherever did this handsome billionaire come from?” And this old lady in a pawnshop responds “yeah, here’s the entire Wikipedia page on the Galavan family. There’s charts and everything.”

I really do understand why this season is subtitled ‘Rise of the Villains,’ because outside the Firefly and Penguin plots, our Gotham good guys are doing absolutely nothing. Yes, I’m including their raid on The Merc. How in the world has a Costco for explosives and gasoline not already been raided? That place is ‘probable cause’ on steroids. Outside of that, Jim and Co. did nothing of consequence. The double date between Jim, Leslie, Eddie and Kristen Kringle established nothing other than the fact Kristen was the most mentally unstable person in the room, and fondue is not okay in any situation.

But honestly, any dullness was outweighed by the scene in which Oswald gets Butch drunk then chops off his hand, if only for two reasons: 1) Robin Lord Taylor’s genuinely insane line reading of ‘OH, AM I? AM I GOING MAD?” and 2) Drew Powell’s screech when Oswald cut off Butch’s arm. My stars, the pipes on that man. Is Gotham cross-promoting FOX’s new X-Men show by turning Butch into Banshee?

As always, let’s run down every reference, fact, and nugget of Bat-history brought up the season 2, episode five: ‘Scarification’

THE ORDER OF ST. DUMAS 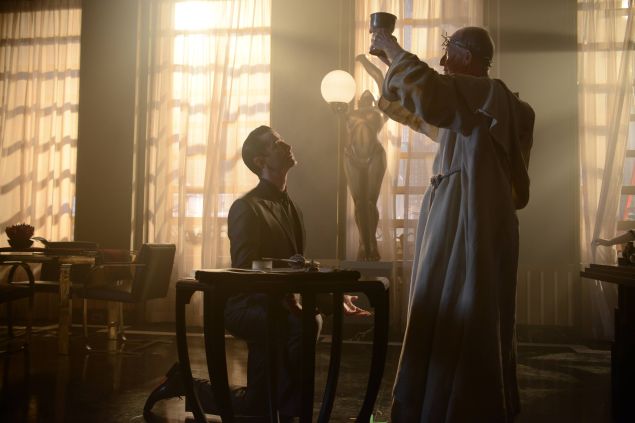 So thanks to human-Gotham-encyclopedia Edwige, we get the full scoop on Theo Galavan’s past. Turns out he’s actually a member of the Dumas family, one of five high-society clans of yester-year Gotham City along with the Waynes, Elliots, Kanes and the Crowns. Theo’s relative Caleb Dumas, that old scamp, had some weird Victorian era boner for Celestine Wayne. Unfortunately, Celestine Wayne was promised to the oldest Elliott boy, and the result of all that messiness was Caleb losing an arm, and the Wayne family erasing the Dumas from Gotham history (this isn’t the exact story of Batman: Gates of Gotham by the way, but it’s not THAT far off, either).

Anywho, Caleb and his one-armed, possibly rapist self fled to a religious sect named for his family’s patron saint. Using some context clues, that religious sect would be the Sacred Order of Saint Dumas.

In the comics, The Order of Saint Dumas is an off-shoot of the Knights Templars. A group of warrior-monks (my personal favorite oxymoron) eventually had a falling out with the Knights Templar during the Crusades, and decided to start their own little sect, named after their leader Dumas. There’s a whole lot of complicated history and world-building here (that if you’re that interested in, pick up Dennis O’Neil and Joe Quesada’s Batman: Sword of Azrael 1-4). Long story short, an off-shoot of The Order of Saint Dumas (which itself was already an off-shoot) started producing superhuman champions called Azraels. The most recent Azrael, John Paul Valley, took over for Bruce Wayne as Batman after Bane broke the ever-loving Bat out of Bruce’s spine. This went well, until JPV decided Bruce Wayne’s no-killing-criminals rule was, to paraphrase, “dumb.”

BUT, back to Gotham. We have Theo Galavan (who isn’t Ra’as al Ghul or Zachary Gate), an apparent member of the Order of St. Dumas. Does this make him an Azrael? Or just a dude who is mad at a 13-year-old boy for having the last name Wayne? Time will tell!

As for that hooded man, Father Creel, that showed up at the end there? Uh….no idea. Maybe he’s Ra’as al Ghul? Or the original Dumas? Or, I don’t know, maybe it’s Emperor Palpatine from Star Wars. And that name totally isn’t just on my mind because I missed the entire last 40 minutes of Gotham desperately trying to order The Force Awakens tickets. 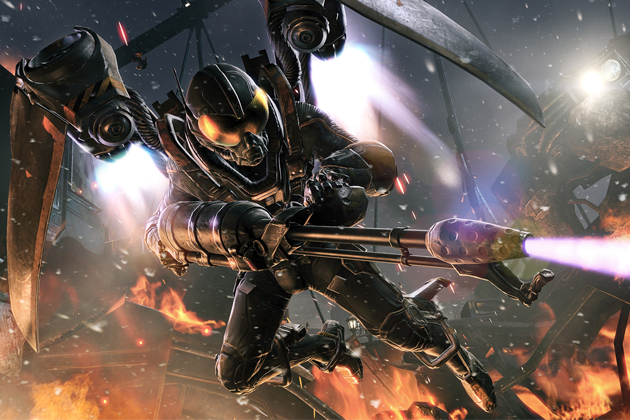 Bridgit Pike is actually the first ever female incarnation of Firefly, so good on you, Gotham. In modern day comic book-land, Firefly is Garfield Lynns. Lynns is a former pyro engineer for the movie industry that turned to crime because Gotham City gonna’ Gotham City. He actually also has just about the same exact origin story as Bridgit: an arson that burned himself during his own heist, built a flame retardant suit as a result, for some reason made that suit look exactly like a bug, and the rest is history.

I know the presence of Morena Baccarin as Leslie Thompkins may confuse the issue, but this Firefly is not to be confused for Joss Whedon’s space-western of the same name. Only one of those Fireflies brings sadness, despair and fiery destruction at the mere mention of the name. The other one is just a Batman villain. Let’s just say I don’t cry over a shrine to Garfield Lynns every single night. 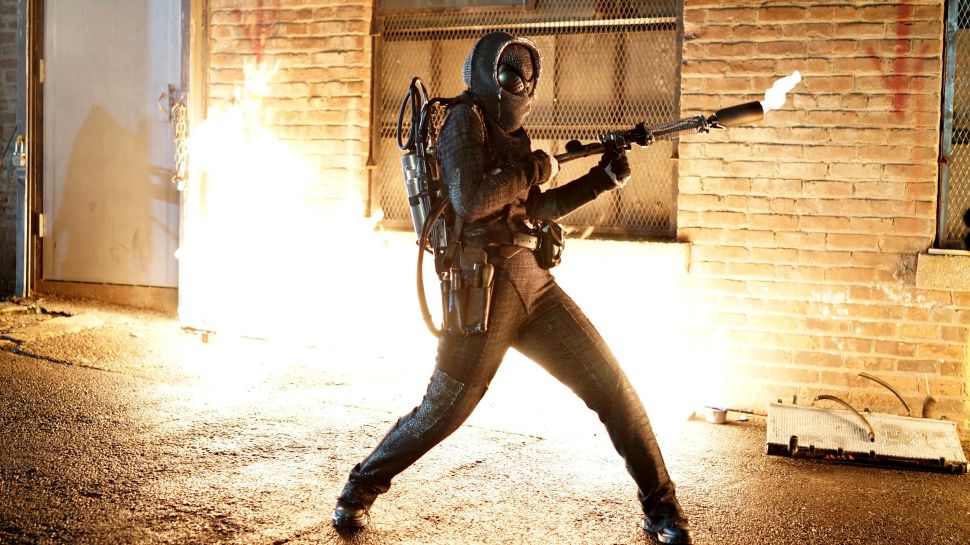