The media world was in shock this afternoon when ESPN announced that it would no longer publish the longform sports and culture site Grantland. The network said in a statement that it had “decided to direct our time and energy going forward to projects that we believe will have a broader and more significant impact across our enterprise.”

Grantland’s broad scope was a draw for many writers, who took to Twitter to mourn the demise of a site they loved writing for:

I loved everyone I worked with at G and loved what we built. Watching good/kind/talented people get treated so callously = simply appalling.

Grantland, I loved working for you. I will always treasure my association with its writers and editors. ESPN, you blew it.

Got to work with warm, smart, wildly talented people who believed in me for five years. I’ve been the luckiest writer on earth.

Grantland always felt too good to be true. It was my favorite website as a reader, and one of best experiences I had as a freelancer.

I'm just alternating between starting to cry and laughing at the thought that we even got to do it at all.

Grantland and the people there changed my life. I'm going to miss it terribly.

You're all very nice. Thanks. We miss Grantland too, and we'll all keep writing stuff somewhere else until the 40th anniversary reunion tour

I prefer at times like these to be grateful rather than sad. Frankly, it's amazing that Grantland was able to exist at all.

FiveThirtyEight, ESPN’s other umbrella website, is unaffected by the Grantland shutdown, according to editor in chief Nate Silver. 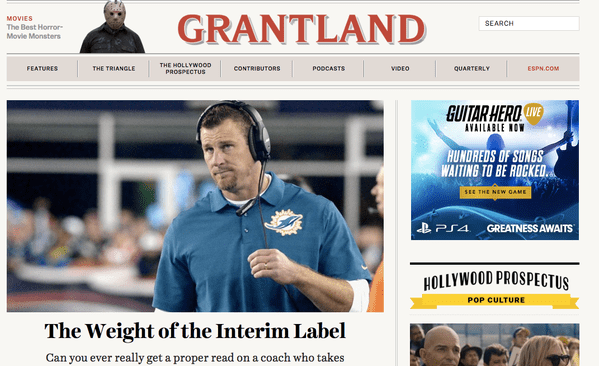