Just in time for Halloween comes a royally macabre exhibition about the death of one of France’s most significant historical figures, Louis XIV.

The Palace of Versailles will hold a “veritable funeral opera,” looking back on the death of, and the events that surrounded, the demise of Europe’s longest-reigning monarch from October 27 through February 21, 2016.

“Le Roi Est Mort: The King is Dead” is the culmination of three years of research and planning. The show is organized into nine sections which include ceremonial portraits, effigies and gravestones, and even an account of Louis’ autopsy—which, according to documents, included cutting and separating his body into three sections (body, heart, and entrails) before his embalming. The king was eventually laid to rest in a coffin made of lead and oak.

Visitors can look forward to viewing Louis’ coffin plaque and an assortment of surgical instruments and drugs from the era, alongside the gilded crowns, scepters and swords that would have been displayed at his funeral ceremony.

Italian opera director and set designer Pier Luigi Pizzi was called upon to help design the exhibition’s theatrical layout. One section, devoted to his elaborate funeral procession, is enhanced with lighting effects and the music of Philidor’s Funeral March. 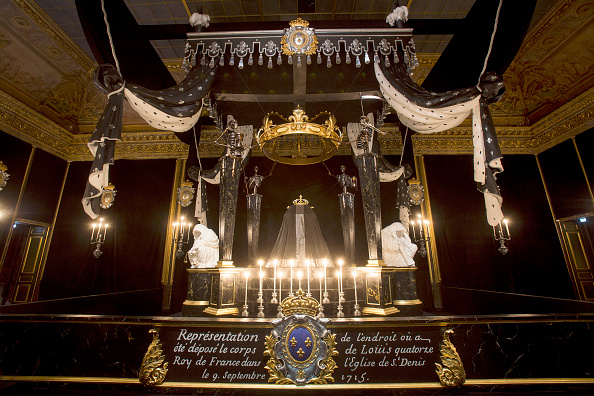