Gathered outside Harlem’s Schomburg Plaza, Mr. Santana—who spent five years in prison in connection with the assault and rape of Trisha Meili—hailed Mr. Perkins as one of the few public officials who came out on the side of him and his four friends. Another of the Central Park Five, Korey Wise, who spent 12 years in prison, also appeared midway through the event to stand by Mr. Perkins’ side, though he did not speak.

“A lot of politicians wouldn’t touch this case. A lot of people ran from this case. Only a handful of people ran toward this case. And one of those people being Mr. Bill Perkins,” Mr. Santana said, continuing after being interrupted by a heckler who claimed Mr. Perkins had failed to secure him a promised job. “Bill has always been there for us from the beginning for us. Bill came in and stepped in when other didn’t. Bill became family to us.”

All five of the men, juveniles at the time they were tried and sentenced, were exonerated when DNA evidence proved another man had committed the crime by himself. Mayor Bill de Blasio broke with his predecessor by agreeing to settle the men’s lawsuits against the city for discrimination and malicious prosecution for $41 million last year.

Mr. Perkins, who was a councilman before becoming a state senator, pointed out that both districts he had represented heavily overlapped with the congressional seat. He vowed to limit the expansion of charter schools in the area, improve conditions in public housing and to try to keep down quickly rising rents.

He praised longtime residents of the district for sticking it out through the era of the Central Park jogger.

Interestingly, Harlem Assemblyman Keith Wright—who declared his candidacy for the seat in June—blasted a press release to reporters shortly before the event was scheduled to begin announcing that he had the endorsement of another of the Central Park Five, Yusef Salaam.

The demographics of the district have changed over the decades: from overwhelmingly black to majority Latino. Mr. Rangel was able to twice beat back challenges from Dominican-American State Senator Adriano Espaillat thanks to strong African-American turnout and divisions between different Hispanic communities.

Asked how he could represent a large Latino population, Mr. Perkins initially responded in Spanish before highlighting his support for the Dream Act, which would provide taxpayer-funded college tuition assistance to undocumented immigrants.

“We have to continue the great tradition of what we might call ‘the American Way.’ Which is to embrace immigrants and to open the door of opportunity for them as well,” he said.

Many observers suspect Mr. Espaillat will run again. There are also rumors that Assemblyman Guillermo Linares and Assemblyman Robert Rodriguez will seek the seat, as well.

Stay-at-home dad Mark Gallagher of Washington Heights is a longshot candidate of the contest. 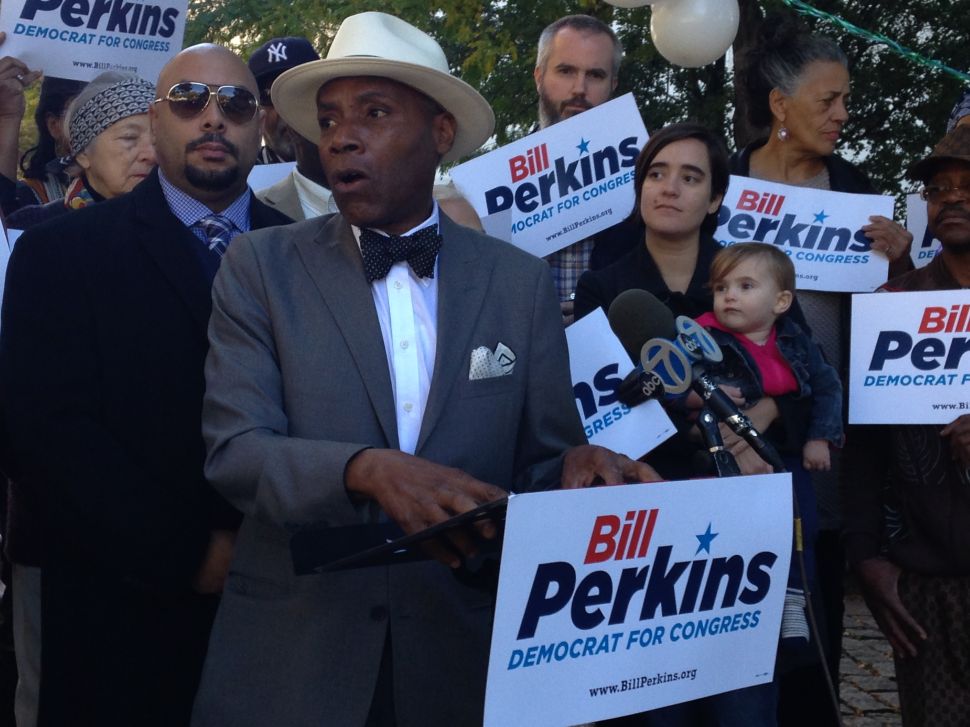