A little over a year ago, Sotheby’s broker Nikki Field was just about to close on a sale when her clients, a pair of high-rolling international buyers, called with a request.

They still wanted the property, they told her, but they’d decided they wanted all the furniture, as well.

Normally, that would be the end of the matter. Not, however, in this case.

The day of the closing “we go to do inventory, because you need the inventory attached to the contract of sale,” Ms. Field said. “And we’re in the living room at the bar, and there are these beautiful crystal carafes of liquor there. So we put those down [on the inventory list], and then the wife (her client) said, ‘Put the liquor on there, too.’ ”

“I said, ‘You want that?’ ” Ms. Field recalled. “And she said, ‘Yes, we want everything that’s in here.’ So the scotch and the vodka and the Grand Marnier was all added to the inventory list.”

They didn’t stop there. Next, Ms. Field said, her clients asked that a group of picture frames be included—with the sellers’ portraits still in them.

“The family photographs—their grandmother, their children, their dog. Can you imagine how strange that was?” she said.

Furnished apartments ‘are like the girlfriend you don’t have,’ said Prime Manhattan Residential president Robert Dankner. (Though you have to think: If you weren’t too lazy to buy your own couch, maybe someone would want to date you.)

“After an extended negotiation, it was decided that the photos would stay with their original owners,” Ms. Field said. “That was where they drew the line.”

There was still one more request to come. As the two parties finally sat down to close the deal, Ms. Field noticed a bit of hushed chatter coming from her clients. Pausing the proceedings, they asked her to come with them out of the room for one last ask.

“So,” she recalled, “I come out with them, and they tell me, ‘Our daughter really likes the [family’s] cat.’ ”

As of October 20, StreetEasy listed 68 New York City properties for sale fully furnished. None comes with a cat (though, if you ask, who knows?), but you can get most anything else.

For instance, $5.3 million gets you a two-bedroom at 260 Park Avenue South stocked not only with furniture from designers like Christian Liaigre and Fritz Hansen but also an art collection featuring pieces from, among others, Frank Stella, Richard Serra and Damien Hirst.

“It’s fully turnkey,” Doug Perlson, CEO of RealDirect, which has the listing, told the Observer. “The owner had the apartment decorated professionally, so everything from the furniture to the art work to the floor coverings has been done by a particular designer. The apartment is completely done to where you can literally just bring your toothbrush and have a home.”

If you’re dropping $5 million-plus on an apartment, though, don’t you want to bring your personal touch to the place? Might you not, for instance, have a Richard Serra of your own that you were looking forward to unboxing?

Typically, yes, Mr. Perlson said, noting that furnished properties are most popular with out-of-towners looking for a pied-à-terre and investors who want to rent out their units with a minimum of hassle.

“Usually it will be someone who is renting out an apartment on a short-term basis, say a couple of weeks, a month, for corporate relocations or tourists,” he said. “It’s very basic—your basic IKEA set, a couch, an arm chair, a dining table, dishes and towels. Things you would find in a hotel.”

Then there are investors after a more upmarket audience. Take, for example, Penthouse H at 201 W. 17th St., which recently hit the market for $5.9 million (or as a $25,000-per-month rental). Offered fully furnished, the unit’s previous tenant was Katie Holmes.

“I get in, they buy it fully furnished and the next day after closing I can lease it out. It’s done, and done beautifully, perfect for a renter,” she said.

‘Half the people who are buying real estate are buying up. So they are living in something inferior and now they have a bigger budget and they are going into better homes than they live in, and all of a sudden they are quite taken with the decor and think, well, these people got it right.’—Sotheby’s broker Nikki Field

The other big market for furnished apartments?

Furnished apartments “are like the girlfriend you don’t have,” said Prime Manhattan Residential president Robert Dankner. (Though you have to think: If you weren’t too lazy to buy your own couch, maybe someone would want to date you.)

In his experience, such sales are usually serendipitous, he added.

“Normally it’s not planned, it just sort of has to be a perfect storm where everything clicks [in terms of the buyer’s and seller’s taste],” Mr. Dankner said. “The buyer is usually a single guy. I’ve seen it happen a number of times.”

“Most people who want to occupy their own apartment want to have their own furniture,” said Tom Ripellino, CEO of Metropolis Real Estate, which is representing a furnished studio at 55 Wall Street for $799,000.

But, he noted, “you do have situations where a new building might have a model apartment and somebody might want to buy that as is because it’s already figured out and [the building] has done a better job than they think they can do themselves in terms of the interior design.”

“My god, he’s going through the trauma of divorce and looking for a home near where his children’s mother lives!” she said. “So now he needs a playroom; he needs closet space; he needs beds where the kids can come and stay those three nights a week. With everything else he’s going though, one easy thing is, ‘let’s get you a turnkey.’ That is something that gives [divorced fathers] a great deal of relief.”

With pickier types, however, trying to sell furnished can be a liability, Mr. Ripellino said.

“A lot of people don’t want to take over the previous owner’s concept of what might be a great idea for, say, an entertainment center or that sort of thing,” he said. “One person’s taste might not match another’s. As a matter of fact, it rarely does.”

“Usually when someone spends a million dollars on an apartment, they don’t want someone else’s old furniture,” said Mr. Sapozhnikov.

At the same time, said Ms. Field, buyers moving up in the world are sometimes enamored of what they find once they see how the other half lives.

“Half the people who are buying real estate are buying up,” she said. “So they are living in something inferior and now they have a bigger budget and they are going into better homes than they live in, and all of a sudden they are quite taken with the decor and think, well, these people got it right.”

What sort of premium a person gets for selling furnished depends, of course, on the quality of the furnishings, but Mr. Ripellino said that in general sellers can expect an extra 5 to 10 percent.

Ms. Field agreed. “The cardinal rule is that you always separate the price points,” she said. “You want to first negotiate on the sale of the bricks and mortar and then separately on the furnishings. You do not want a perfectly acceptable apartment sale imploding over a chandelier or a side table.”

Or, you know, a cat. Which, by the way, turned out not to be a deal breaker for Ms. Field’s international clients after all.

Understandably hesitant to broach the inclusion of house pets in the sale, Ms. Field said she first tried to steer the couple toward an alternative, offering to take their daughter to the ASPCA and get her any cat she liked. They were insistent, though, that only that particular cat would do.

And so, finally, out of options, she put the question to the sellers. Would they include their cat in the deal? 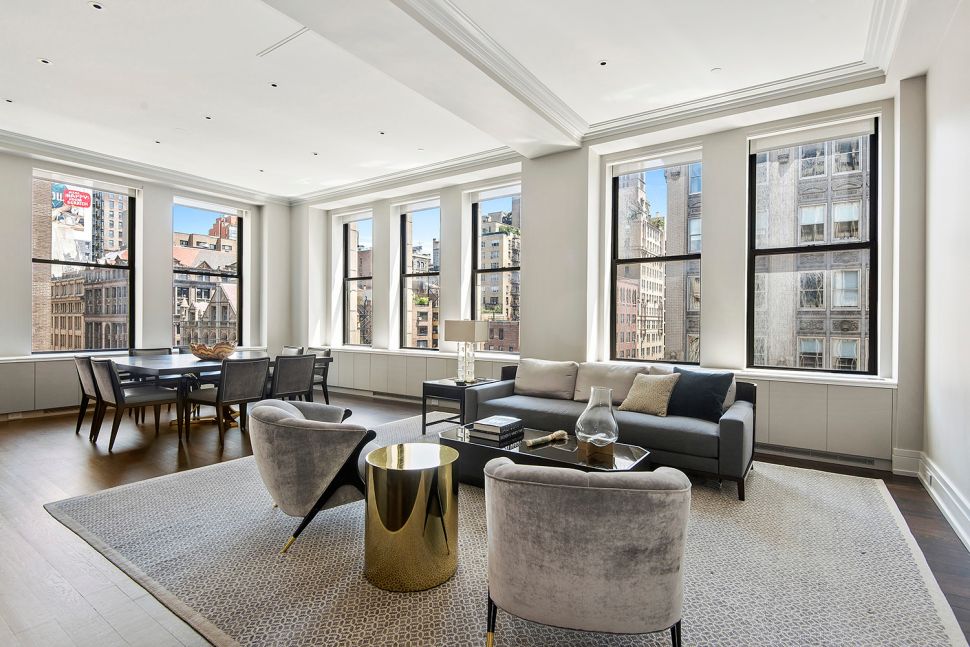