I couldn’t stop wondering — what kind of health expert accepts Coca-Cola funding? Turns out that most are dietitians with a flair for local media outreach — a surprising number of whom could be played by Kristen Wiig in the made-for-TV movie of this scandal.

Of the 115 individuals Coca-Cola admitted to funding, here’s a breakdown: 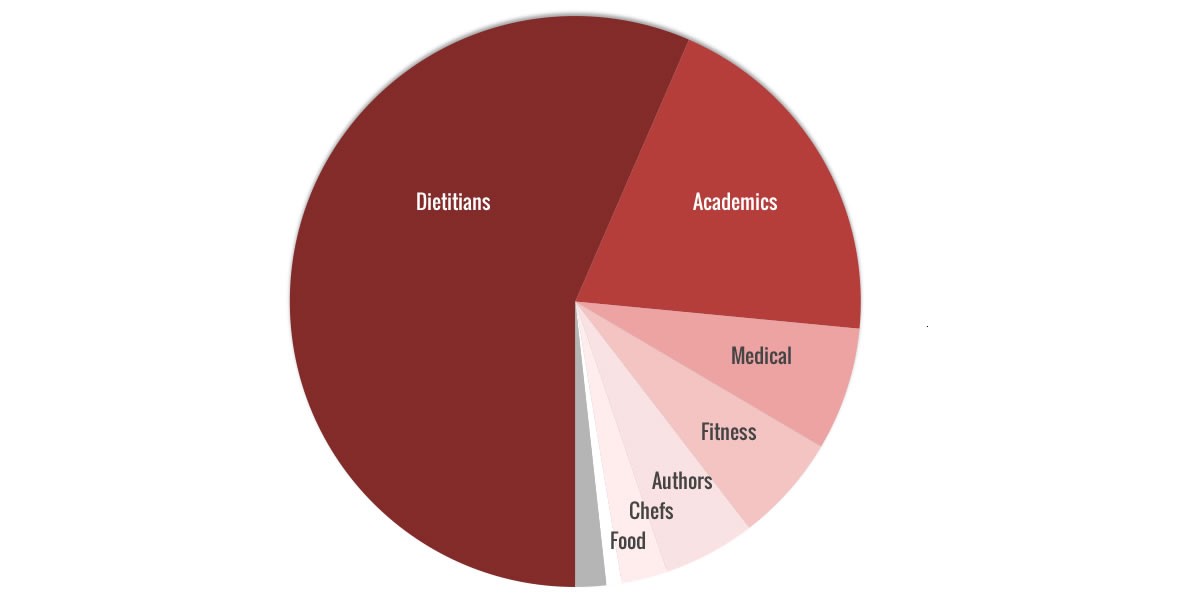 By sector, 57 percent (65) are dietitians, 20 percent (23) are academics, 7 percent (8) are medical professionals (mostly Doctors), 6 percent (7) are fitness experts, 5 percent (6) are authors, 3 percent (3) are chefs, and 1 percent (1) are food representatives. I was not able to identify sectors for two of the funded experts.

The Coca-Cola website says these health experts were paid travel grants, related expenses and professional fees — but doesn’t disclose what specifically they were being paid for. Many of the dietitians seem to be members of the Academy of Nutrition & Dietetics recruited around the campaign to promote the new mini Coke cans as a healthy snack.

Again, I wonder, what was the process of building this strategic network of pro-soda health influencers? Were they courted and paid proactively for their appearances in media, or rewarded after their pro-soda commentary with a trip and honorarium to share their findings around the country? Coca-Cola says the experts state their own views, disclose their relationship with Coke, don’t necessarily have an ongoing relationship, and do not endorse the company.

The New Faces of Coke

I wanted to dig deeper into this network of influencers to learn more about the strategy. Why were they chosen? What do they have in common? Where are they most influential?

From the Coke list, I was able to find 63 percent are active on social media — and as a group they have over 180,000 followers on Twitter and 150,000 likes on Facebook. That doesn’t include the organizations they work for, just their individual accounts. I made a Twitter list you can follow here. But upon deeper inspection, many are effective communicators whose influence reaches deep into our culture. That’s the whole point.

I’ve highlighted 11 of the most surprising health efforts that — turns out — received funds from Coca-Cola to spread a pro-soda message. There are many more to uncover, I’m sure, but this is just a start.

You probably saw the compelling story on CNN that a nutrition professor ate only Twinkies for 10 weeks and lost 27 pounds! Except they didn’t disclose one important fact — he got paid by Coca-Cola. Perhaps “Coke-Funded Nutrition Professor Tries to Prove Junk Food Healthy” is now a more appropriate title. And his surprising finding that junk food can be eaten without consequence: perfectly on message for Coca-Cola.

When you’re watching your favorite Food Network show and Coca-Cola is used as an ingredient, do you know that Coke is paying the chef? It never occurred to me.

Many of the dietitians funded by Coca-Cola appear regularly as experts in local TV segments, food blogs or nutrition articles. They show moms how to pack healthy lunches and pitch health tips including use of Coke as a snack. Sylvia Klinger from this list suggests “drinking a mini Coke can with mini sliders” as a healthy way to cut down portion sizes during the Superbowl.

Another example is Robyn Flipse, a member of the Academy of Nutrition and Dietetics who tweets as @EverydayRD.

Robyn Flipse, the dietitian who wrote the sponsored article for Coke, said she would suggest mini-cans of Coke even if she wasn’t being paid. Although she doesn’t drink soda herself, she said the smaller cans are a way for people who like soda to enjoy it sensibly. “I absolutely think that I provided valuable information,” she said.

Flipse said the idea to mention mini-cans of Coke in the post was hers and came about after a public relations agency for Coke suggested a piece on heart health and asked what she might “work in.”

Flipse has worked with Coca-Cola and the American Beverage Association for years; her roles have included sending out messages on social media refuting the idea that sugary drinks are to blame for obesity and making herself available as an expert for news outlets. If a story says something negative about artificial sweeteners, Flipse said she might contact the PR agency and ask, “Do you want me to do something about that?”

It’s no surprise anymore that the soda industry’s primary strategy is to shift all obesity blame from junk food to exercise. So it should also be no surprise that three researchers behind the new nonprofit organization called the “Global Energy Balance Network” appear on the Coke payroll. The group promotes the idea that way too much focus has been placed on eating when the real culprit is exercise. The effort is being led by Dr. Steven Blair of the University of South Carolina, Dr. Greg Hand of the University of West Virginia, and Dr. James Hill of the University of Colorado.

The Hunger Fix, in which Dr. Pamela Peeke defends sugar against unwarranted scrutiny.

The Obesity Paradox: When Thinner Means Sicker and Heavier Means Healthier, in which Dr. Lavie debunks the media’s hyper focus on junk food as the obesity culprit. Dr. Lavie was actually asked about the impact of Coke funding research and he defended the practice of accepting money from Coca-Cola. Of course, we know that research with beverage industry funding is 5x more likely to find no association between soda and obesity than publicly funded other studies.

“Marked declines in physical activity, which is also a major component in leading to fitness, is by far the major cause of obesity, not sugar and fast foods.” —Dr. Carl Lave

Am I Hungry?, in which Michelle May gives self-help advice to “eat what you love” in balance and moderation, not depravity. Of course, this includes Coke — which she recommends as a mindful eating option.

“If you’ve got soda lovers coming to your party, you can serve Coke minis for people to enjoy the flavors they love without overdoing it.” —Michelle May

Dr. Bernadene Magnuson is on the Coca-Cola payroll to calm the concerns about Aspartame, a controversial artificial sweetener used to replace sugar in Diet Coke. It may sound scary, but it’s totally normal.

John Calfee of the American Enterprise Institute appears to be funded by Coca-Cola to share his expert opinion that there is no “scientific support for using soda taxes to fight obesity” everywhere from Huffington Post to CNBC. Wonder how much they paid him to spread that opinion around?

Sarah Bedwell is on the Coke payola list, and posted about her love for Coke in an article for SELF magazine. She even mentioned Coke as a healthier beverage option in her book “Schedule Me Skinny.”

“Sometimes only the real thing will do when it comes to soda, so I am a big fan of the new Coke mini can! It is real soda classic, but it’s in a cute portion-controlled can that keeps my bubbly treat to only 90 calories!”

Dr. Robert Sallis is on a noble mission to get America walking again. His exclusive focus on physical activity scored him funding from Coca-Cola. You’ll notice the research of Dr. Blair from the GEBN (also on this list) is a prominently featured interview.

My local radio station, Wisconsin Public Radio, hosted an expert on the benefits of caffeine a few years ago. It was a fun, thoughtful and well researched segment — by someone on the Coke payroll. Because caffeine being good for you is good for business, too!

“In the case of caffeine use, it is an easy safe way of getting a lot of benefits and it’s foolish to avoid it.” — Bennett Weinberg

Former Director of the Gatorade Sports Science Institute, Dr. Robert Murray, appears on the Coke payola list. He left the Institute to start his own company Sports Science Insights. His insight on obesity’s cause? Gluttony and sloth. I’m just going to leave this right here for you to enjoy.

Kyle Pfister is the founder of Ninjas for Health, a startup based in Milwaukee that consults for public health agencies. 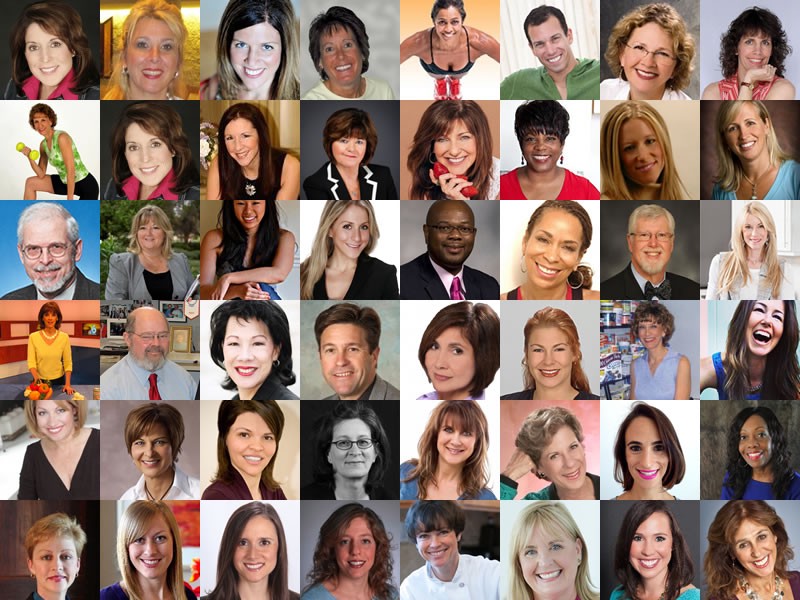