Now that Vice President Joe Biden has finally chosen to not run for president, a media narrative will comfortably take shape.

It goes like this: Following the death of his son Beau, Mr. Biden agonized endlessly over his decision, huddling with family and close advisers over whether he should take a third run at the White House. Over the summer, controversy over Hillary Clinton’s use of a private email server while she was secretary of state did serious damage to her status as a front-runner, and Mr. Biden rightly saw an opening, especially as Sen. Bernie Sanders of Vermont cut into Ms. Clinton’s once commanding lead in the polls. But Ms. Clinton, standing strong, righted herself in an October televised debate, proving her doubters wrong and closing the door on the vice president. Mr. Biden graciously took himself out of the running.

But his candidacy never made much sense to begin with.

While reporters and pundits hyped Mr. Biden as the affable, authentic liberal that American voters craved, a few doubters raised significant red flags Mr. Biden was forced to reckon with as he proved many well-sourced news stories wrong and delayed his decision into late October. One was obvious: money. Mr. Biden, months away from the Iowa caucuses, had no boots on the ground, no fundraising apparatus and only a handful of available operatives to immediately spring into action.

Mr. Biden was effectively running for president all summer behind the scenes. He was reportedly talking to donors and operatives in early voting states about the possibility of a late entry into the race. One dilemma he had was that establishment dollars and talent had long been vacuumed up by Ms. Clinton who, despite her myriad flaws as a candidate, remains one of the most vaunted Democratic primary contenders in history because national Democrats put all their eggs in her basket long ago.

With more than 100 members of Congress and governors united behind Ms. Clinton already, Mr. Biden’s wiggle room was severely limited. Unlike Mr. Sanders, a self-described democratic socialist, Mr. Biden’s campaign would have been dependent on the kinds of major establishment donors who have buoyed Ms. Clinton’s campaign so far. She is spending heavily, but still has $33 million cash on hand, more than any other candidate. The Draft Biden PAC, a shoestring effort, wasn’t nearly enough to help him make up ground.

There was simply no oxygen for Mr. Biden in 2016. His campaigns for president in 1988 and 2008 were disastrous, and even with the aura of an elder statesman, Mr. Biden offered little contrast to Ms. Clinton. Like her, he voted for the Iraq War. Like her, he was close to Wall Street and the financial sector when he served in the Senate, cultivating a cozy relationship with the credit card industry. Like her, he was once in favor of tough-on-crime policies and free-trade agreements, both reviled by liberals today. (He still backs Mr. Obama’s Trans-Pacific Partnership, which Ms. Clinton now opposes.)

Unlike Ms. Clinton, he offered no history-making cache. At 72, he is even older than her. Ryan Lizza of The New Yorker pithily summed this up in an August tweet: “What is the case for Biden over HRC? Youth?❌Gender?❌ Broad party support?❌ Lefty cred?❌ Money?❌ Superior campaigner?❌ Makes no sense.”

Mr. Biden was also unlikely to scoop up any of Mr. Sanders’ supporters, who comprise mostly of white progressives dissatisfied with Ms. Clinton, Vox pointed out. Mr. Sanders is running on a hard left platform–free college tuition, universal healthcare and non-interventionist foreign policy–out of step with what Mr. Biden has advocated for throughout his political career. Mr. Biden is the definition of a mainstream Democrat that Mr. Sanders, an independent, has railed against for decades.

Even Mr. Biden’s poll numbers, occasionally cited as a reason for him to run, were never exceptional. For two months, despite being a sitting vice president with high name recognition, he steadily trailed Ms. Clinton and Mr. Sanders, never leaving the orbit of 15 to 20 percent. If Mr. Biden became a candidate, he could expect bruising attacks from Clinton surrogates that would only tarnish his brand.

Among Democrats, Mr. Biden was never particularly popular. HuffPost Pollster has tracked polls on Mr. Biden and Ms. Clinton going back to late 2012. Ms. Clinton led in every one by an average of 30 point.

So what was left for Mr. Biden? Not much. He will ride into the sunset, his dignity intact. 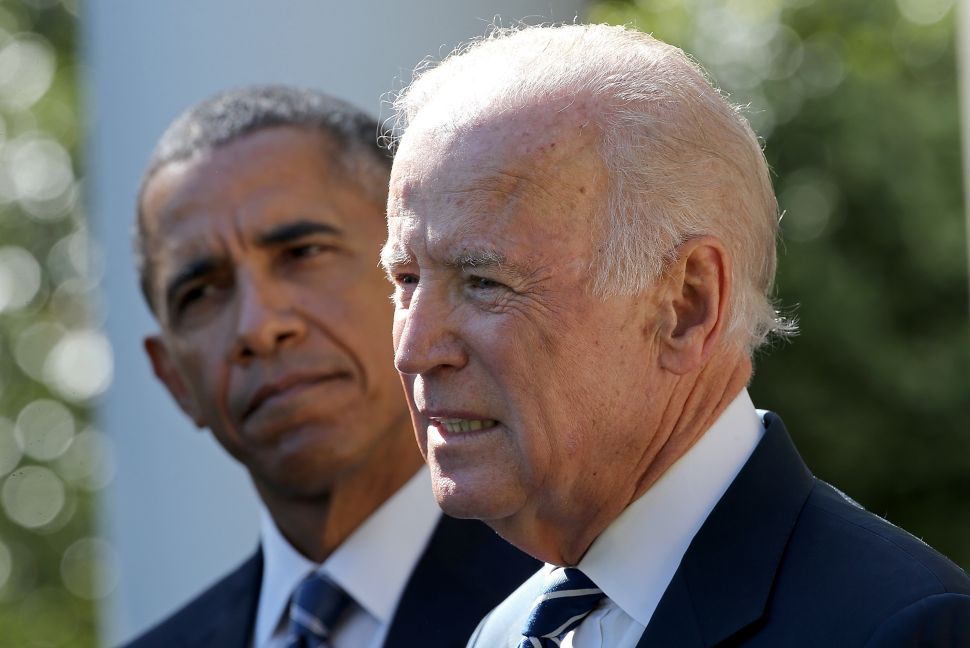