Let’s discuss first the charge, then the truth and then the impact of Hillary Clinton’s false charge that Bernie Sanders is a sexist during their recent debates over gun control.

Here is the charge: Mr. Sanders has been saying that nothing is achieved by politicians “shouting” about gun control. In response, Ms. Clinton replied she was not “shouting” in her advocacy and implied that when men—in this case Mr. Sanders—say women are “shouting” they are being sexist.

Here is the truth: Bernie Sanders is not a sexist.

Period. Exclamation point. End of discussion. Mr. Sanders has a stellar and uncompromising history of supporting the range of rights and aspirations for women. He and many other male and female politicians often use the word “shouting” as a figure of speech applied equally to men and women in the course of political debate. Ms. Clinton knows this well. She also knows very well that Bernie Sanders is not sexist.

If this column offered a truth-o-meter, this political attack by Ms. Clinton that Mr. Sanders is sexist would earn the maximum number of Pinocchios.

Sometimes in order to win an election she plays fast and loose with words, with the result that she generates an abnormally high level of distrust from voters.

Here is the effect of this Clinton charge against Bernie Sanders: first, it does not enhance her reputation for being trustworthy, which is in need of enhancing, and second, it angers supporters of Mr. Sanders, who she will desperately need to vote for her in November 2016 if she is ultimately the Democratic nominee for president.

“Who doth ambition shun” wrote Shakespeare in As You Like It. The rap against Ms. Clinton, which sometimes concerns even many of her supporters, is that sometimes in order to win an election she plays fast and loose with words, with the result that she generates an abnormally high level of distrust from voters.

Nobody has defended Ms. Clinton stronger than I have since 2012 against the partisan attacks against her from Republicans in Congress who have been abusing the rules of Congress and misusing Congressional committees. I have defended her against GOP slanders in print, on the Internet and on radio and television throughout 2012, 2013, 2014 and 2015 and have called on the House Ethics Committee to investigate the House Benghazi Committee for unethical abuses of power.

Her triumph over the House Benghazi Committee in its latest inquisition masquerading as a hearing lifted the hearts of Democrats everywhere, including Mr. Sanders, who fiercely defended her in their last debate when he said he was tired of hearing about the damned Clinton emails and won a huge ovation from Clinton and Sanders supporters alike.

The sad and strange thing about the bogus attack by Ms. Clinton against Mr. Sanders when she suggested he is sexist is that it was both wholly false and wholly unnecessary. At the very moment Ms. Clinton was regaining strength after her strong performance before the Benghazi committee—after an assist from Mr. Sanders, who showed his character and integrity defending her over the emails during the debate—she regressed to the kind of low blow that accounts for the kind of distrust she often generates.

When I worked for Democratic leaders, the Democratic members from more conservative states and districts would tell us privately that they would rather not vote on the issue, and would only vote for gun control if there was a grand and sustained battle and their votes would provide the margin of victory. I spent many years working for House Democratic leaders and for senior Democratic senators such as Lloyd Bentsen. In those positions I worked with Democrats representing all factions and regions. The reason major gun control does not become law is the National Rifle Association has a dominating power in the capital. Even many Democrats from more conservative states are afraid to take on the NRA, which can and should be defeated, but will only be defeated if Democrats wage a sustained and all-out fight on the floor of the House and Senate.

After the mass murder of children at Sandy Hook—which should have inspired the grand battle that was long overdue—grieving families of the murdered children came to Washington to support gun control legislation at a White House event.

I was told off the record by senior Democrats in Congress and in the Obama White House, “Don’t go too far in your columns about gun control because nothing is going to happen.” I am telling a sad truth about Washington that much of the talk about gun control after Sandy Hook was nothing more than public relations. The moms and dads mourning the death of their sons and daughters were brought to Washington for a staged media event supporting legislation that the White House and Democrats in Congress knew would never pass, because Republicans and the NRA would fiercely oppose it and the Democrats would not push it for political reasons.

I considered this charade to be one of the greatest outrages of my years in Washington.

My guess is that this truth—which is rarely told in official Washington—lies at the heart of the Clinton-Sanders debate over gun control.

I support Ms. Clinton’s strong position, but only if she is willing to wage the sustained and grand battle that will be necessary to win, and is not merely using the issue as  a political talking point for a Democratic nominating campaign that would be abandoned if Democrats win the election.

Whatever the merits of the gun control debate, Bernie Sanders is not a sexist. His comments about “shouting” had nothing to do with his views about women. The Clinton charge of sexism was both false and offensive to supporters of Mr. Sanders.

Bernie Sanders is the candidate of conscience for progressives. On issue after issue—including issues of vital importance to women—Mr. Sanders has been a leader and champion in the House��and the Senate, year after year, decade after decade. He has talked the talk and walked the walk in good times and bad, under Democratic and Republican presidents and Congresses, whether his positions championing progressive causes were popular or not.

It is a political mistake of the first order of magnitude for Ms. Clinton to falsely charge Mr. Sanders with sexism. This charge is transparently false, unworthy of the Clinton campaign and unworthy of the Democratic party.

Gun control is a very legitimate issue, but to charge Mr. Sanders with sexism is a totally illegitimate tactic. It does not help Ms. Clinton, who needs to rebuild high levels of trust, and should not be insulting Mr. Sanders with false charges and offending his many supporters who are the heart and soul of the Democratic party. 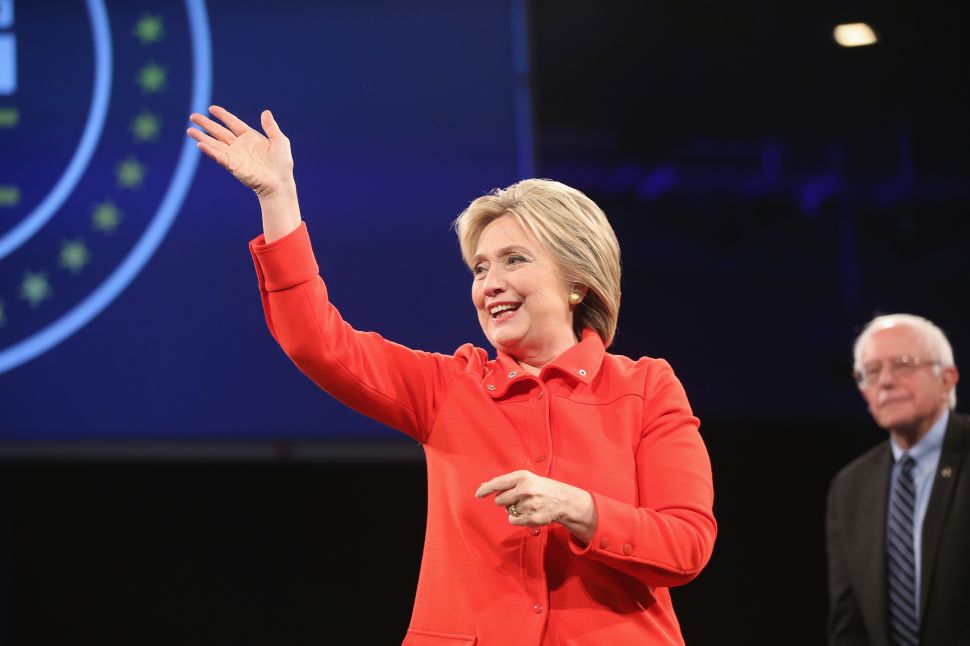