Last week, we saw the new territory that Homeland would be covering: German antiterrorism efforts, Carrie’s new work in the private sector, and the fallout from a Snowdenesque leak of classified information. Largely absent, though, was the question of personal strife. Homeland shines brightest when the political intrigue and gunplay illuminate the ways that Carrie and the gang are striving (and often failing) as moral beings. “The Tradition of Hospitality” folds in this question of character, showing more clearly the screws that will be put to Carrie, Saul, and Quinn.

Carrie has arrived in Lebanon, scouting the refugee camp in advance of Otto Düring’s arrival. The camp’s official administrator is painting a dreary picture of the local security situation when Carrie and her team are whisked away to meet with Walid, the Hezbollah functionary that actually runs the town. After intimating that he takes some issue with the folks who sold Carrie safe passage in the first place, and after accepting another 40,000 dollars in cash, he makes his final offer: one hour of protection for Düring, after which he cannot guarantee anyone’s safety. Her protests aside, Carrie seems to accept that for that one hour, her people will be more or less safe, which begs the question: what sort of security threat can be neutralized for an hour, but not for an hour and 15 minutes?

Right on schedule, Düring’s visit goes haywire, first when a man with a bomb approaches the team and is killed, and then when Carrie and Otto’s driver attempts to steer their vehicle over some sort of explosive. Carrie manages to shepherd Düring out of the country, but insists on staying around Lebanon to find out what happened, and what she finds puts her in quite a state: Hezbollah blames the disruption on their local man, Walid. Carrie sees a recording of Walid being tortured, during which he claims that Carrie herself was the intended target of the attack but does not reveal the party or parties that put him up to it.

Meanwhile, back in Germany, Laura Sutton is crowing on television about her spying revelations while all the other players look on. Saul and Allison Carr, the CIA’s station chief in Berlin, weigh the damage that Sutton might do and consider Sutton and Carrie’s connection through the Düring Foundation. Astrid and German Intelligence listen in while they’re searching Sutton’s apartment and decide to bring her into custody. The hackers intuit that the time has come to hand over more documents and decide to surprise her outside the television studio. As she hits the street, though, she’s arrested.

Saul, using the lightest touch he can muster, tells Carr that she’ll be taking the fall for the security breach and will be recalled to the United States. After objecting a few times on practical grounds and pointedly reminding Saul that her support has helped preserve his standing at the Agency, Carr calls Dar Adal at Langley and suggests a bold play: that Saul should be burned in her stead. Dar Adal, perhaps not yet having decided whom he would most like to antagonize this season, makes no promises.

Quinn, for his part, has been out on the streets of Berlin, earning his keep by serving the interests of the United States. Which interests, in this case, are the tracking and killing of a woman who gathers young female recruits for the Islamic State. Quinn watches as she picks up three young women, sees to their paperwork, cover stories, and pocket money, and hands them over to another contact. Notably, perhaps, Quinn doesn’t observe any of these women engaging in or speaking about actual terrorist activity, but he sets other agents on the recruits and kills the recruiter all the same. He returns to the dead drop and picks up his next assignment: one Carrie Mathison.

So it would seem that Saul wants Carrie dead, but such an explosion in the show’s central relationship will doubtless receive some shading as the season carries on. A more practical question, at this point, is whether the powers playing Quinn against Carrie are the same ones who brought about the attack in Lebanon. Carrie finds herself almost totally alienated from the organizations that might protect her. The CIA reviles her for having switched sides, as it were. The Düring Foundation keeps her at arm’s length because of the likelihood that she’s spying for the Americans. She’s raising her daughter with her boyfriend in Berlin while she’s evading bombs around the globe. Here it seems that Homeland is driving back towards its bedrock conflict: the intrusion of Carrie’s bipolar disorder and substance abuse into her efforts to keep the world spinning. It’s a predicament that’s thrillingly brought to life by Claire Danes, even if it boils down to yet another indictment of a woman’s frailty.

It’s edifying, then, that we seem to be throwing Saul and Quinn into similar waters this season. They’ve tied themselves to principal: Saul to solidifying his position within the CIA and Quinn to carrying out his killings without any moral consideration. Now that they’ve apparently set themselves against Carrie, whom they’ve both counted as a dear confidante, we’ll see just how stern they care to be. 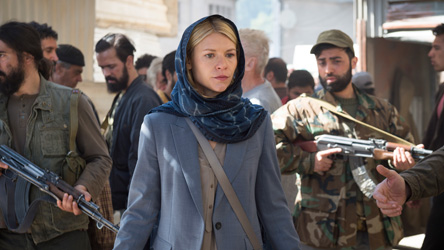