IT COULD BE RAINING, SNOWING, THE WORLD COULD BE ENDING, THERE WOULD STILL BE REASONS TO KEEP SMILING 😄

The Vine app continues to churn out its own niche breed of celebrities, all on a quest to achieve stardom through 6-second videos, often with a comedic edge. One of the most popular “Viners” is Jerome Jarre, who is perhaps most widely recognized as the guy who took an impromptu selfie video on the Valentino runway with Ben Stiller (in character as model Derek Zoolander) last March.

The 25-year-old Frenchman had a chance encounter with art dealer and former director of the Los Angeles Museum of Contemporary Art, Jeffrey Deitch, in the middle of Manhattan last week. To him, Mr. Jarre said, the art world legend was just another man on the street.

“It was completely random,” the Vine celebrity with over 8.5 million followers claimed in an email. “I was coming back from 6 months taking a break from social media, and the first video I wanted to create was telling my audience how much I missed Vining. So I picked the first guy I saw outside my apartment, and I told him how much I missed him. I had no idea who he was. After the 6 seconds he invited me to come to his new exhibition across the street. The guy was super cool. I received a text from my friend [photographer] Casey Neistat a few minutes later, ‘Yo. The guy in your Vine. It’s Jeffrey Deitch. Google him!’”

Mr. Jarre’s greeting on the Vine: “I missed you so much, so so much!” is all the more ironic (and universal, at least as far as much the New York art world is concerned) given that Mr. Deitch has just recently returned to his longtime base of operations here after a contentious stint in LA.

The exhibition Mr. Deitch invited Mr. Jarre to view was “Cinderella Of The Wastelands” by Marjorie Cameron currently on display at Deitch Projects until October 17th at 76 Grand St.

Below, the original 6 second video for your viewing pleasure. 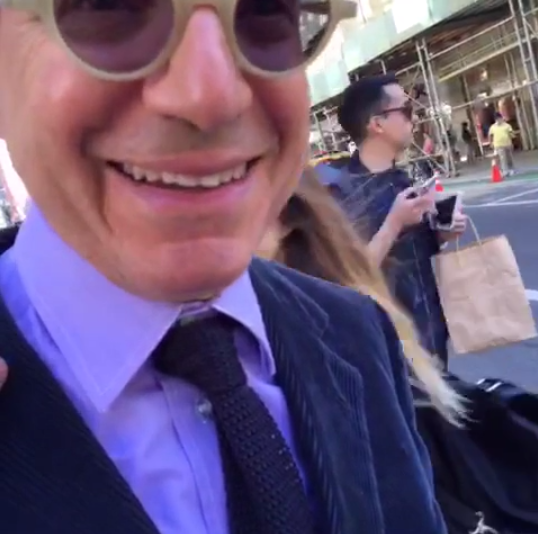