We open with a flashback. Annalise isn’t the only one dying on the floor in the future. Asshole lawyer lady (the prosecutor from Nate’s case) is lying on the ground just outside the home dying too… I’m assuming someone pushed her out a window for running her damn mouth too much. I know she’s in mortal danger, but Annalise’s eyelashes look amazing lying on this floor.

Present Day Annalise’s eyelashes are nothing to write home about, this is a classic “Annalise drunk with no eyebrows on” scene. Annalise talks into a tape recorder to remind the audience of how the Case of the Murdering Siblings is going. She hears a sound in the basement and goes to investigate, but it’s not an intruder (or the ‘Tell Tale Heart’), it’s a rat! She calls Wes to come over and he kills the poor little rodent! These people can’t go a day without killing something in this damn house!

Annalise tells the class that the theme of this weeks’s episode is “Sex”… which I guess means, that hasn’t been the theme of all the other episodes?

But it’s a good theme, because it means we get a sexy montage!

Wes and Annalise: I can’t be the only person who thought they were going to get it on when Wes paused in the door.

Micheala and Eggs911: MICHEALA!!!! Have you lost your damn mind? Who kicks those abs and those eyes out of bed?!

Asher and Bonnie: “Elephant trunk?” Gross. Does Asher have any redeeming qualities?

Coniver: It really excites me to think of how many people who have never heard of PrEP are going to Google it during HTGAWM.

Laurel and Frank are still not doing it. Maybe Laurel just doesn’t want to “get to know” a guy with such a gross hipster beard?

After checking in on all their sexual relationships, the gang gets to work on their case. This week’s client is a gorgeous dom, who allegedly killed one of her subs during sex. None of the clients from her sex parties want to testify on her behalf, which leads to all of the students timidly asking strangers about their sex lives. One construction worker talks to Asher while eating a foot long hotdog that is supposed to be a visual metaphor for the size of his dick but I’m like… where do people get foot long hot dogs in the middle of the work day? Does he work really close to a baseball stadium?

As Annalise yells at the Keating 5 for not being able to convince professional people to testify about their sex lives in public, Bonnie brings in a tabloid. To the surprise of no one, the ordering siblings from their other case are being accused of “sibcest”. No one casts two ridiculously hot, multi-ethnic, actors to play adopted brother and sister without planning to imply they’re secretly getting it on. That’s TV writing 101.

The Keating 5 eat healthy snacks and talk about their sex lives, and Micheala admits that she’s never had an orgasm. She says that according to Planned Parenthood, “1 in 3 women have difficulty achieving orgasm”. Between this and the PrEp story line, I’m starting to wonder if all those government funds the Republicans are trying to take away from Planned Parenthood have gone towards product placement on this show.

Micheala and Conner are at a sex party… are they going to make MiConner happen?

Annalise’s tape recorder is missing. That will probably come back to haunt us.

Annalise writes a police officer’s daughter’s name in her client’s sex party guest ledger, and asks him for “a job”. That will probably come back to haunt us too.

Micheala flirts with a woman and finds out that their client switched sex party cards in order to sleep with the victim… naturally Annalise then accuses the client of killing him. Because why else would someone want to sleep with someone? Annalise being bad at relationships really comes in handy when it comes to being a good lawyer. Because it turns out that the client did switch the cards so she could give the victim nitroglycerin. She wanted him have a heart attack while in the room with her so his wife would find out that he was sleeping with her and break up with him. Um, WHAT? Has she never heard of sending his wife a text? Dang!

So Annalise and the murdering side piece go to court. Annalise is wearing the best dress I’ve ever seen…. Seriously, I probably won’t wear a dress that nice to my wedding, and that’s what she wears to work?! Anyway, Annalise gets the victim’s wife to admit that knew about his Viagra prescription, then insinuates that she used the drug interaction information on the label of the bottle to kill him. The widow is distraught on the stand, and the murderer goes free. Then the woman Annalise just saved from jail yells at her and asks how she sleeps at night. Annalise replies “Alone. On very comfortable sheets,” and 25 million people run to their computers to make memes.

Asshole lawyer lady (who had the missing tape recorder, and heard Annalise’s entire case strategy, btw) texts Asher a photo of a girl with the words “Remember Trotter Lake” on it to remind him that she’s blackmailing him. I’m assuming Asher killed the girl in the photo and dumped her off a boat, because TV rich guys are always doing shit like that. Bonnie sees the text and assumes the girl is Asher’s new fling, and they break up. Uh-oh Asher, Bonnie is not a girl you want on your bad side… She is like one lost tube of red lipstick away from snapping.

Wes sees a picture of Levi, the guy Micheala isn’t sleeping with, and somehow remembers that he once, for five seconds saw a picture of him with Rebecca. Wes waits outside Micheala’s house to ambush Levi, who turns out to be Rebecca’s foster brother! Levi tells Wes that he thinks Annalise killed Rebecca. Wes flashes back to the nightclub and Annalise’s party wig, so I guess that means he believes him. No one trusts a woman who has a separate party wig.

Conner and Oliver look really good in their underwear.

Annalise getting dressed for her client’s sex party, is surprisingly vulnerable and adorable!

Micheala looks even better in her underwear.

Instead of having sex, Asher goes running to daddy for help. His dad looks suspiciously like Lorne Micheals, I wonder if that is a clue.

Annalise doesn’t go to the sex party, she goes to Nate’s! The job was for him! Nate is the only person on this show who is ever honest with Annalise, which is probably why she’s outside his door wearing nothing but a coat (I assume). But Nate tells her he isn’t ready to get back together yet and sends her away… and we see that WES IS AT HIS HOUSE. They’re plotting to take her down.

This is why we love this show. Because Wes and Nate (the guy who killed her husband, and the guy she framed her killing her husband) working together against Annalise is something you’d never see coming, that still makes absolute perfect sense.

So Nate is helping Wes, and the rest of the Keating 5, in the flash forward where Annalise gets shot. Do you think that means that the Keating 5 killed Keating? 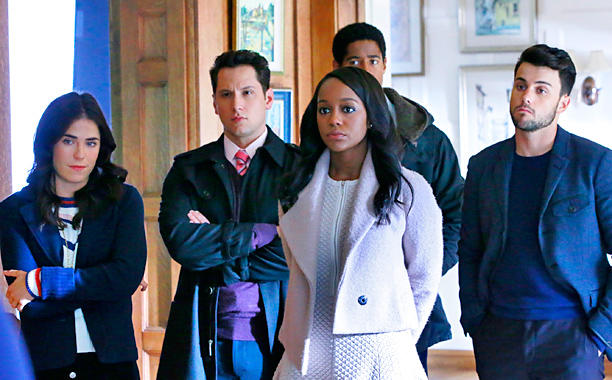 Filed Under: TV, How to Get Away With Murder, Viola Davis, ABC, recap, TV